The New Zealand Warriors have confirmed the signing of Nathan Brown as the club's new head coach - and NRL great Phil Gould as a club-wide consultant.

After being knocked back by interim head coach Todd Payten earlier in the week, the Auckland club will hand the reins to Brown, who has signed a three-year deal, and will take over at the end of the 2020 NRL campaign.

The 47-year-old has coached the St George Illawarra Dragons, Newcastle Knights and Super League clubs St Helens and Huddersfield, and was one of the first names mentioned as an option for the fulltime Warriors gig after the sacking of Stephen Kearney.

Brown joined the Warriors earlier in the year in a consulting role before being cut in the Covid-19 crisis, and initially withdrew himself from consideration for the role, before later changing his mind and winning the gig after Payten chose to turn it down.

"We couldn't be more delighted to have Nathan as our new head coach," said Warriors CEO Cameron George.

"He has had an extensive involvement in the game as both a first-grade player and then as a coach in the NRL and the Super League.

"He already has a relationship with our players, football staff and our club after being with us as a coaching consultant working with our hookers this season.

"Nathan's a terrific person who brings tremendous qualities to the role in every sense."

Brown said the Warriors' job was a "fantastic opportunity".

"I'm a career coach. I just love coaching. I spent time in Auckland during the preseason and was really impressed with the whole set-up, the players and the staff throughout the organisation.

"The Warriors are hugely important to the competition. We've seen that this year with the sacrifices they've made to keep the NRL going. I can't wait to get stuck in."

Gould will join in a consultancy role to assist the club with strategic direction, while also looking after the development of young talent to help the Warriors "rediscover their mojo".

NRL commentator and former coach Gould's role will be to "overhaul the club's pathways and development systems".

The 62-year-old former player and coach had a similar role with the Penrith Panthers.

Brown has coached in 438 games across the NRL and Super League in almost two decades of coaching, with a 50 per cent winning record.

He was in the spotlight immediately when his coaching career began as at 29 he became the youngest non-playing coach in NRL history when he took over at the Dragons.

In his time with the Dragons, Brown found plenty of success as he led the side to the playoffs in four of his six seasons in charge. Following his stint with the Dragons, Brown went to Huddersfield in the Super League, where he coached for four seasons, before moving to St Helens for another three. His teams made the playoffs in the Super League all seven seasons.

He returned to the NRL in 2016 at the helm of the Knights. He spent three years with the club, finishing bottom of the ladder twice and 11th once. During the 2019 season it was revealed he would not be the team's coach in 2020, and although he was expected to see out the 2019 season with the club, Brown left his post during the campaign. When asked about Gould before Friday night's clash against the Manly Sea Eagles, Warriors captain Roger Tuivasa-Sheck said he would add value at any club.

"He brings a lot of wisdom with him, and if the club is looking to bring him on board then I could see it as a positive to have him as a mentor around the club.

"I know he has a big impact in the rugby league community, especially in Australia, so it would be interesting to see the type of work he could do for us." 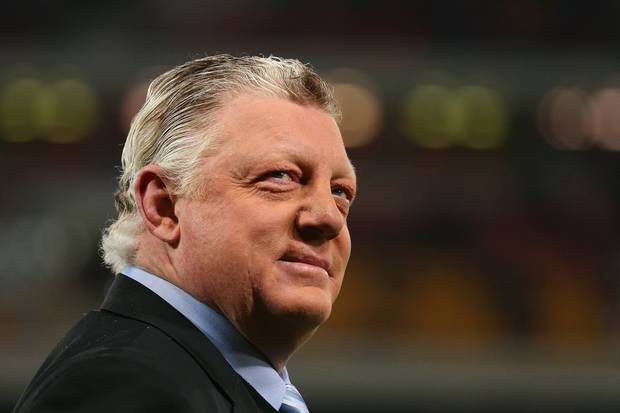 Gould has a long history in the game as a player, coach, general manager and broadcaster and has recently been in discussions with Australian Rugby League Commission chairman Peter V'landys about undertaking some projects to help the game grow in New Zealand and the Pacific Islands in a development role with the NRL.