All Black great Ian MacRae has opened up about the raft of emotions he endured after an ill-fated attempted tackle on him left an English rival confined to a wheelchair for life.

This week the 79-year-old was honoured by the playing arena at the Hawke's Bay Rugby Union's [HBRU] training base being renamed after him; MacRae Field.

A legend of Hawke's Bay rugby, he also played 45 matches for the All Blacks during the 1960s.

Such was the powerful-running midfield back's brilliance that he was named in an all-time All Black Team of the 20th Century.

But tragedy struck during the 1967 tour of Canada and Europe, when English test player Danny Hearn tried to crash tackle him while playing for Midland, London & Home Counties.

Hearn suffered a dislocated neck after his head struck MacRae's hip bone. While he narrowly avoided death, Hearn – who had six England test caps to his name – was left confined to a wheelchair.

"The team sheltered me from what was happening," MacRae told the Herald of the immediate aftermath of Hearn's life-changing injury.

"[At first] I wasn't allowed to go and see him in the hospital." 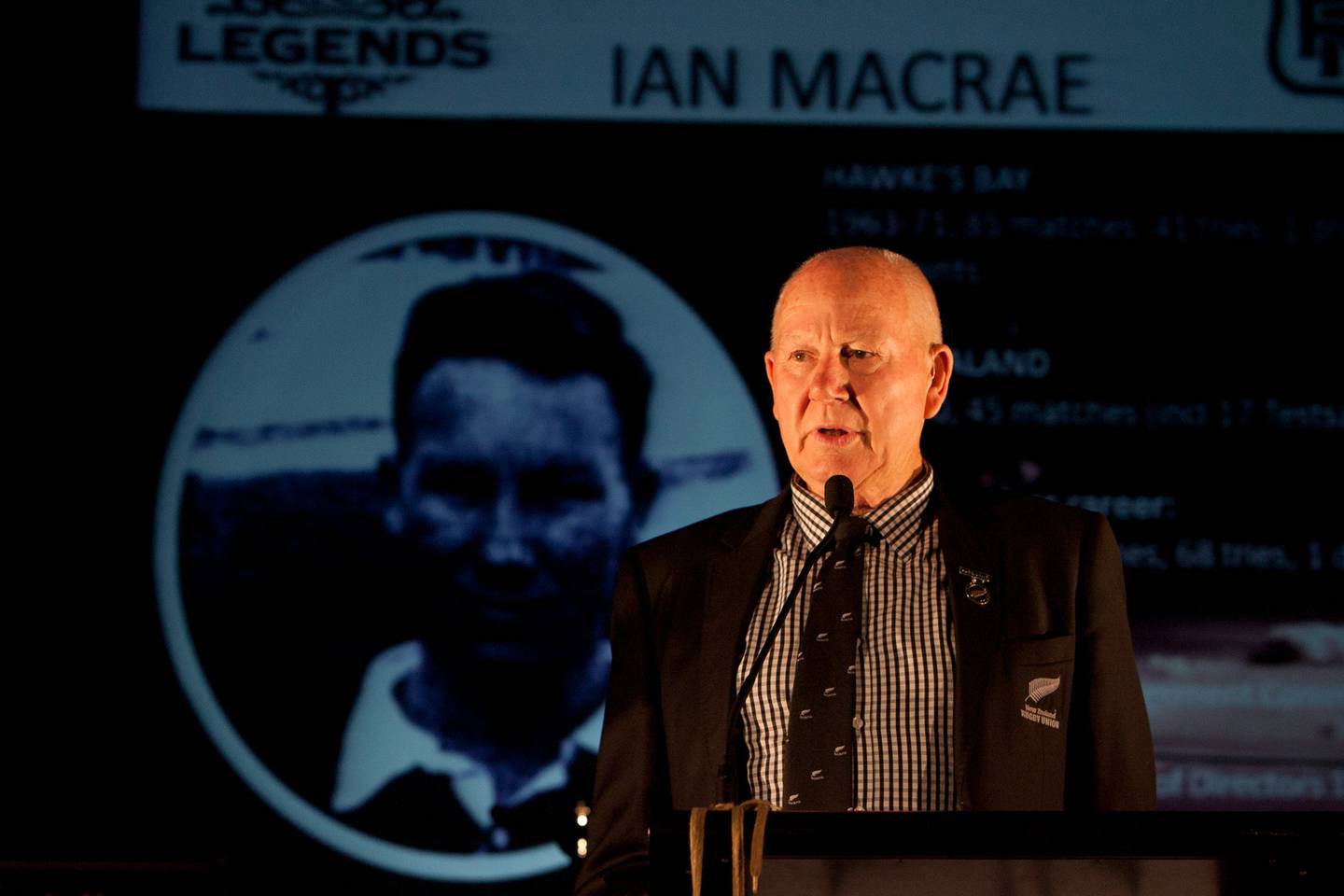 Former All Black and Magpies midfielder Ian MacRae is a living legend in the Hawke's Bay rugby community. Photo / NZME

MacRae hadn't come off unscathed from the huge collision, receiving a bruise "the size of a football on my hip".

But what threatened to be the longest lasting wounds from the incident were mental ones; living with the burden that despite no fault of his own, his opposite had been left with a severe spinal injury.

In a meeting which would result in the start of a life-long friendship, MacRae was eventually able to travel to the spinal unit at Stoke Mandeville Hospital to visit the gravely-injured Hearn before the All Blacks flew home in December 1967.

"I took a train way out to where [he was] and he just made it easier for me," MacRae said.

"He said, 'Don't blame yourself . . . I was going to cut you in half'. He was the favourite to be picked for the English test [against the All Blacks] in two weeks' time, so he wanted to make his mark.

The strong friendship that developed since that visit is now into its sixth decade.

Hearn has visited New Zealand, staying with the MacRaes while here. And MacRae has stayed with him on several trips to London. And while president of the New Zealand Rugby Union, he took Hearn into the All Black camp during the side's 2013 tour of Europe.

"He is an absolutely fantastic guy. He taught [in schools] and coached rugby out of a wheelchair when he was well enough.

"He is still fit and well but is not travelling anymore. But we still correspond."

The immediate aftermath of the tragic incident involving Hearn wasn't MacRae's only tough times while proudly wearing the All Black jersey.

His final 10 matches for the team were on the 1970 tour of South Africa. The All Blacks lost the test series 3-1 to South Africa; with the home team infamously being aided by a lack of neutral match officials. Rugby legend Ian MacRae with items of memorabilia from his career with the All Blacks. Photo / NZME

"We were a bit naive in as much we won all the midweek games by heaps, the Boks were a bit cunning and kept their good players away from us. It was hard yakka with their referees. And they had a place kicker who never missed a goal.

"Those test matches were the toughest rugby I had ever come across. It was like being in the trenches in the dressing room afterwards; everyone was bleeding and carrying on."

While he would never play for the All Blacks again, MacRae continued playing for his beloved – and adopted – Hawke's Bay province.

Born in Christchurch, he played provincial rugby for both the West Coast and Bay of Plenty before his job in the Government's then forestry department took him to Hawke's Bay.

He played 85 matches in the black and white hoops – including throughout the province's famous Ranfurly Shield tenure. Post his playing days, he has served as an assistant coach, a member of the HBRU executive and also as chairman. 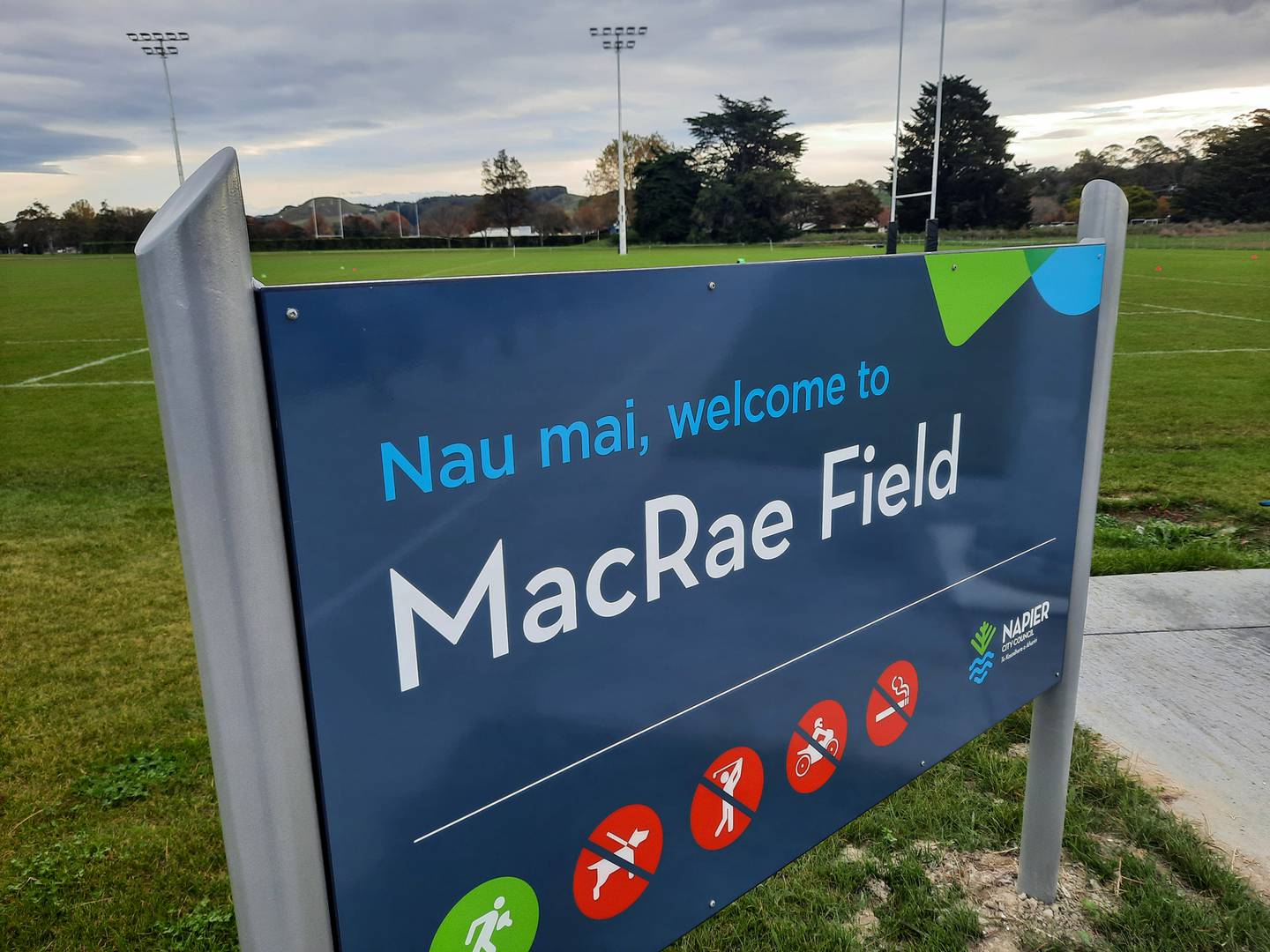 The amazing legacy of rugby great Ian MacRae has been honoured with the naming of the Hawke's Bay Rugby Union's training ground being called MacRae Field. Photo / Neil Reid

His service to the game in Hawke's Bay has previously seen him being made a life member of the provincial union.

On Monday, members of the Hawke's Bay rugby community – including fellow 1970 All Black Blair Furlong – and councillors and executive members of the Napier City Council watched on as MacRae Field was formally named.

"I was a bit apprehensive about what the secret society was all about," MacRae joked about his initial reaction to being asked if the ground could be named after him.

"But it is a huge honour.

"Sport has been my life and I was just tickled pink when the opportunity came to have the field named after me. The rest of the family appreciate it as well."

HBRU chief executive Jay Campbell said the union was "delighted" that MacRae had approved of the naming. "Mac is a legend," Campbell said.

"He an amazing player for our province and New Zealand for a long time. He also did a lot for the game off the field at provincial and national level.

"Mac being the man he is, he is a very humble man and he really didn't want to make too much fuss. But we're delighted he decided to go along with MacRae Field." 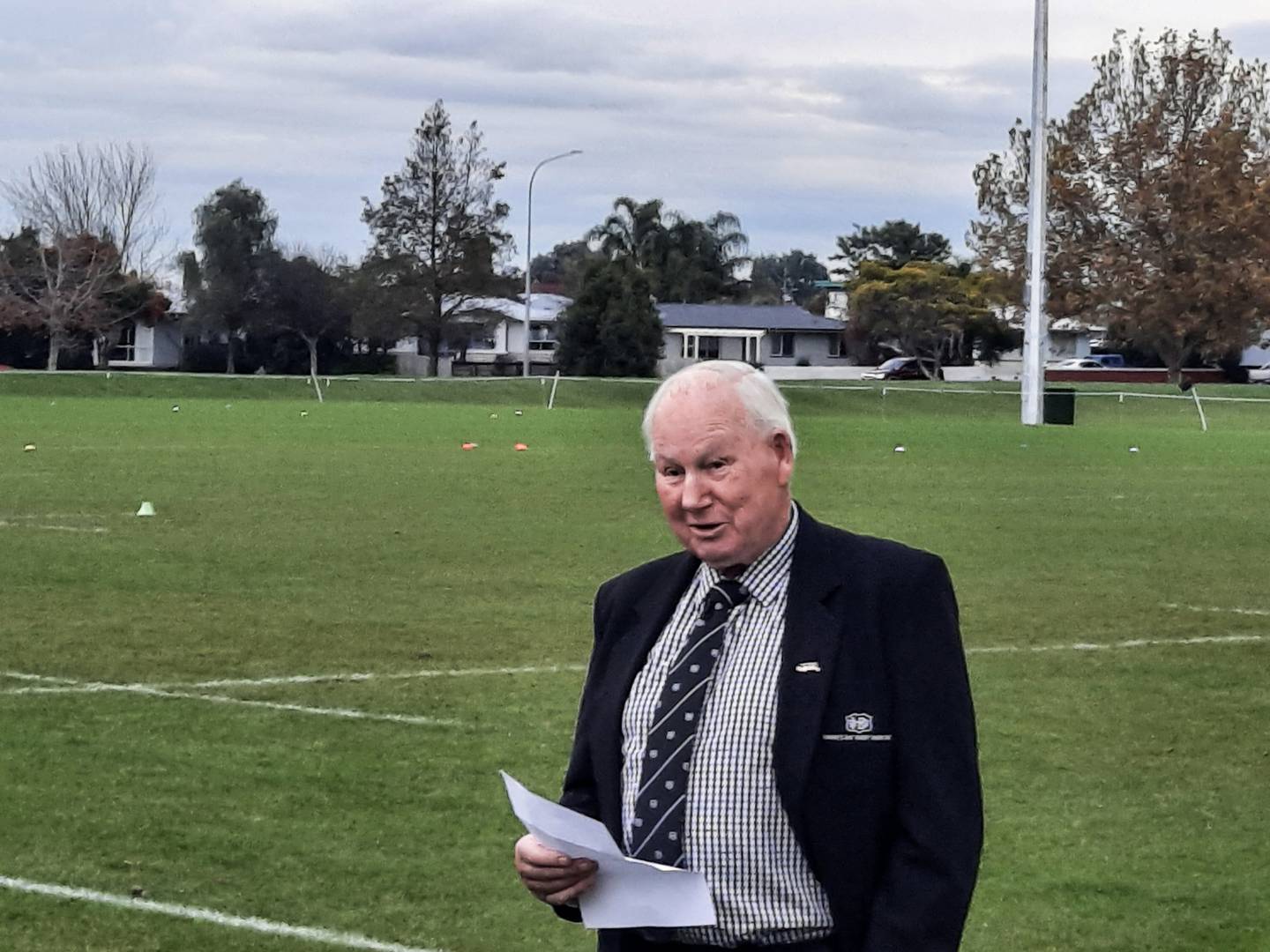 Ian MacRae makes a speech during the ceremony naming MacRae Field after him. Photo / Neil Reid

MacRae said Hawke's Bay had been a huge part of his life; both in terms of what the region had done both for his sporting ambitions and for the lifestyle it had given his family.

"I had a bit of a lead-up before I got here, I played for the Coast, played for Bay of Plenty and then got sent down here," he said.

His love for the region was so great that at the height of his All Black career he "chucked in" his Government forestry job after being told a transfer was pending.

"For me, it wasn't that big a decision to throw my job in [for rugby and living in the Hawke's Bay]," he said. 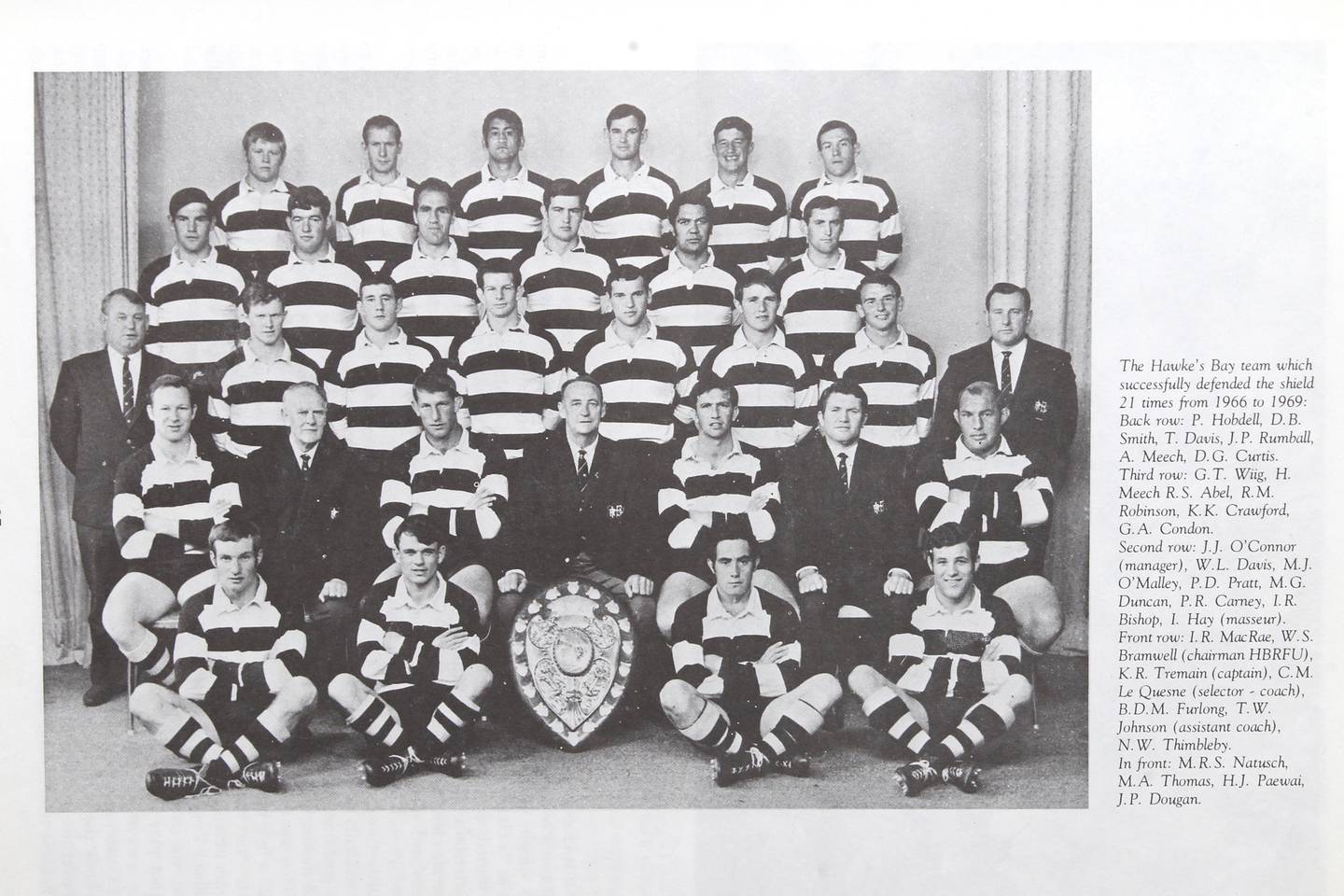 The famous Ranfurly Shield era side was "a hell of a team", MacRae recalled.

"Having the shield just stirred everyone up. We had record crowds which have never been beaten; we had close to 30,000 for a couple of games which is unbelievable.

"The whole province just lived on it. It put a fair bit of pressure on the players . . . but while you're winning, you're grinning."

More than 50 years on from those halcyon days, MacRae said it was great that the region he loves so much was again home to the Ranfurly Shield.

Speeches made during Monday's official naming of MacRae Field echoed how humble MacRae was at the peak of his playing powers; a trait that remains to this day.

He is a huge supporter of grassroots rugby, and is on the sidelines at school-aged and club rugby every weekend. 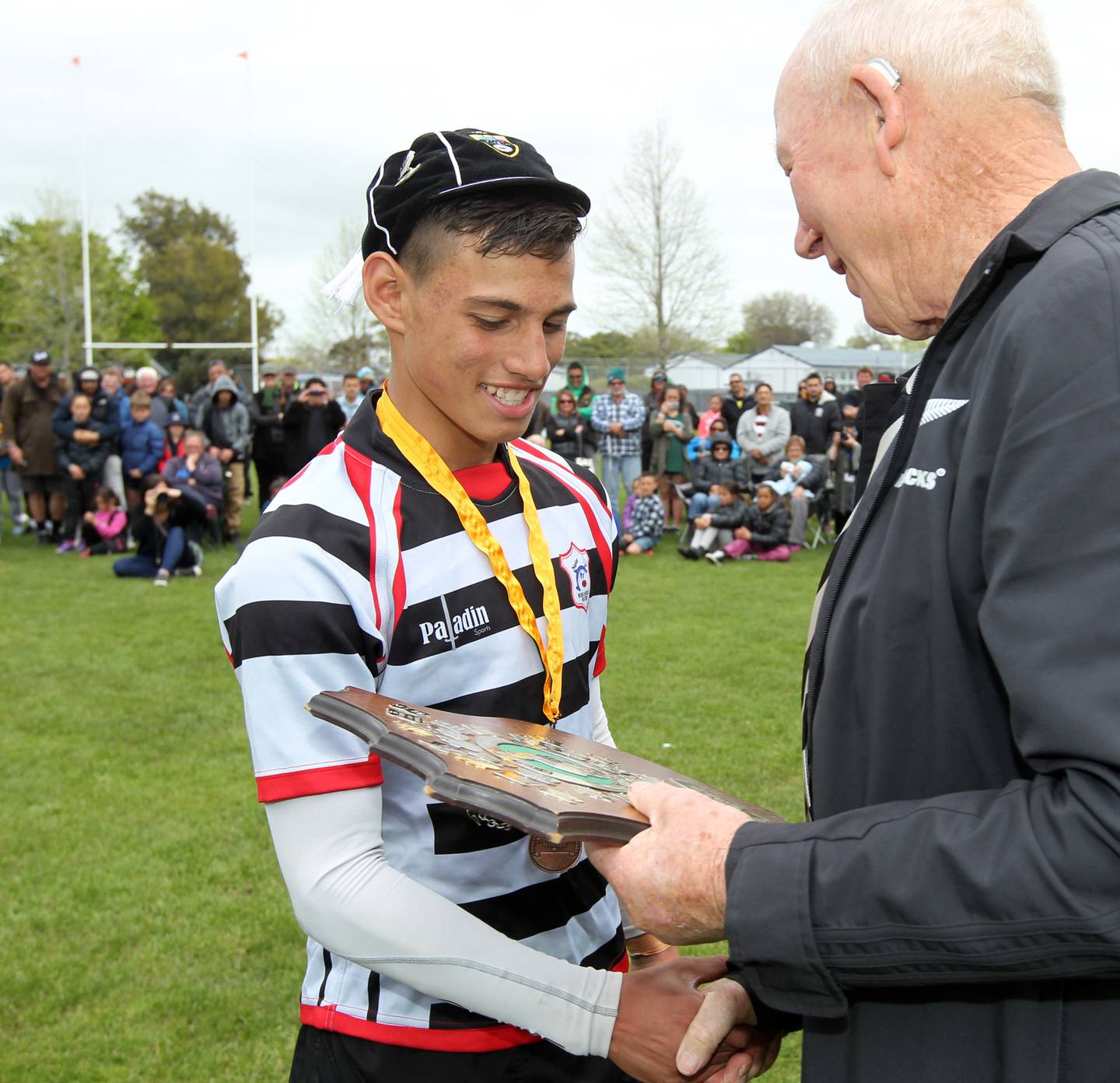 Ian MacRae is a regular on the sidelines for club and school-aged rugby on weekends. Photo / NZME

The living legend – who captained the All Blacks in three non-tests – is even known to visit the Hawke's Bay Rugby Union's HQ and make cups of tea for whoever is around.

When asked what legacy he hoped he had left on rugby, MacRae firmly answered: "Loyalty".

Lasting friendships was one of the greatest rewards he had received; with his special mate-ship with Englishman Danny Hearn firmly near the top of that list.