Coll, the world number two, was thoroughly tested by his Welsh opponent as he was forced to bounce back from a shock 3-11 loss in the first game of a match that went well past the two-hour mark and took five sets to decide. 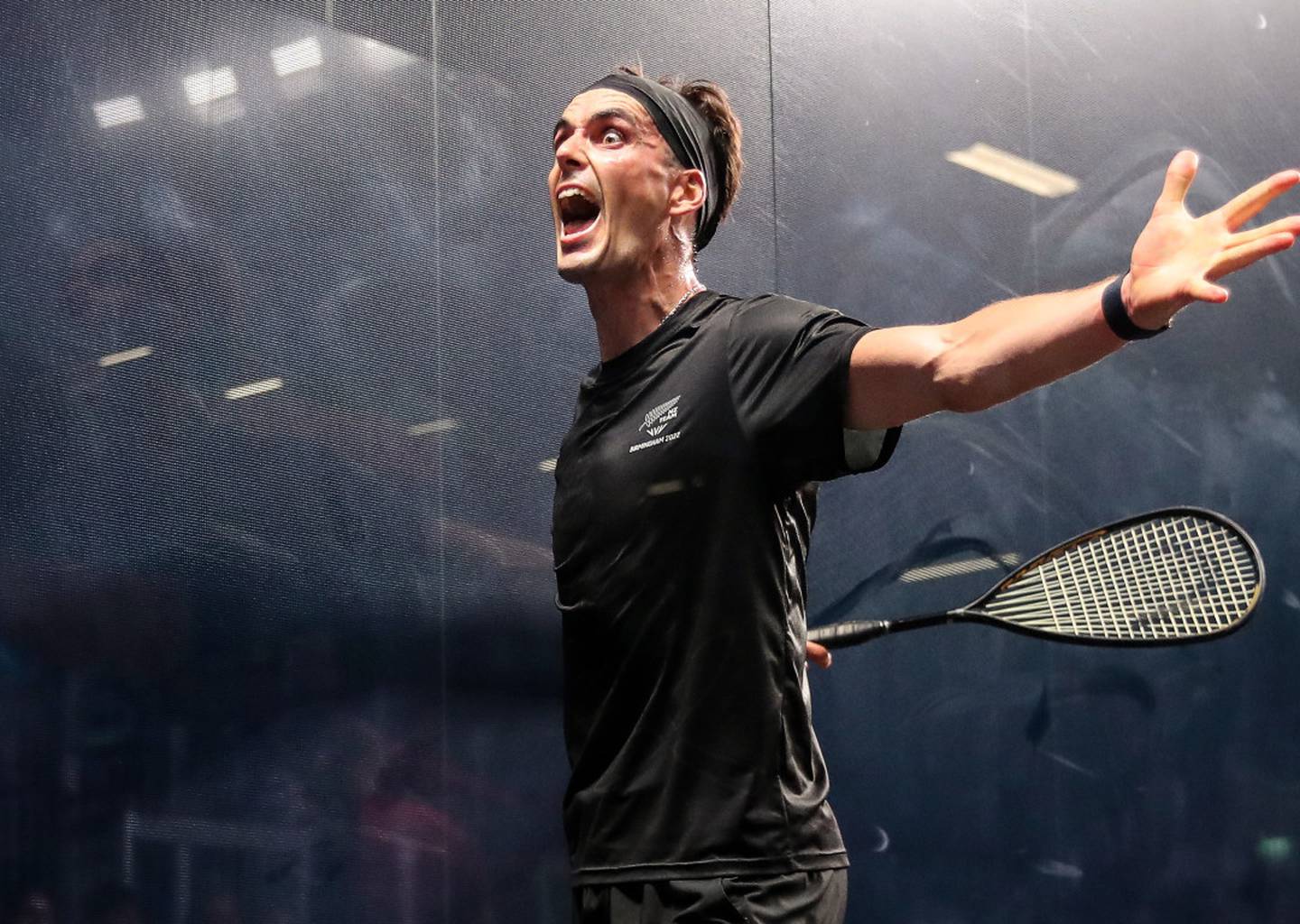 Commonwealth Games gold is just the latest of a string of elite achievements from Coll after claiming silver four years ago on the Gold Coast. Earlier this year Coll briefly ascended to No 1 in the world, disrupting the Egyptian stranglehold in squash, and last year became the first Kiwi man to win the prestigious British Open title, defending that crown again in April.

However, today's victory will mean more than any before for Coll who told the Herald last week it was an event he had been building towards claiming for the past four years.

"I couldn't be more proud of myself, I was battling out there, I was going in and out of the zone, so to find a way to win that match was just epic... it's one of the best moments of my life," Coll told Sky Sport following an emotional medal ceremony. 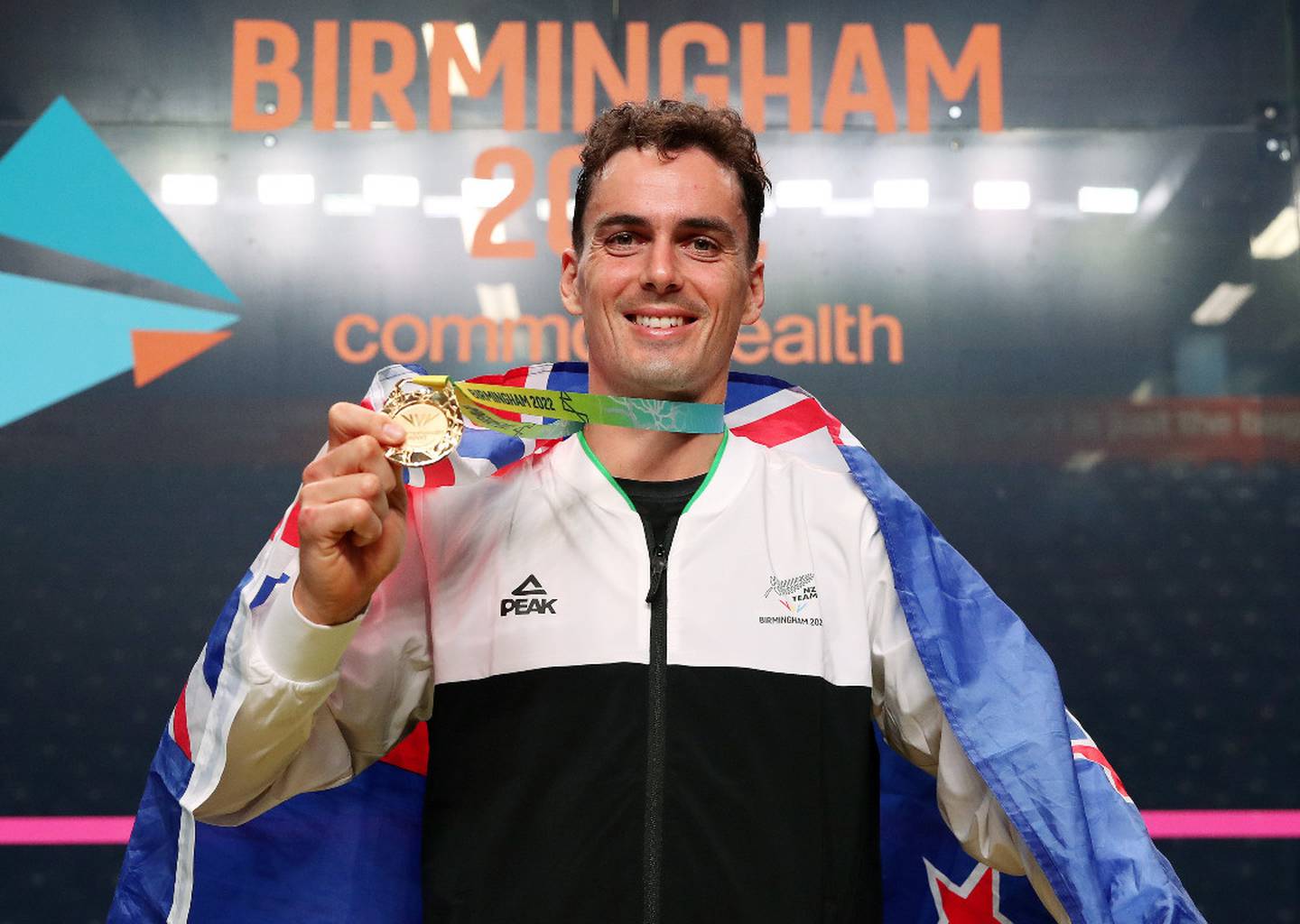 Coll recounted how challenging the week in Bimringham had been for his build-up and how the pressure he had put on himself had affected his ability to focus.

"It was a real mental battle for me today.. the first [game] was a shocking start for me, everything was going wrong, it felt like, so I just had to regroup and I'm just proud of that effort to be able to pull that win out of the bag.

"I haven't been able to sleep properly, it's been keeping me up at night, I've just been dreaming of this every night this week."

Makin, known as the Golden Tiger, began the first game with a roar, putting immediate pressure on Coll and charging to a quick 4-0 lead. Despite a break in play to change his socks, Coll never found momentum against the Welshman who played flawless squash on his way to an absolutely dominant 11-3 game-one victory.

It took until the mid-stage of the second game for Makin to commit an unforced error as Coll began to play his way back into the match. However, it took acts of desperation for Coll to find parity against the Welshman; the game stopped twice after Coll was forced to dive across the court, leaving a trail of dangerous condensation behind him.

Coll eventually took the second game 11-9 in what was a crucial turnaround and boost of confidence for the Kiwi.

Coll had spoken previous to his semi-final about the excitement in the New Zealand camp affecting his ability to calm his nerves before that match and there's a possibility the same may have occurred ahead of this one as he showed in the first half of the third game that he'd firmly settled into the rhythm of the encounter by gaining ascendency.

However, Makin wasn't done with Coll and, after winning a stroke that Coll failed to overturn with a review, he rattled off four straight points to swing the game in his favour. That momentum held for the Welshman as a flustered Coll threw his racquet to the floor after losing the third game 11-8.

Coll, the winner of the past five encounters between the pair, had now dropped two games for the first time in Birmingham and looked visibly shaken going into the fourth game.

As he did in the third game, Coll started strong in pulling out to an early 4-1 lead. The Games favourite began to showcase his superb touch in the front court as he pulled ahead with a string of winners as the ball softened, eventually forcing a fifth game by winning the fourth 11-8.

And so the two highest-ranked players in the Commonwealth Games field suitably took the court for a deciding fifth game for the gold medal.

Thankfully, Coll's trend of starting strong held, as he landed three straight winners to begin the decider, coming out on top of several long and physically-challenging rallies.

Despite showing signs of cramp, Coll showed his class and recent experience as a match winner in pulling out to a 10-5 lead that, despite a late surge from Makin, he converted into an 11-7 win to seal the gold medal. Joelle King missed out on a medal in the singles. Photo / Photosport

Joelle King's squash singles campaign has ended with more heartbreak, blowing a 2-0 lead to fall to defeat in the bronze medal match.

King, who was left in tears after being stunned by world No 20 Hollie Naughton in the semifinals yesterday, looked to have responded in excellent fashion when she went up two games to love against world No 6 Sarah Jane Perry in the decider for bronze.

It was a rematch of the gold medal final on the Gold Coast four years ago, in which King won a five-game thriller, but with King just three points away from a straight-forward victory, it seemed like there would be less drama and tension this time around.

From the relaxed player who in the first two games looked far more composed than in previous matches, King started to get agitated with umpiring decisions, and after losing seven straight points to blow a chance of victory in the third set, the 33-year-old kicked the door open in anger on her way out of the court.

Having admitted to going "mentally walkabouts" in her semifinal, after a similarly tricky marathon quarter-final, it looked as if a similar pattern was about to emerge when Perry cruised to win the fourth game 11-6, but King refocused before the deciding game.

An impressive winner that secured a 3-1 lead earned a shriek for the Kiwi, though she shortly after wasted her review as the match went back and forth.

A long rally with King leading 8-7 ended with both players on the deck, a fair summation of a brutal match that lasted for over an hour, yet King kept going – yelling in delight after earning a match ball at 10-9. Joelle King and Sarah-Jane Perry both ended up on the deck during the lengthy encounter. Screengrab / Sky Sport

But Perry, born in Birmingham and playing in front of a vocal home crowd that included her friends and family, never gave in, winning a long rally, before saving another match ball to tie the game at 11.

The pair traded errors before a drop shot from Perry saw her earn a match ball, and King was left unhappy with another decision after Perry was given a let at 13-12.

However, there would be no more complaints, with Perry executing a drop shot to seal a victory that had a touch of revenge for four years ago, and one that sent the crowd into delight.

King won't have long to get over her back-to-back defeats - she will team with Amanda Landers-Murphy in the women's doubles tomorrow, the pair having won that event in 2018, and world No 2 Coll in the mixed doubles.