After two years, 12 tests, 5638 runs and 210 wickets, the Blackcaps go into the final day of the World Test Championship needing to produce their best performance yet.

With sun finally shining on Southampton, the Blackcaps will have 98 overs to beat India and claim the inaugural test title. To do that, they'll need to produce one of the best bowling performances in New Zealand test history, then top it off with a nerveless fourth-innings batting display.

India will go into the final day at 64-2, leading by 32 runs. The equation for New Zealand is simple yet daunting - take eight wickets as quickly as possible, then try and knock off the remaining runs on a wicket where no batsmen have looked comfortable.

It would be remiss to go without mentioning the other alternative to a draw, where India put their foot on the gas, take control, and give themselves a session to bowl the Blackcaps out in a thrilling finale.

And, hey, maybe the match will be tied and the organisers will discover an obscure rule which states that, actually, the winning team will be the team who has hit the most boundaries.

Just kidding. That would never happen.

But a New Zealand victory? It sounds unlikely, largely because it is. Yet it pays to recall the similarly improbable triumphs in New Zealand's recent past.

Yes, this Indian side is better than those teams mentioned. But this New Zealand side is better than all previous iterations; a team at the peak of their powers and giving a cricketing juggernaut a fantastic run for their money, including on day five.

It's somewhat difficult to display the all-around class of these two teams in such bowling-friendly conditions, on a wicket which has produced paradoxes like Kane Williamson compiling one of the best innings of his test career, yet not passing 50.

Williamson's 49 off 177 balls showed how adept he is at reading conditions - figuring out early that India's first innings of 217 was quite a good score, and that survival should be the priority to start day five, after play was delayed by an hour due to early-morning drizzle.

The resulting conditions, combined with phenomenally accurate line-and-length bowling from India's seamers, forced Williamson into one of the slowest innings of his career, going hours without a boundary, and scoring just seven runs from the first 75 balls he faced on day five.

While he dug in to stay at the crease, battling his nagging elbow injury along the way, wickets tumbled at the other end. Ross Taylor, Henry Nicholls and BJ Watling all departed in the first session, none looking remotely settled, and two hours had passed and New Zealand had added a meagre 34-3. 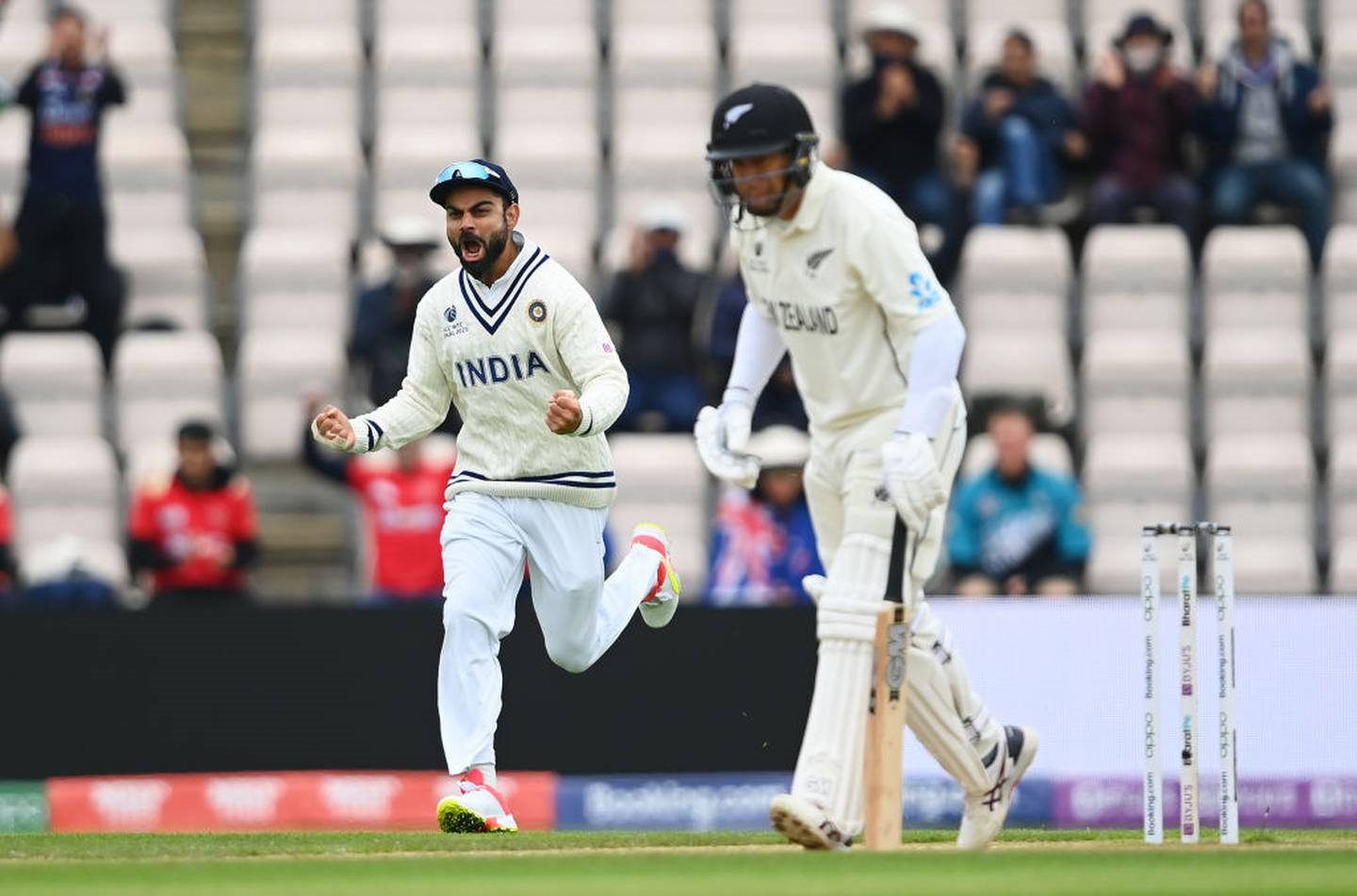 Virat Kohli was energetic as usual in the field, including for the dismissal of Ross Taylor. (Photo / Getty)

If there was one criticism to be made about Williamson's approach, it was that it didn't allow New Zealand an opportunity – if indeed there were any - to release the pressure. Perhaps it was strategic, knowing that more aggressive players were to come, and sure enough, it took Kyle Jamieson (21 from 16 balls) and Tim Southee (30 from 46) to provide the impetus to blast New Zealand out of what could have been an awkward first-innings deficit.

From 135-5, Williamson and the sloggers had fought and bashed their way to 249 and a 32-run lead, and the bowlers had a session to turn the tables, and put India under immense pressure going into the final day. 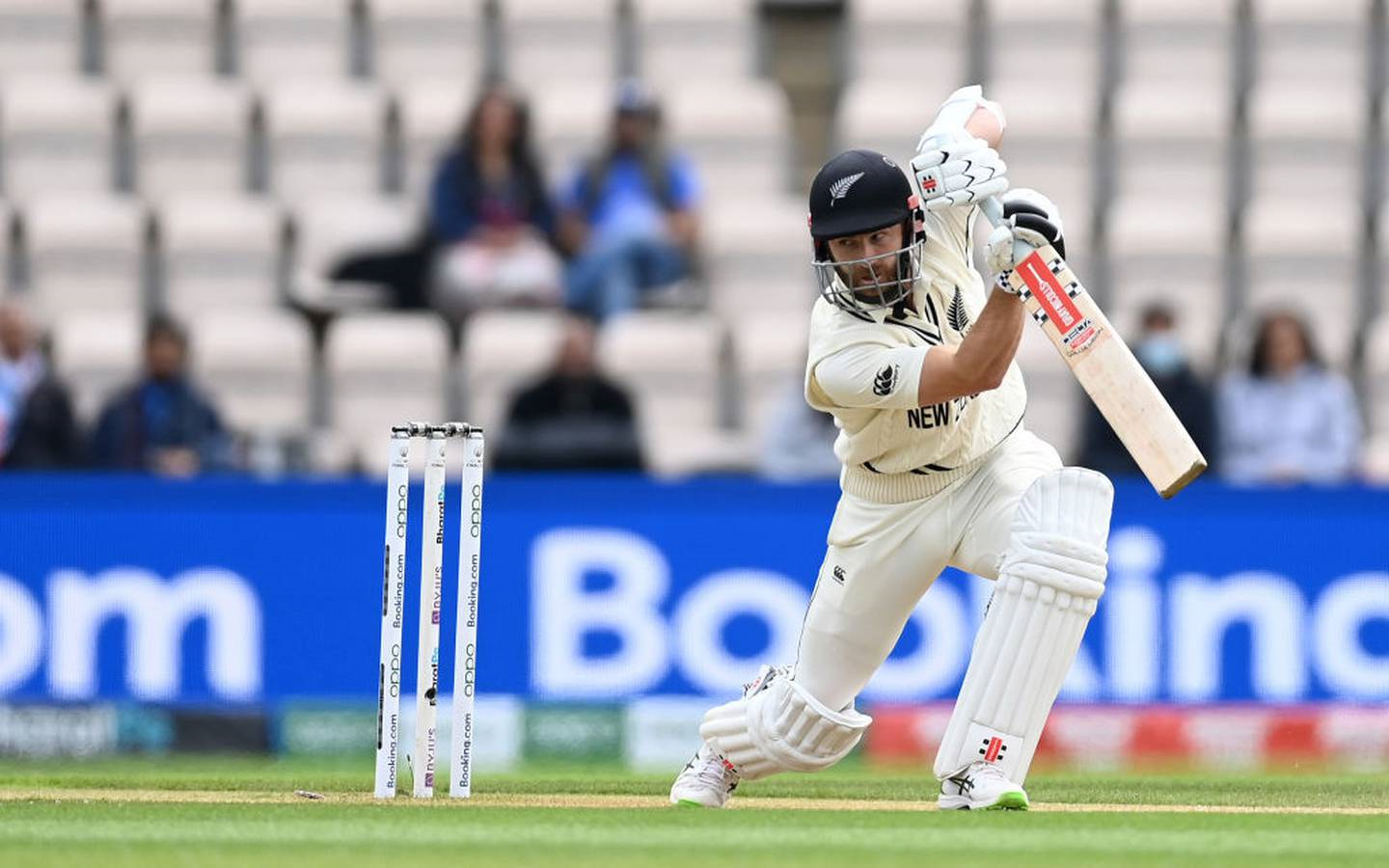 They made some inroads. Southee removed Shubman Gill lbw, and with light fading, he removed Rohit Sharma by the same method to increase the glimmer on New Zealand's horizon.

Jamieson was also dangerous, beating the bat and drawing edges regularly in his 10 overs for 15 runs, but conditions are at last getting better for batting, and are likely only to improve under the finally-emerging sun on day six.

Had two or three more wickets tumbled before stumps, the Blackcaps would have fancied their chances. Instead, India will start day six with their two best batsmen at the crease – Cheteshwar Pujara and Virat Kohli – and seven more waiting in the sheds, leaving New Zealand with one last chance to overcome the odds.