New Zealand cricket great Brendon McCullum has been named for Team Rugby as the full lineup of teams is released for the annual Black Clash.

The fourth annual event will once again see Stephen Fleming's Team Cricket take on Sir Graham Henry's Team Rugby in a T20 cricket match on January 22, with the cricketers leading 2-1.

For the first time, the fixture is heading to Mount Maunganui's Bay Oval.

Bay Oval general manager Kelvin Jones said it would be "the biggest crowd for any one-off game" the venue will see.

"It's going to be amazing ... it captures people's imagination and brings another audience to cricket."

The 10,000 tickets for the match were expected to sell out with less than 500 general admissions and 60 corporate marquees left, with large numbers from out of town.

Sir Graham has coached the rugby team all four years and said he was "delighted" to secure McCullum after crossing their fingers his schedule wouldn't be too full to play. "He was a rugby player, and as a kid, he was a very good player."

McCullum is perhaps best known for his cricketing prowess but he was also a talented rugby player in his youth.

This will be the international batsman's second time playing in the Black Clash. While he's widely known as a quick scoring Black Cap, he's played for Team Rugby every event. He qualified for Team Rugby this time on the grounds that his last competitive sports match on New Zealand soil was as a fullback for the Matamata Senior B rugby team.

McCullum – "world-class" – was an "outstanding" cricketer and person and would add to the culture and ability of the team, he said. In terms of Team Cricket seeing him named on the team, Sir Graham said he believed they'd be stoked to see their old mate on the field and welcome him with open arms.

"The cricket team has an extremely strong side ... I just think Daniel Vettori needs to bowl with his right hand rather than his left. I think that would only be fair," he laughed.

Not having Peter Fulton was something worth celebrating too, he said, because he scored well for Team Cricket last year.

He said the team was competitive and hoped they could continue the fighting spirit they had in previous games.

"We just need to play to our potential on the day."

Topping it off was being able to play at the "fantastic" venue with high ticket sales and a television audience. "We just like to see the families and the kids enjoying the day, watching their heroes in both sports play."

While he hoped to be coaching the winning team, he doubted he'd ever swap and make it on the field.

Duco Events event director Carlena Limmer said securing McCullum as the final piece in the puzzle is "a masterpiece acquisition for Team Rugby".

"Clearly, he qualifies for rugby given his rugby playing credentials and he certainly can play a bit of cricket." 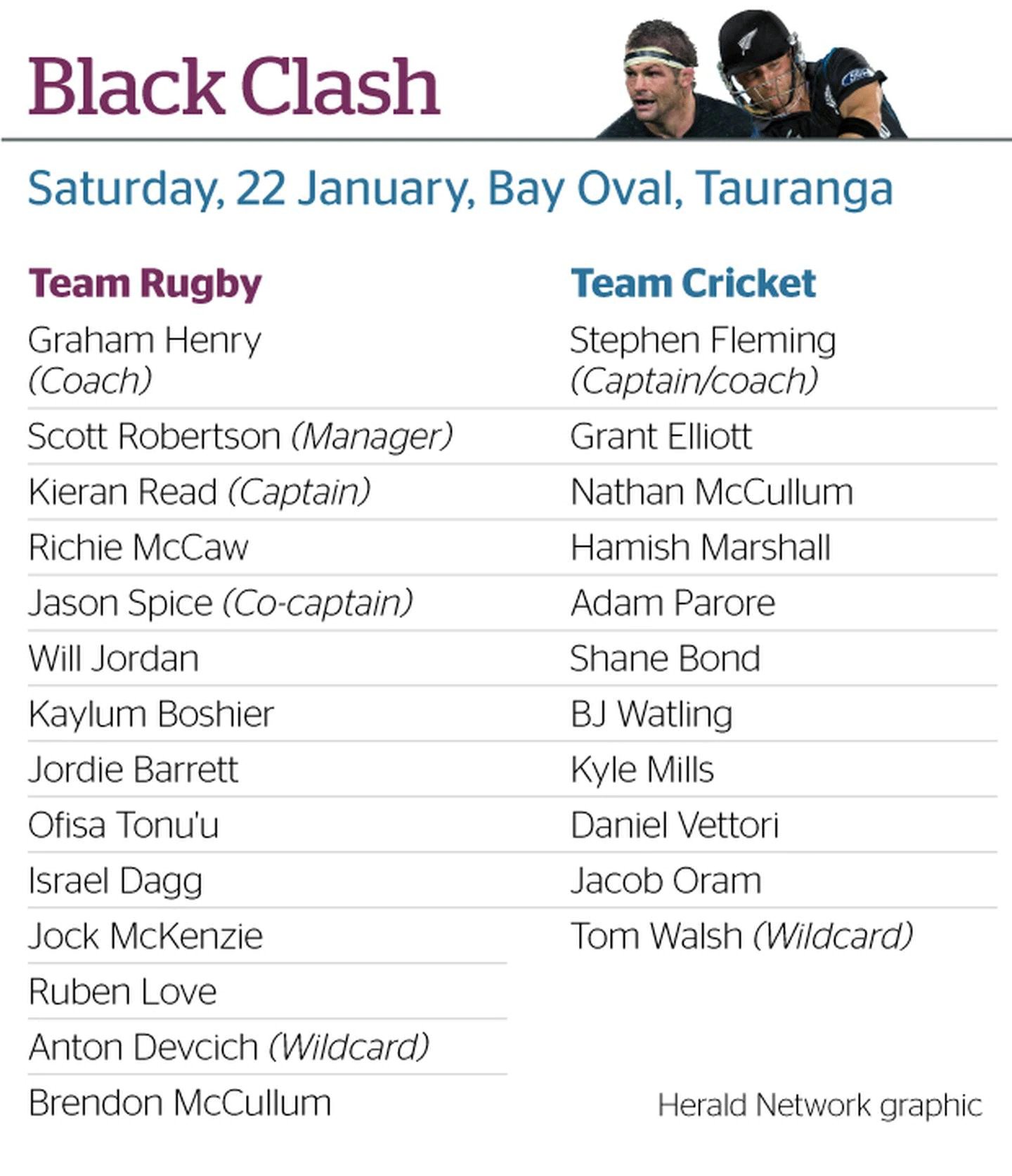 She said McCullum is the player fans continually called for, and his presence would add to the Black Clash experience.

The game helps raise money for the welfare funds of the New Zealand Rugby and Cricket Players Associations.