Cricket hero Trent Boult has apologised to New Zealand fans for "letting everyone down" as the first group of Black Caps touched down in Auckland following their heartbreaking World Cup final defeat to England.

Boult was one of a handful of players to return to the country after Monday's final, during which scores were twice tied and the Black Caps were beaten to a first World Cup triumph on a boundary countback.

Boult bowled both the final over of the 50-over match and the Super Over in which England scored 15 runs, after earlier taking a catch on the boundary, only to stand on the boundary cushion.

The left-arm seamer, who was one of the leading wicket-takers in the tournament with 17 scalps, admitted it would take some time for the players to get over the final result.

"It's been a long flight home but it [the defeat] probably hasn't sunk in yet. I wish it would, so we can all get over it but it's one of those things that we probably won't get over for a long time."

Boult said the final over - in which the Black Caps conceded a controversial six runs after a throw from Martin Guptill struck a diving Ben Stokes' bat and sped to the boundary, effectively sending the final into a Super Over - continued to haunt him.

"It's natural to nitpick, to wonder about all those little things and how it could have been a totally different game. I've been living that last over in my mind a lot - somehow I got hit for six along the ground which has never happened before. To see the scores level [after the Super Over] and still lose, yeah, that was a pretty unique situation." 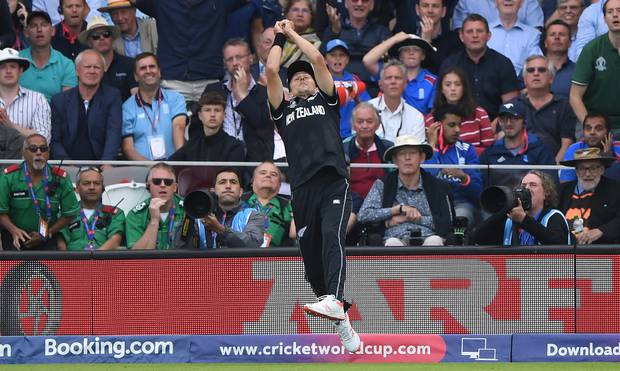 Trent Boult takes a catch off Ben Stokes only to step on to the boundary rope and concede six runs during the World Cup final. Photo / Getty

Talking about his catch of Stokes, that ended up going for six runs, Boult revealed that Guptill (who was running in to his left) tried to warn him that the boundary rope was close.

"The priority in that situation is on the ball itself, so that was all I was worried about. It was silly of me not to know where the rope was. It was similar to the catch against the West Indies earlier in the tournament but they're quite quirky boundaries over there [at Lord's]. They're not circles, they're kind of octagons and squares and all sorts of things.

"You can imagine the feeling when my left shoe hit the cushion and it was too late to throw the ball to Marty. There were probably 27,000 intoxicated Poms in there screaming as the ball went up, so I couldn't hear anything Marty was saying."

The messages of support from the public have been overwhelming, Boult said.

"We've just been on a plane 15 hours and there were a lot of Kiwis saying 'we felt for you'.

"I didn't really know what to say. Obviously, we're all hurting and we're sorry for letting everyone down. I just want to get home, walk my dog along the beach and try to forget about it but it's gonna be a hard one to swallow for the next couple of years."