Smith had looked in fine form as he closed in on another test century, but stunning work from Neil Wagner and Henry Nicholls saw the Australian star trudge back to the pavillion for 85.

Australia had added just 27 runs in the first hour before drinks, with the Black Caps bowlers again restrictive without being entirely dangerous, but Wagner made the key breakthrough with a brutal bouncer which Smith couldn't avoid.

The delivery flew off Smith's bat handle and gloves, and ballooned over gully, where Nicholls rapidly backpedalled, before reaching out one-handed and clinging on with his fingertips for a superb back-handed grab.

Wagner paid tribute to the catch, and Smith's innings, when interviewed at the lunch break. 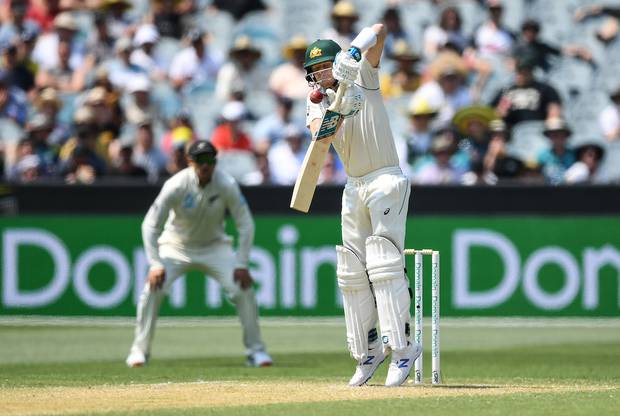 "A great catch - unbelievable. From Tim [Southee]'s catch yesterday to Henry Nicholls - the boys keep fighting in the field, that's all we can ask for, and just keep fighting for these next couple of wickets.

"[Smith] is a class player, you showed any time you pitch the ball up, he's in control. I thought he played really well this innings, showed a lot of patience, he was prepared to duck a long time.

"I just got one which was a nice delivery, rising on him - it just happens, I guess."

The wicket reduced Australia to 284-5, and it looked as if the Black Caps had a way back into the test. The following eight balls saw Tim Paine miss a drive from Wagner's first ball, Travis Head nearly chop on with an inside edge from Trent Boult, a near run out, and another terrific short ball which Head barely managed to fend off.

"It feels like the whole game has changed with that wicket," Kiwi commentator Ian Smith said.

However, after the brief barrage, Australia settled back into their work, with Head moving through to 57 and Paine quickly reaching 33.

Black Caps spinner Mitchell Santner again struggled, conceding 12 off one poor over before lunch as Australia reached the break at 336-5, and remaining well on top. 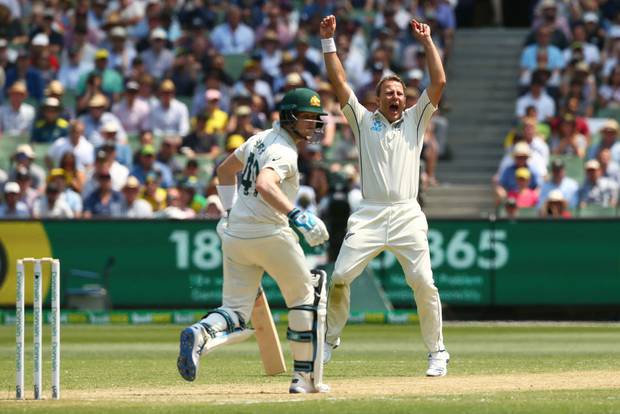