Black Caps coach Gary Stead has explained his controversial decision to drop Tim Southee for the third test against Australia at the SCG.

Southee was a shock omission amongst the Black Caps' remarkable five changes for the final test of the series, with the senior bowler left out with seamer Matt Henry and the dual spin attack of Todd Astle and Will Somerville all preferred.

It was a curious decision given Southee had taken 12 wickets at an average of 26 in the first two tests, and it perplexed former Black Caps skipper Brendon McCullum, who said the call left him "staggered".

The bold call didn't pay off on day one either, with Henry – who now averages 51 with the ball in test cricket – rarely threatening, while Somerville and Astle similarly went wicketless; trio combined for figures of 51-1-169-0 as Australia reached 283-3 at stumps.

However, Stead explained that he was hoping – and still hopes – that Henry will provide a point of difference due to his extra pace.

"We just felt we wanted a bit more pace out there with what Matt offers over Tim. The workload that Tim's had, not just in the last two tests, but you put the last four together it's somewhere around about 200 overs in a short period of time. I just felt what Matt offered might have given us a point of difference," Stead said.

One option could have seen Southee – who was understandably disappointed by the decision – alongside Henry, Neil Wagner and Colin de Grandhomme in a four-pronged seam attack, with just the sole spin option, but Stead argued that the SCG wicket dictated the use of two spinners.

"When we looked at the wicket, it looked like a wicket which had been used in the past. Apparently it hasn't been, but it definitely looked that way - it was certainly very dry. When we were down here for training two days ago, they'd put a lot of moisture in to it and thrown some grass clippings on it which is a good sign that it's very, very dry. In the end, once the decision was made to play two spinners, then it was about working out how we manage those quick bowlers after that."

Southee's absence wasn't the only drastic change, with captain Kane Williamson and batsman Henry Nicholls failing to recover from their illness, allowing a surprise debut for Glenn Phillips, and an unexpected return for Jeet Raval. 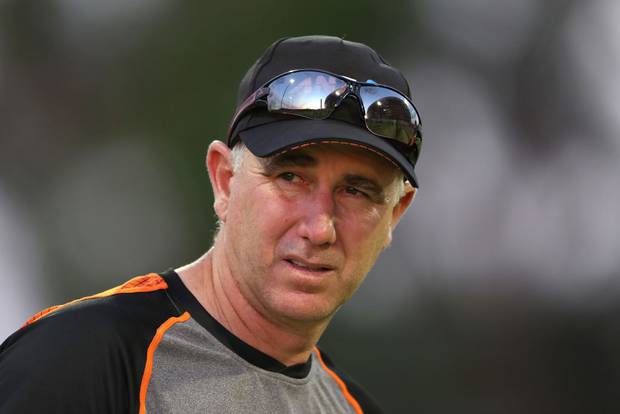 With their backs against the wall, Stead is hoping that at least those decisions will pay dividends when the Black Caps get a chance to bat.

"There's an opportunity for one new guy, and one who's been there before who probably didn't expect to get this opportunity, to go out there and make a name for themselves.

"We live and die by those decisions - we'll want them to stand up and be the best they can be."