Australian Open organisers have been slammed for their handling of a situation that saw spectators ordered to remove items asking "where is Peng Shuai?"

Tennis Australia (TA) stood by what many are labelling a heavy-handed decision after video emerged on the weekend of security and police requesting a fan at Melbourne Park remove her shirt highlighting the plight of the Chinese tennis star — who sparked worldwide fears when she "disappeared" after making allegations of sexual abuse against a former top-ranking member of the Chinese Communist Party.

Peng has since been seen in videos and photos shared by Chinese state media but there are concerns those were staged and human rights activists have questioned whether the former doubles star is able to act freely.

The video at the tennis ended with police saying TA was permitted to confiscate any paraphernalia that referenced Peng. 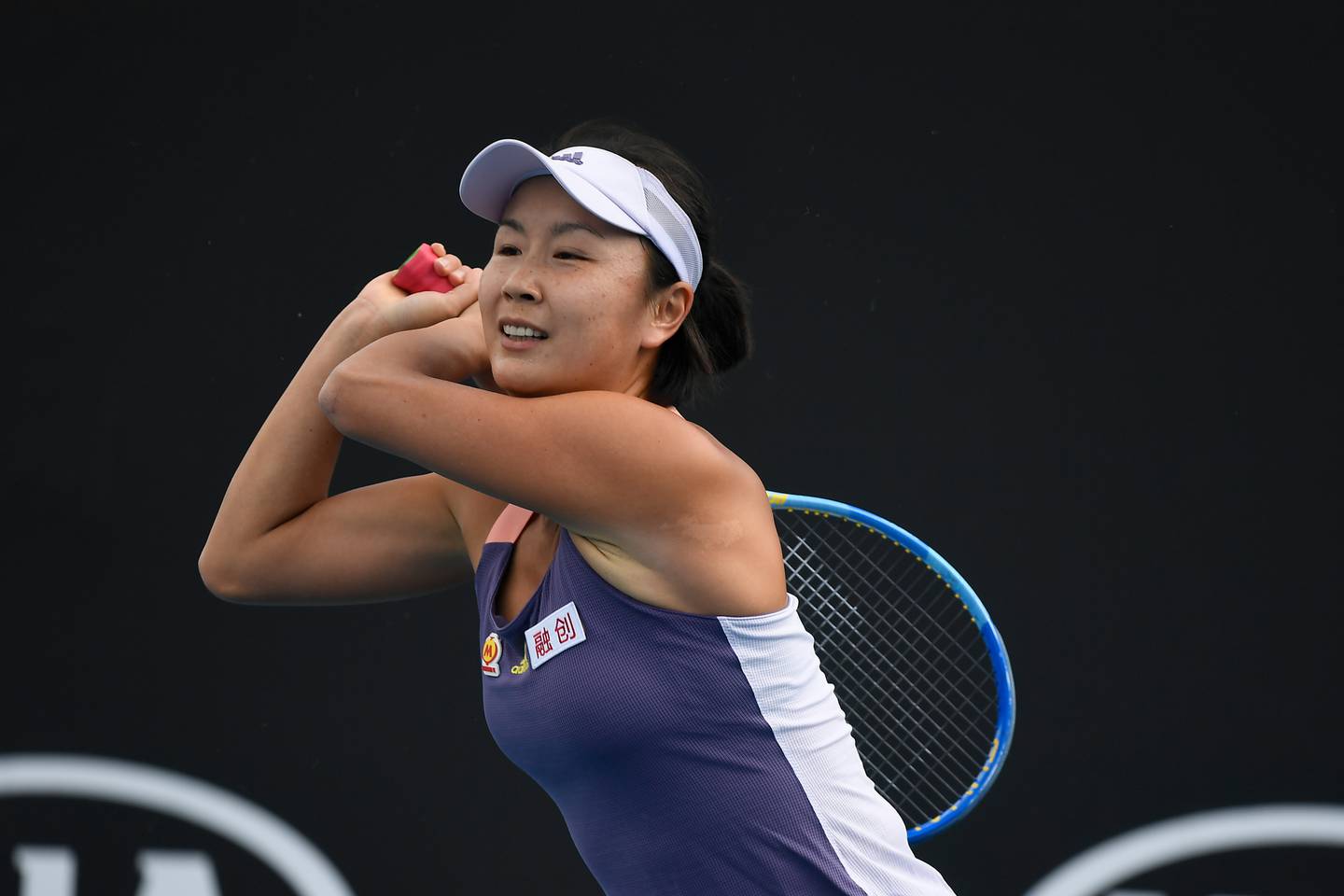 Peng Shuai of China in action at the 2020 Australian Open. Photo / Getty

TA told News Corp Australia it feared for Peng's safety but fans were not permitted to make political statements with their clothing at the Australian Open.

"Under our ticket conditions of entry we don't allow clothing, banners or signs that are commercial or political," a Tennis Australia spokesperson said.

"Peng Shuai's safety is our primary concern. We continue to work with the WTA and global tennis community to seek more clarity on her situation and will do everything we can to ensure her wellbeing."

Drew Pavlou posted footage on social media of his friend Max Mok and another person being confronted by security about their Peng Shuai attire, and Mok hit out at TA's reaction.

"I can remember him (the security guard) saying over and over that he had been instructed by someone higher up to confiscate (the Peng items)," Mok told Nine newspapers.

"On top of that, he also kept saying - and I don't think this was in the video - but he kept saying he had eyes and ears everywhere, you can't hide, things like that. Who exactly am I hiding from?

"He said someone found it political and reported it, but couldn't say who.

"I would be surprised if someone at the ground reported us."

Pavlou spruiked a GoFundMe page to print more "Where is Peng Shuai?" T-shirts and on Twitter revealed it had already raised nearly $6000.

Mok said it was hypocritical of TA to say Peng's safety is its "primary concern" and then treat him how it did, and is hopeful more people will show overt support of the Chinese star by following their lead at Melbourne Park.

"Hypocrisy is an understatement. It's not sincere, and it's just a way for them (TA) to avoid a PR disaster," Mok told Nine. "You can see that from the huge amount of support we've got from the public. If we had less support, this could have gone very wrong.

"If Tennis Australia is serious about the movement, they'll let people in (with Peng-related items). Time will tell which side they're on.

"Regardless, it will be a good message to send not just to Australia, but internationally. Imagine a whole court filled with 'Free Peng Shuai' shirts?"

Plenty of people shared Mok's outrage and laid the boot into TA. Daily Telegraph federal politics editor James Morrow tweeted: "How is asking 'Where is Peng Shuai?' political? Could possibly understand not wanting 'Sack ScoMo' or 'Andrews is a POS' signs but this is something else again."

Aussie comedian Shaun Micallef wrote: "Only in mainland China would asking after somebody's whereabouts be regarded as a political statement.

"I get if a hotel says 'No thongs', asks you to leave and then calls the police if you don't because the police can see that you're wearing thongs. I don't think the police can look at a 'Where is Peng Shuai?' T-shirt and just as easily tell that it's a political statement."

"Say this: it throws @WTA courage/principles into still sharper relief."

Australian broadcaster Stephen Quartermain added: "Really bad call by @AustralianOpen on the Peng Shuai situation. After the Djokovic saga … All their goodwill built up over many glorious years is quickly evaporating."

Sportscaster Corbin Middlemas tweeted: "The only language they (TA) speak are dollars and eyeballs, you can leave your moral compass at the door." 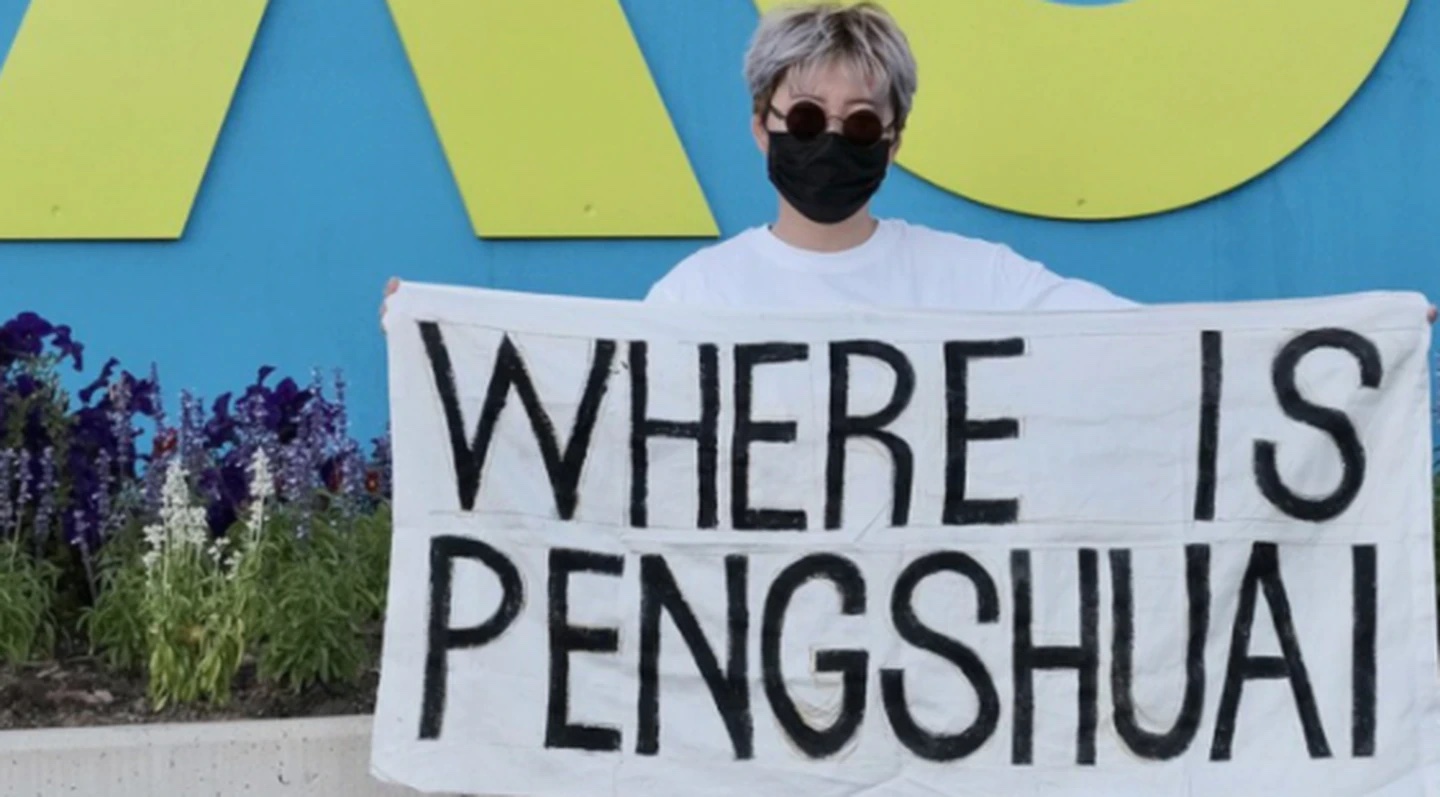 She was not heard from for weeks, sparking fears about her wellbeing, and then reappeared to deny making the allegations of sexual assault saying her social media post was misinterpreted.

There have been calls within the industry for more transparency from Beijing over Peng's whereabouts, with concerns she is being censored.

Women's Tennis Association Tour chairman Steve Simon announced the women's tennis circuit was suspending all tournaments in China over concerns about the safety of Peng.

Multiple players were asked about Peng during the first week of the Australian Open. Speaking after her win on Wednesday, Australian star Ash Barty said the tennis community had come together to look out for Peng's safety and hoped she was doing OK.

"Hopefully it's not too long until we see her back out here," Barty said.

A reporter then asked whether Barty was concerned that there was something "sinister" at play, but she couldn't answer.

"I've got no idea. Without the information, I can't answer that question," Barty responded.

Fellow Aussie Nick Kyrgios said he believed "obviously" something wasn't right with the situation but admitted he didn't know much about it.

"Obviously if that's still something that's ongoing it needs to be found out and kind of, I guess, we need more awareness about it. We can't forget about her," Kyrgios after a singles match.

Belarusian Victoria Azarenka, who is on the WTA Player Council, said the main goal was hearing from Peng personally.

"There hasn't been that much development in terms of contact with Peng Shuai even though from our side we will continue to make any and all efforts to make sure that she is safe, she feels comfortable," Azarenka said.

"Hopefully we will get to hear from her personally at some point. I think that's the goal, the main goal right now."

"I'm not sure if that's concerning or not," she said. "But I think the WTA, the whole organisation, they handled it really well. I'm really proud of them.

"I feel like it's a situation where we need more information, which is definitely really hard. Kind of, I think everyone is waiting."

If you've ever experienced sexual assault or abuse and need to talk to someone, contact Safe to Talk confidentially, any time 24/7: