Daniel Jones made it back-to-back wins at the Auckland Marathon today with an accomplished run, finishing just three minutes behind the course record to claim the title in 2:20:22.

The Wellington Scottish athlete lined up as one of the favourites and delivered once again, despite a last-minute change to his race strategy.

"I kind of realigned my race strategy mid-week because I'm actually racing the Tarawera Ultramarathon 102km in a few weeks and thought maybe I tempo it but with Omicron and you don't know what races going to come up I changed up my strategy mid-week, just when races are on you've got to go for it so yeah, just raced hard," said Jones.

Jones said he stuck to his race place despite eventual runner up Cameron Graves going out hard.

"I went out with Cam for the first few km's and let him get 100, 200 metres on me and thankfully I was just able to control the pace and bring it back slowly.

"It's just fantastic. I was just saying yesterday, it's probably the first time being up in Auckland again since probably last time I raced and it's always a good atmosphere at this race, people ride along the course cheering you on, so it's very much appreciated especially in the heat of the day." 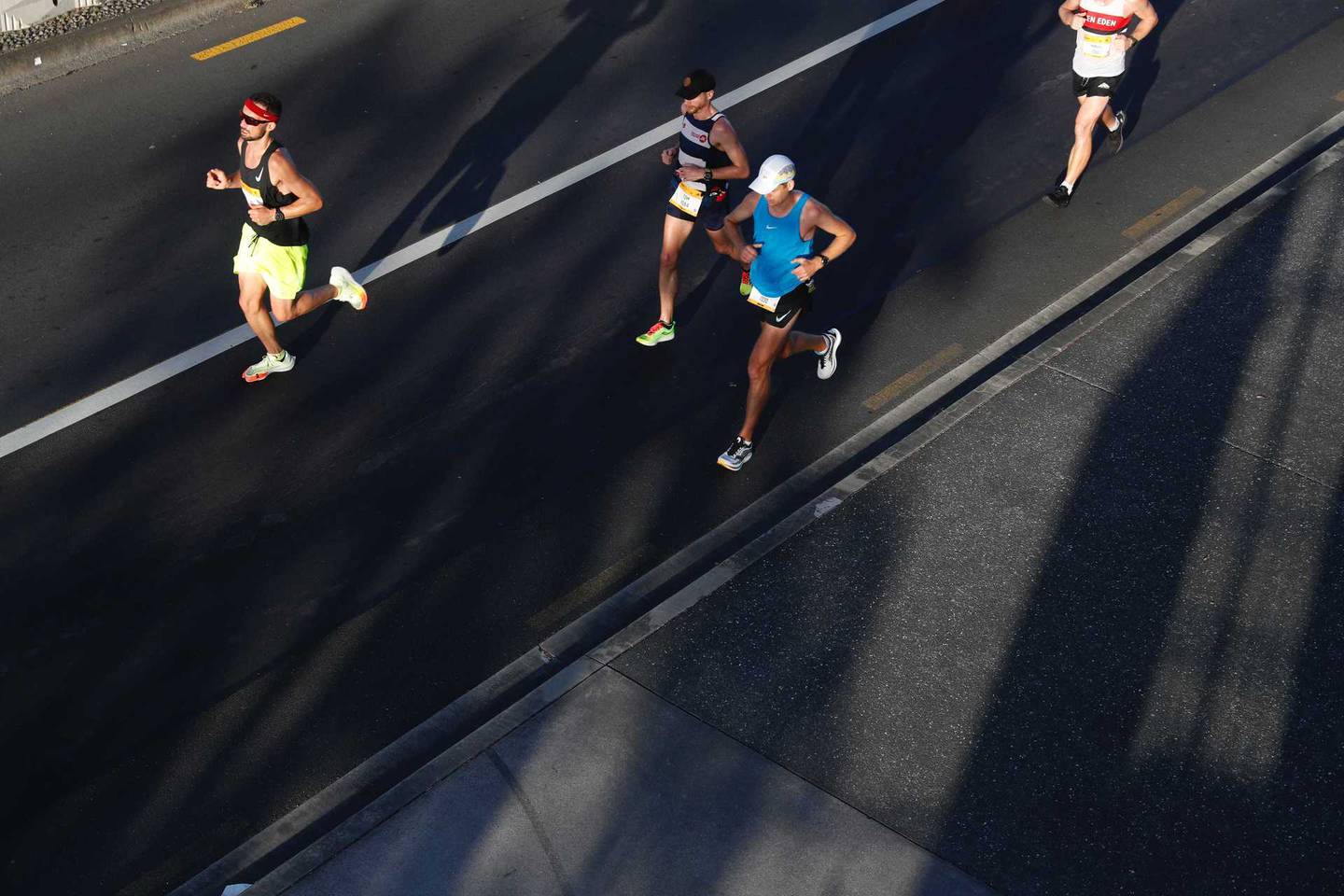 Graves, racing his debut full marathon in his hometown, finished seven minutes behind Jones in 2:27:44.

Graves lined up at the Devonport start with lofty ambitions, chasing a time of 2:14 – in what would have been a three-minute course record – in order to achieve a Commonwealth Games draft standard qualifying. The Auckland athlete had form at this event, having broken the half marathon course record at the 2020 ASB Auckland Marathon, but despite a fast start it wasn't to be.

"That was tough. My first marathon, made my debut today, went out with pretty big intentions to get the Comm Games draft standard but I was a good 14 minutes off it," said Graves.

"I was tracking well until about halfway and then on the waterfront down to St Heliers it kind of fell apart and ended up walking for 10 minutes, but my fiancé motivated me to keep going and so I picked myself up and got over the line in second, so happy to get it ticked off, first one out of the way anyway."

Despite a testing race, Graves said he loves the atmosphere of the Auckland Marathon and was proud his hometown had reached the 30-year milestone. Irish runner Ciaran Faherty, now living in Queenstown, bettered his 2018 Auckland Marathon finish by one to claim third in 2:32:09.

Auckland's Lisa Cross rolled back the years to secure her second Auckland Marathon title, 10 years on from her first in 2011.

Cross found herself out on her own for most of the race, pulling clear of her closest rival, England's Hannah Oldroyd, in the early stages.

"It's awesome," said Cross. "I would've liked to have beaten my time but its 10 years on and it's a lot hotter, but I did everything I could.

"I was just on my own the whole way so that made it tough," she said.

Christchurch-based Oldroyd finished two minutes behind Cross in 2:52:52, with Ali Campbell rounding out the women's Auckland Marathon top three in 3:00:38.

Otago's Katrina Andrew elevated herself to the top of the podium in the Half Marathon, one-upping her previous best finish in 2019. 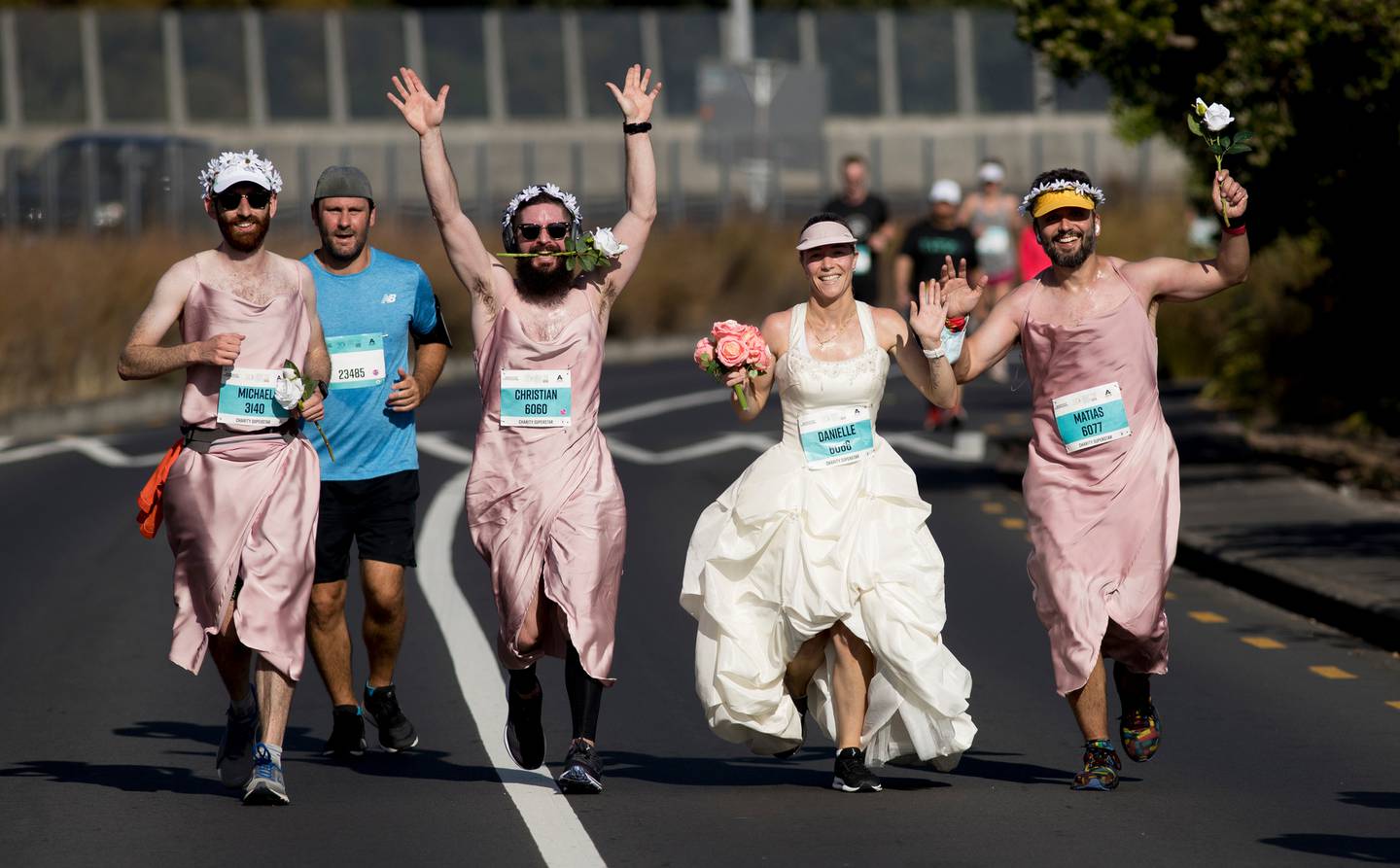 The ASB Auckland Marathon which is celebrating its 30th year of the event. 23 January 2022 New Zealand Herald photograph by Dean Purcell.

"That was the perfect race for me, couldn't have asked for better and everyone on the side-lines was amazing so I actually really enjoyed that, it was good," said Andrew.

Esther George finished second in 1:21:16 and Karen Donaldson-Barron secured another top three finish in the Half Marathon with 1:23:43. The ASB Auckland Marathon which is celebrating its 30th year of the event. 23 January 2022 New Zealand Herald photograph by Dean Purcell.

Michael Voss, a last-minute entry into the Half Marathon, claimed victory after 21km.

"I wasn't actually planning on entering this race until about Thursday, because I'm actually training for another event, the Tarawera Ultramarathon for the 102km, but just with Covid and everything I just wanted to get a race in, so I thought I'd freshen up on Thursday," said Voss.

Christopher Dryden and Casey Thorby added a youthful look to the podium, with 22-year-old Dryden placing second in 1:09:24 and teenager Casey Thorby running an impressive 1:10:00 in his debut elite half marathon race to finish third.