After the All Black tears in Yokohama, a little bit of joy in Tokyo. This Rugby World Cup bronze playoff victory over Wales means very little in the big scheme of things, and it won't make up for last weekend's semifinal devastation at the hands of England, but there was joy nonetheless tonight and pride too.

There will be a satisfaction that Kieran Read, Ryan Crotty, Sonny Bill Williams and Ben Smith have been farewelled in an appropriate manner. Read, who ran on with a smile on his face and was looking as happy as he has all week, led the haka in his 127th and final test, with the other three also heavily involved as the All Blacks maintained their winning record over Wales, who last tasted success way back in 1953.

Right wing Smith said during the build-up to this unloved fixture that he just wanted to do his family proud. He certainly would have done that; his consecutive tries at the end of the first half providing the buffer the All Blacks needed to express themselves in front of the newly-arrived Emperor and Empress after the break.

The 33-year-old, who hasn't started a test since the World Cup warm-up against Tonga in early September, rediscovered the running lines and sidestep that have made fools of international defences for the last decade. He was over straight after the break too only to have the try ruled out due to a contestable forward pass.

"One more chance", Aaron Smith yelled with only a few seconds remaining in the first half and the All Blacks awarded a penalty. Quick ball provided it and his namesake was over in the right corner via a flat pass and a palm in the face – a Bender fender - for halfback Tomos Williams. He's clearly still got a bit of magic left. 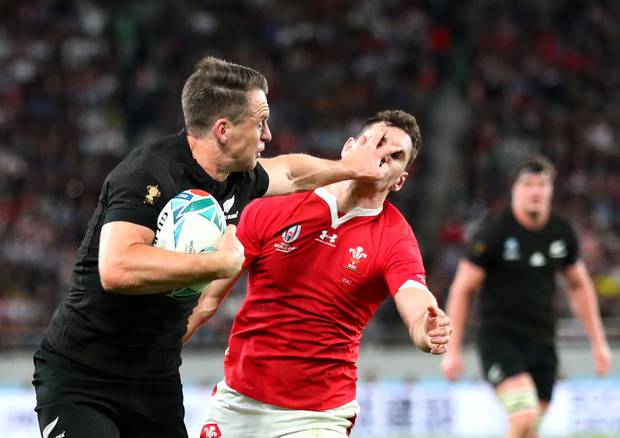 After one of their worst ever World Cup performances against a very good England six days earlier, all the All Blacks fronted, an attitude that allowed head coach Steve Hansen to leave on a high note, his opposite Warren Gatland, with whom he spoke at length before kick-off, returning to New Zealand without the win he craved.

It was evident from the kick-off that Wales wouldn't or couldn't provide the intensity that finalists England brought at Yokohama Stadium last weekend.

The All Blacks had an extra day to get over their disappointment, and Wales, who lost to South Africa in the infamous battle of the box kicks, were in trouble at 14-0 down as the All Blacks enjoyed the extra time and space – Joe Moody and Beauden Barrett initially taking advantage.

Gatland's men allowed the All Blacks too much quick ball, and with flanker Sam Cane seemingly on a one-man mission to prove Hansen was wrong to select Scott Barrett ahead of him for the England match, a bit of the fear factor crept into the Welsh, although to be fair to them they entered into the running spirit of this playoff for the booby prize. In fact, the energy shown by both sides was remarkable given the circumstances. 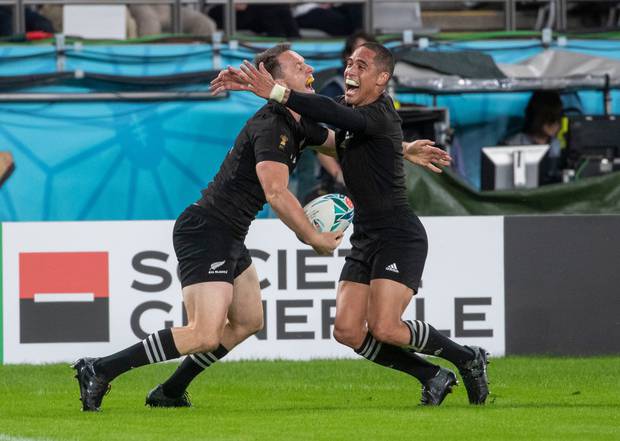 All Blacks wing Ben Smith is hugged by Aaron Smith after scoring his second try against Wales. Photo / Mark Mitchell

Speaking of those wanting to make a point (apart from Cane and Ben Smith), hooker Liam Coltman was a man inspired when replacing Dane Coles, who appeared to have a calf problem, after 25 minutes and Brad Weber again pressed his case.

Pretty impressive all-round from the All Blacks, who failed against England but who can't be considered failures after this.