Beauden Barrett celebrated his milestone test with two tries as the All Blacks notched a record-equalling victory over Wales in Cardiff to begin their European tour in style.

After a grind of a first half, the All Blacks popped the cork in the second spell to showcase some champagne rugby – Will Jordan and Sevu Reece claiming tries from the very top draw.

Barrett bagged two intercept tries - the first and last - to be named man of the match and savour the occasion of becoming the All Blacks' 11th test centurion. 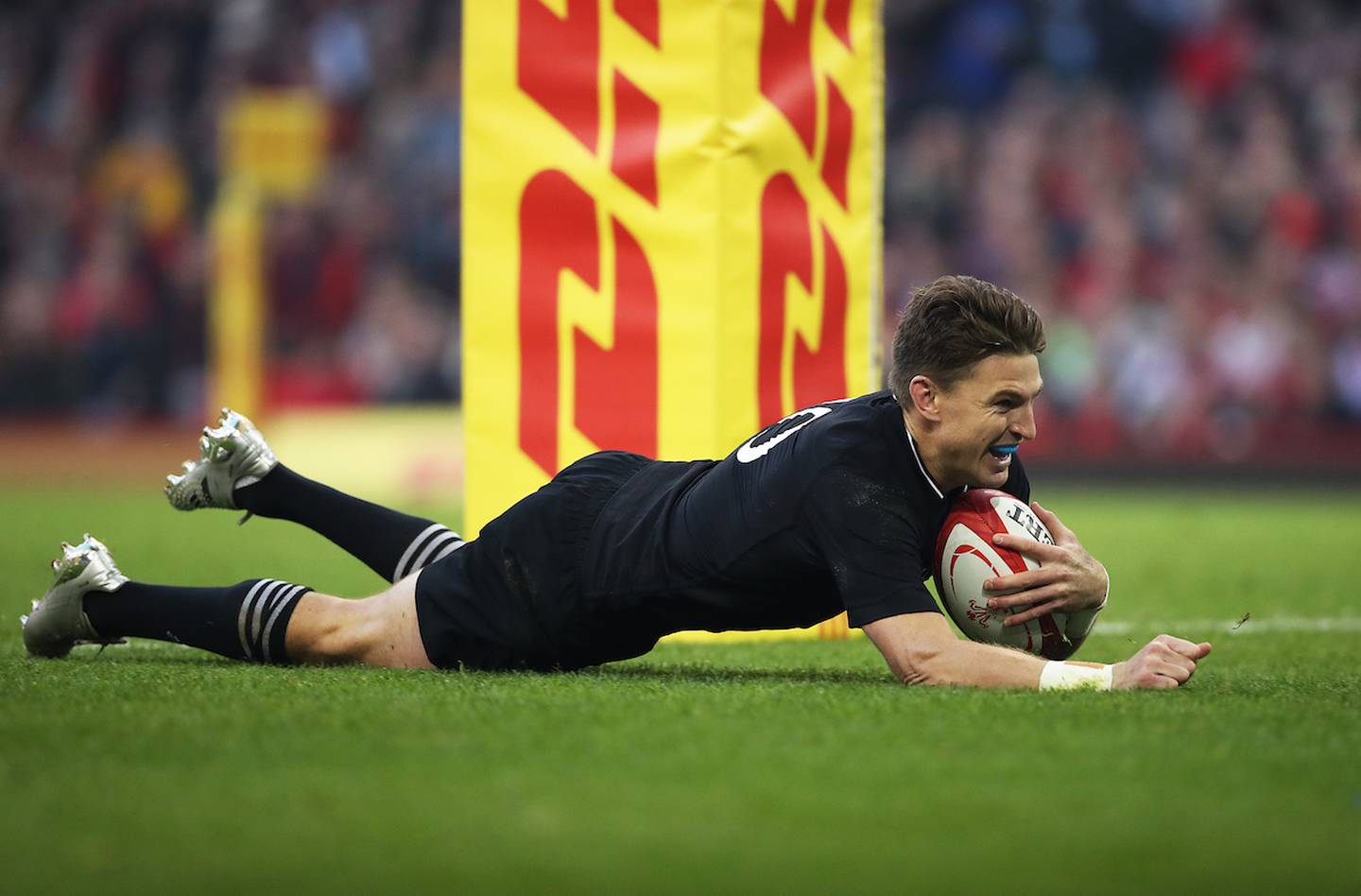 Beauden Barrett dives in a try after an intercept early in the game. Matt Impey/Photosport

Against a heavily weakened Welsh side, missing three English-based players and several more through injury, the All Blacks were in total control. They led 18-6 at halftime and after claiming seven tries – five in the second half – their 38-point winning margin matched the 2005 side for the largest against Wales in Cardiff.

This was a second half exhibition from the All Blacks, treating the 74,500 sell out crowd to superb, patient attacking rugby. Ardie Savea was the standout for All Blacks from No 8. He claimed turnovers and was a handful throughout with ball in hand but the All Blacks dominance truly came to the fore when they unleashed their bench.

Brad Weber, Sevu Reece, Samisoni Taukei'aho and Tupou Vaa'i all had a major impact in blowing the Welsh away in the final quarter. While Jordan claimed a stunning individual try, Reece's strike had the All Blacks embracing the Harlem Globetrotters with the interchanging of passes between Savea, Rieko Ioane and the try-scorer.

Wales closed within 12 points early in the second half through their only try to second five-eighth Johnny Williams but with a long list of absentees, it was almost as though they talked themselves out of the contest before the match began. Their losing run against All Blacks dating back to 1953 and now spanning 32 successive tests, including 17 defeats in Cardiff, continues.

While the All Blacks were always expected to win and win well, their dominant finish sent a clear message to their European rivals.

Barrett savoured the dreamed start as he snaffled Gareth Anscombe's pass and cruised away to score in the fourth minute. Barrett was, however, possibly fortunate not to concede a yellow card not long after for another attempted intercept.

Wales, having watched the Springboks find success with their high ball assault during the Rugby Championship, adopted similar tactics to frequently pepper the All Blacks back field.

Already without three leading English-based players with this test falling outside the official window, and reeling from a host of injuries, Wales suffered another early blow to lose captain Alun Wyn Jones, in his record-breaking test, to a shoulder injury after a collision with Jordie Barrett. 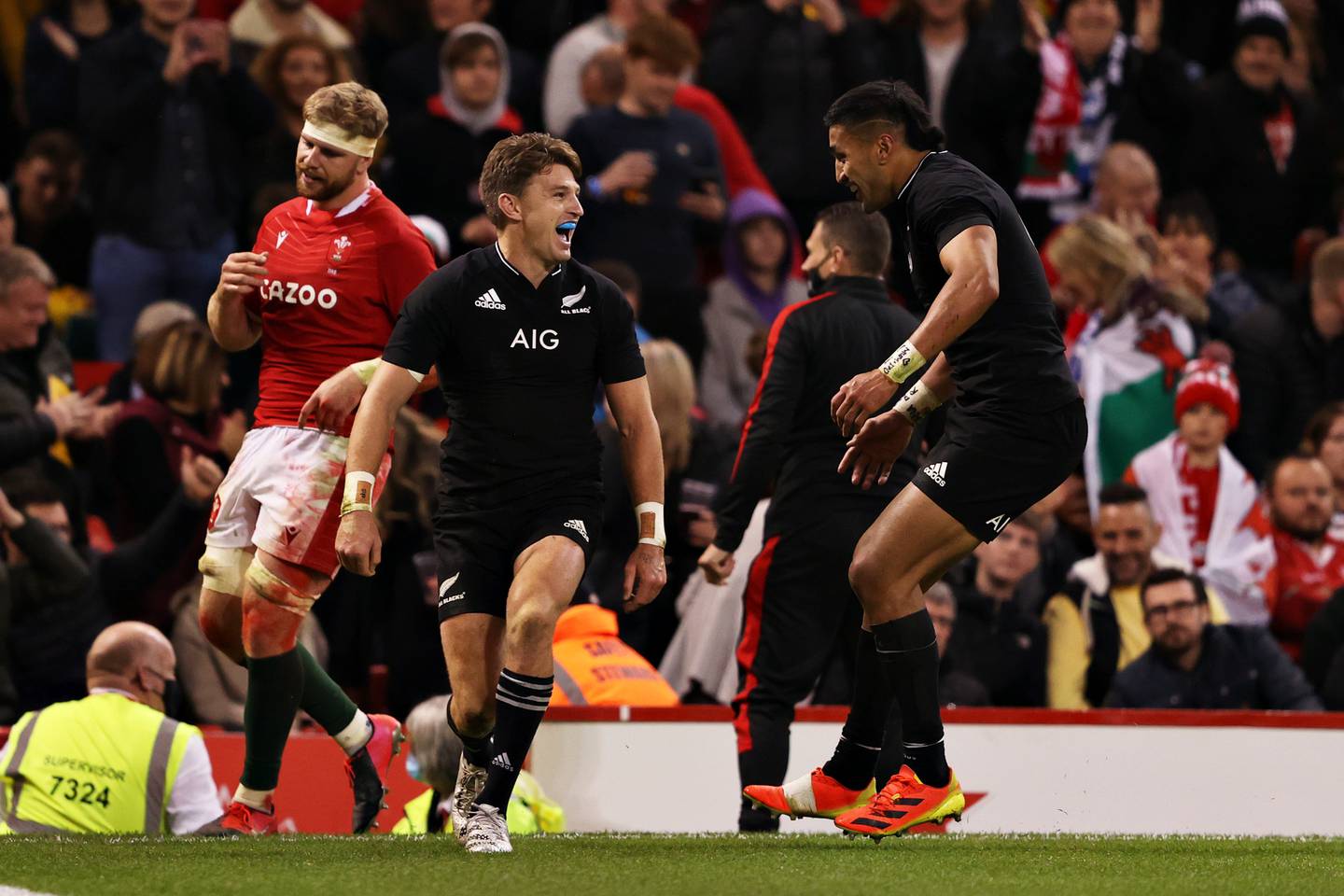 Like the Boks, Wales employed rush defence on the All Blacks midfield which made getting the ball to the edges difficult at times. The All Blacks emulated these tactics with Anton Lienert-Brown and others flying out of the line to make big spot tackles.

With Wales applying pressure wider out and rookie openside Taine Basham contesting the breakdown to slow possession the All Blacks pack took the direct route with success.

Savea stood out in this regard to carry multiple times in the same passages, bump off defenders and make metres with leg drive - this combining with a slick offload to set up TJ Perenara's try. 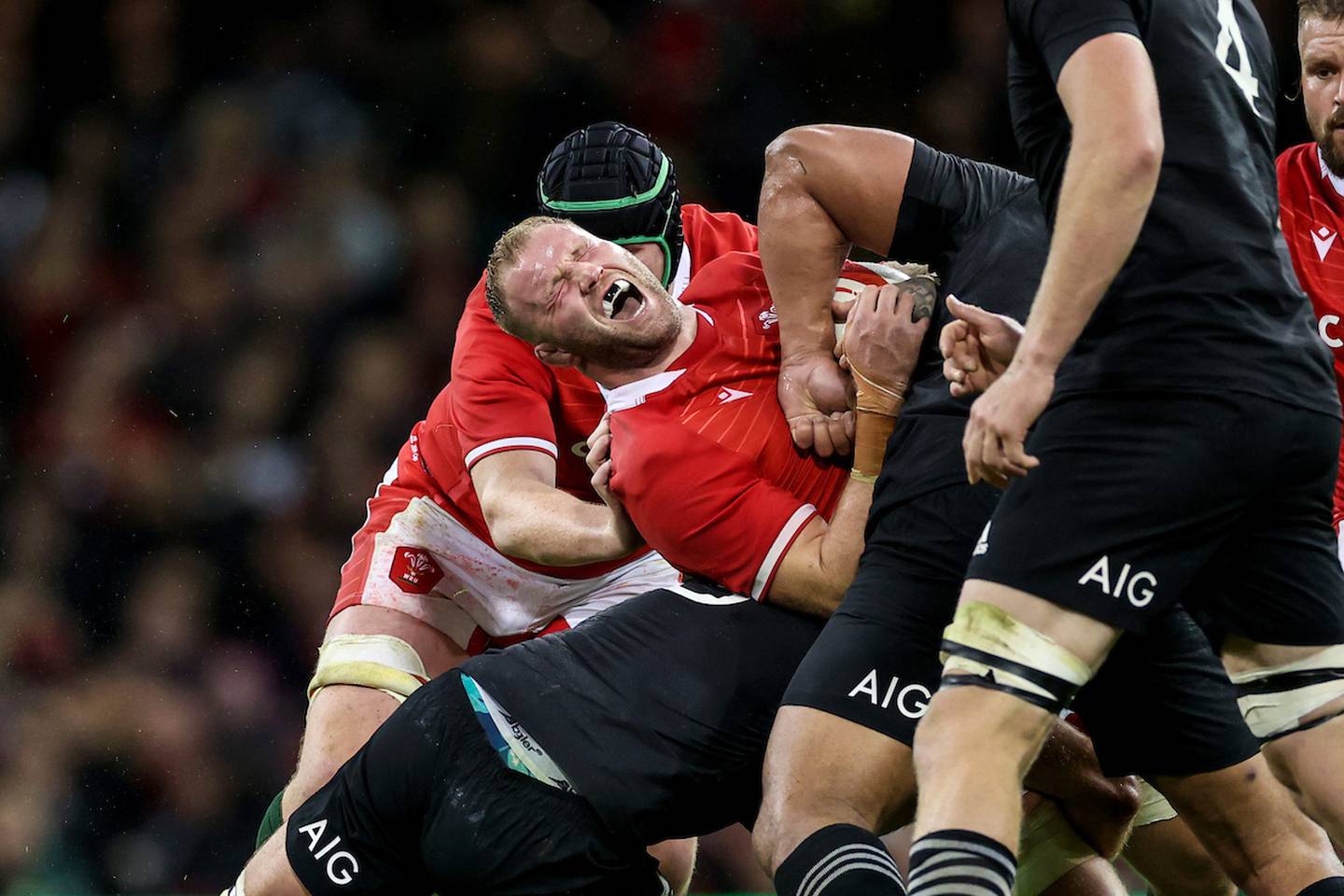 Nepo Laulala was given a yellow card for a tackle on Ross Moriarty of Wales. Matt Impey/Photosport

Nepo Laulala copped a harsh yellow card just before the break with French referee Mathieu Raynal appearing to be talked into a card after Ross Morarity led with, and ducked his head into contact. Laulala was ruled to not have used his arms, reducing the All Blacks to 14 men for the start of the second half, and Morarity left the field to further deplete Wales.

Laulala's temporary absence didn't hurt the All Blacks, however, with both teams claiming three points.

The Welsh kicking tactics began to backfire in the second half as Ioane and Jordan launched counter attacks. Ioane made one bust but Jordan was not to be outdone, claiming a superb solo strike after gliding to the outside and chipping the last man to score his 16th try in his 11th test.

From there, the All Blacks bench lifted the pace and tempo, with Wales unable to stick with the visitors. Wales coach Wayne Pivac admitted as much post match, saying his side "fell off a cliff".

With Wales put to bed the All Blacks move on to Italy in Rome where Ian Foster will embrace the chance to rotate his squad before headline tests against Ireland and France to finish the season.

The only concern for the All Blacks will be a shoulder injury to Brodie Retallick.