According to Niwa's just-issued summary for the month, temperatures during the first month of autumn were at record highs in many places.

The month – which came in at 1.89C above average – goes down as the second-equal hottest on record, tying with March 1999 and just behind March 1968.

Further, Niwa reported today, first three months of this year had been the fourth warmest start to the year since records began in 1909.

The balmy temperatures were consistent with a warming climate and, when seen in context with other warm months, a clear trend was evident, Niwa's principal climate scientist Dr Brett Mullan said.

Niwa climatologists used averages spanning a 30-year period from 1981 to 2010 as the basis of their calculations.

Further, New Zealand hadn't experienced a nationwide monthly mean temperature that was below average in 26 months - or since January 2017.

"The increasing frequency of warm months versus cold months is clear evidence of a warming climate," Mullan said.

"Greenhouse gas increases are the driving factor behind the progressive warming for New Zealand and the globe.

"We can expect high temperature records to be broken with increasing frequency over the coming years."

From Cape Reinga to the bottom of the South Island, record mean air temperatures were reached last month.

March was also a dry month for many locations, although extremely heavy rainfall occurred in the western South Island between March 25 and 27.

That was down to an "atmospheric river" extending from Australian cyclones, coupled with extra energy from the Tasman Sea marine heatwave, as well as a strong low-pressure system siphoning moisture toward New Zealand.

The highest temperature of the month was 32.4C at Waipara on March 5.

Also of note was Ranfurly with a mean maximum temperature during March of 23.4C, which was 4C warmer than average and the highest since records began there in 1897.

Warmer than average sea surface temperatures persisted throughout March and marine heatwave conditions continued in the Tasman Sea and in parts of New Zealand's coastal waters. 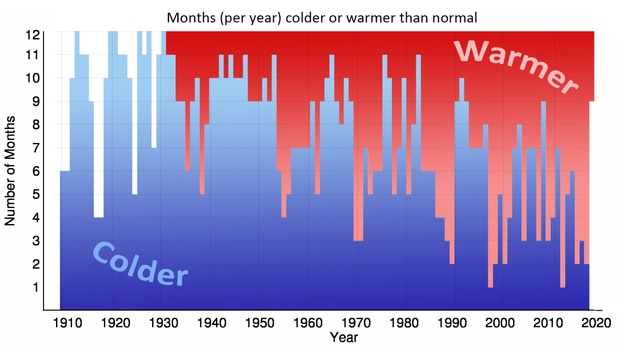 Meanwhile, Australia just experienced its hottest March on record, and its hottest first quarter of the year ever recorded.

Looking ahead, Niwa has picked above-average temperatures that have persisted past summer to hang around over much of the country, and right into the first month of winter.

It also warned of the potential for more big downpours over the next three months around in the west and north of the South Island, which was only just hit by a record deluge.

March at a glance

SOIL MOISTURE: As of April 1, drier than normal soils were present across the majority of the North Island and a large portion of the South Island. Conversely, soil moisture levels were slightly higher than normal in northern Marlborough and Tasman, along with the West Coast, and parts of Otago. Meteorological drought conditions were present in Western Bay of Plenty as of March 30.