A massive patch of water off the eastern coast of New Zealand is likely boasting the warmest temperatures on the planet at the moment, an expert says.

An image from the Climate Reanalyzer website shows a massive "blob" of water - likely bigger than the land mass of New Zealand itself - in the Pacific Ocean to the east of New Zealand at the moment.

The patch has slowly been getting bigger this month, but Professor James Renwick, a weather and climate researcher at Victoria University, says it's nothing out of the ordinary and likely occurs in waters with little wind at times.

"Temperatures, depending which of those sites you look at, but the waters out of eastern New Zealand are pretty warm that's for sure.

"Sea temperatures don't actually vary too much and a degree, plus or minus, is quite a big deal and this area is probably four degrees or more than that above average and that's pretty huge.

Right in the centre of the "blob" it's likely to be more than six degrees warmer than average, he said.

"It's extremely warm water in terms of differences from average, it's got to be one of the warmest spots on the planet at the moment."

The image, taken on Monday, comes after the Herald reported earlier this month that scientists weren't ruling out another marine heatwave which will further melt glaciers over summer.

Throughout November, some sea temperatures grew up to 10 degrees in a matter of weeks while land temperature records were also breaking.

"A stormier start to December has meant coastal waters have had a lot more mixing and sea temperatures actually dropped slightly for a while - but are on the rise again for many parts of the country," said Niwa meteorologist Nava Fedaeff, adding that there might be another slight dip in the week ahead.

In September this year, it proved the first time in more than 30 months that seas were cooler than normal. 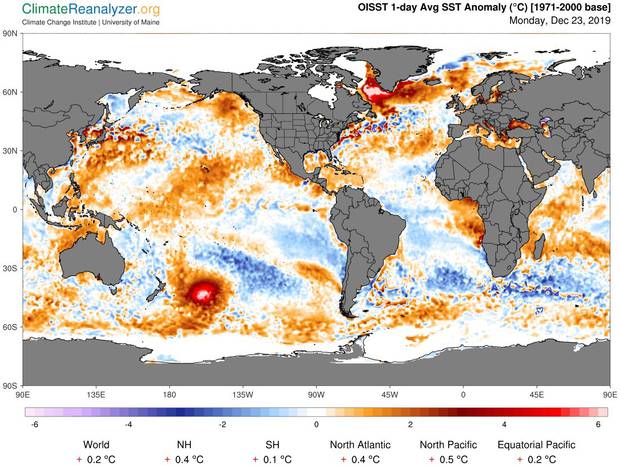 The patch, or blob, of hot water is a bit too far off the New Zealand coast for Kiwis to feel its benefits, but it is "extremely warm", experts say. Image / ClimateReanalyzer.org

But by October, sea surface temperatures were back to near average; a month later, they were returning towards "above average".

She couldn't discount the chance of another marine heatwave – which would make it the third in three years.

Professor Renwick today said the waters out to the east of the country had been experiencing "quite high pressures, sunny skies, light winds, so the surface of the ocean would warm up quite quickly".

"But if the winds are strong then it gets all stirred up.

"If it's not being stirred enough, the warming from the sun and so on will just be absorbed at the surface of the ocean where you get this quite thin layer of very warm water, so what I'm wondering is, how deep is this very warm blob?"

He said it was likely a shallow layer of warm water on the surface that would likely fade and then dissipate.

"I wouldn't call it a sign of global warming or anything like that, it's just what happens sometimes in the ocean. As far as I am aware it's just a patch of water that's had a lot of sunny skies and not much wind.

"Five or six degrees is quite unusual and I don't have an explanation for it."

Unfortunately for Kiwis, the hot blob is heading from New Zealand, towards South America, the way the currents move and winds tend to blow.

"The westerly winds blow around the whole southern hemisphere pretty much all the time so they blow from west to east and the water underneath tends to move in the same direction."