The Department of Conservation is mounting a fresh security sweep of its offices and sites amid sinister threats to attack its staff, slash vehicle tyres and shoot down helicopters.

More than 20 serious threats and incidents – most involving social media posts over DoC's use of 1080 poison to protect our native wildlife – have been recorded this year alone.

Among more than 260 others logged in the last two and half years were menacing messages about bombing vehicles, blocking roads, burning buildings, poisoning water supplies and targeting staff, contractors and ministers with violence.

Figures released to the Herald under the Official Information Act showed 164 incidents were recorded in 2020 – double that of the year before.

Nearly all related to DoC's operations to either control Himalayan tahr, or to deploy 1080 poison to shield species like mohua, rock wren and orange-fronted parakeets/kākāriki karaka against stoats, possums and rats.

The records included eight direct assaults against staff in the last two and a half years – although none were specifically related to tahr or 1080 operations.

In one of the 22 cases so far this year, however, one 1080 opponent made a threat in person to shoot a staff member and slash the tyres of a DoC vehicle. 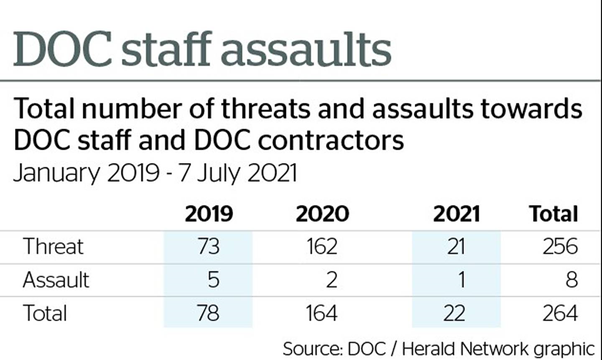 A breakdown of the data by location showed the Central North Island had seen the most threats and assaults (23) since 2019, followed by Hauraki, Waikato and Taranaki (21) and the western South Island (19).

Escalating danger to DoC staff has reached the point where workers have sometimes been followed and filmed, and has prompted the Government to spend millions of dollars to set up a permanent security team and beefing up protection at DoC sites.

A ranger who earlier spoke to the Herald said he'd resorted to sleeping with a gun under his bed to protect his family, and blamed social media for giving a potent platform to anti-1080 hostility.

Conservationists have condemned the behaviour, pointing out that the extra cash for protecting staff otherwise could have gone directly toward biodiversity.

"It's not okay that DoC staff are threatened going about their already difficult jobs of saving New Zealand's native species from extinction," Forest and Bird's Debs Martin said.

"Threats and actual violence ... are frequently whipped up by individuals on social media to try to protect their own interests, and has nothing to do with helping our environment or the rights of other people."

DOC's chief security officer, Michael McCarthy, said the department took a "zero-tolerance approach" to any threats, abuse and harassment directed toward staff and others.

While it wasn't the sole cause, opposition to DOC's landscape-scale pest control programme – of which 1080 poison drops formed a part – accounted for a "significant proportion" of these incidents, he said.

The provided records showed opposition to 1080 had been behind 61 threats in 2019, 113 in 2020, and 14 so far this year, compared with 33 incidents related to DOC's tahr operations in the South Island last year. 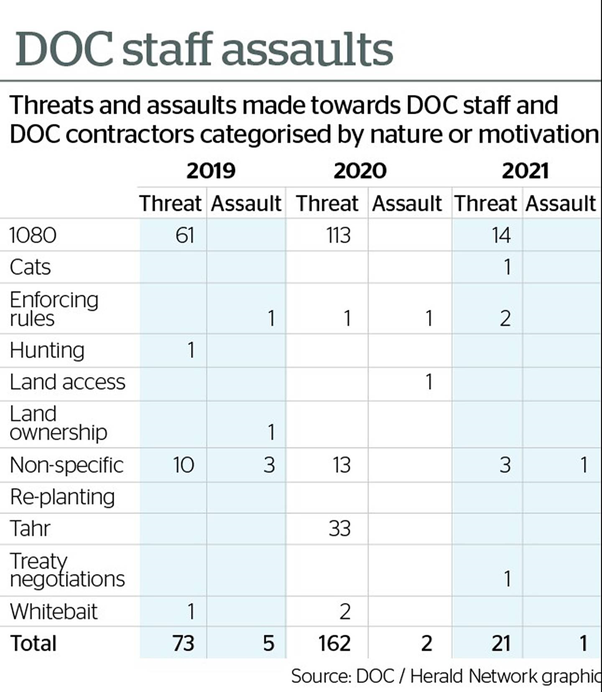 "The threats, abuse or harassment made to DoC staff have occurred in the field, in DoC buildings and facilities, on the telephone, in emails and letters and online through social media," McCarthy said.

"While not all the incidents are direct threats, the nature and duration of the harassment has a cumulative effect on staff wellbeing."

DoC's newly-formed security team was now carrying out a review of protective security across the conservation estate, with sites like offices, visitor centres, workshops and field bases prioritised for upgrades.

"The landscape scale pest control programme continues to draw attention from groups, some of which threaten the safety and security of staff and contractors working in the field."

This work was being carried out as DoC faced the possibility of another beech mast seeding event in parts of the country next summer – something that would again require a massive operation to combat the pest plague it spurred.