A Waikato-based scientist has helped uncover startling features of a deadly, 85m-high tsunami that hit Indonesia two years ago – with some striking lessons for New Zealand's own risk.

On December 22, 2018, an eruption of the Anak Krakatau volcano caused a 300m high flank of the volcanic cone to collapse into Indonesia's Sunda Strait.

That triggered a tsunami that swept into the surrounding coastal region, killing at least 426 people and injuring more than 14,000.

Anak – Indonesian for "child"- Krakatau is the cone that grew out of an underwater caldera caused by the cataclysmic eruption of Krakatau in August 1883, which killed more than 36,000 people, mostly from the resulting tsunamis.

Gradually rising from the seabed, the new volcano emerged above the ocean surface about 1927. By the time of the 2018 eruption, it stood some 300m tall. 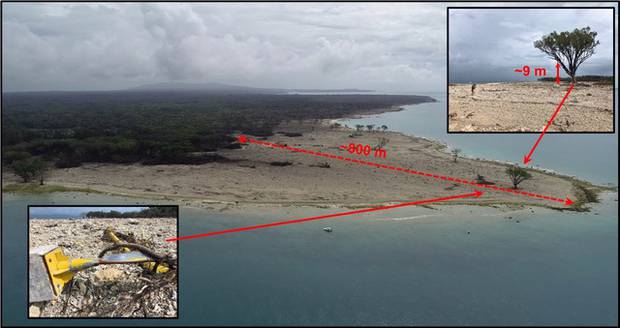 This image shows the tsunami's run-up depth at the northern tip of Ujung Kulon island, along with a lone-surviving tree and the twisted remains of a steel navigation light. Photo / Jose Borrero

The deadly tsunami that came with it was caused by around 250 million cubic metres of material being displaced into the sea.

After the disaster Dr Jose Borrero, of Raglan-based marine consultancy eCoast Ltd, travelled to the area with a group of international scientists, funded by the United States National Science Foundation, to get a clearer picture of what happened.

Their findings, reported in a just-published study, revealed the tsunami reached more than 100m high near the point that it started.

At two small islands nearby, the team made measurements at several locations that found its run-up height – or its height above sea level when it arrived on shore – was 85m, or about 13m higher than New Zealand's Beehive.

"These were steep sloped, heavily vegetated islands where all of the trees and vegetation had been stripped off down to bare dirt up to heights of more 80m above sea level," Borrero said.

Borrero said the landslide-generated wave was "highly directional", with most of the energy pushed out to the southwest towards open ocean.

"The waves that hit the populated areas of Java were the smaller waves off the backside of the tsunami source."

At two particular points - Paniatan Island, a spot famous for surfing, and Ujung Kulon, a national park at the western tip of Java, the tsunami's height was much taller than it was where it hit populated areas.

"These places were located in the direct 'line of fire' from the tsunami wave, and got hit with a 10 to 15m high wall of water that stripped all of the jungle vegetation off the coral bed rock to a distance of 800m inland."

Borrero said these insights weren't just eye-opening – but were relevant to New Zealand.

"The takeaways are that volcanic tsunami hazards can't be ignored," he said, adding that Whakaari/White Island was one potential threat.

"I am not saying that Whakaari has any similarities to Krakatau other than some superficial geometry - they are about the same size and Whakaari is 50km offshore of Whakatane - but these eruptions can occur without much warning, and we really don't know what Whakaari is capable of in terms of eruption potential." This dead forest on Panjang Island, to the north east of the Anak Krakatau volcano, shows some of the impact left by the tsunami. Photo / Jose Borrero

Just as relevant was the risk posed by under-water landslides.

Work he'd carried out in Papua New Guinea in 1998 showed that submarine landslides triggered by relatively small earthquakes can generate large tsunamis with devastating effects on nearby coastlines.

Over recent years, scientists have been investigating the tsunami potential of a sudden landslide in the 2000m-deep Kaikoura Canyon, which comes within 500m of the coast. In a worst-case scenario here, people would just have minutes to evacuate.

"Most of New Zealand's tsunami planning is based on earthquake-generated tsunami, which we understand a lot better than landslide generated," Borrero said.

"Landslide-generated tsunami are much less frequent and do not follow any well-established rules as far as their frequency of occurrence or their size when they do.

"Also, the way they generate tsunami waves is not at all straight-forward - so there is even more uncertainty in the size of the wave that might happen from otherwise identical landslides."

"We need to keep the people aware and educated on these possibilities because for these extreme near-field events, there will not be any time for a warning and people need to know the natural warning signs in order to have a chance."