For the first time in 60 years of human spaceflight, a rocket has blasted into orbit with no professional astronauts on board, only four tourists.

Elon Musk's SpaceX's first private flight is led by a 38-year-old entrepreneur Jared Isaacman who's bankrolling the entire trip. He's taking two sweepstakes winners with him on the three-day, round-the-world trip, along with a health care worker who survived childhood cancer.

They'll ride alone in a fully automated Dragon capsule, the same kind that SpaceX uses to send astronauts to and from the International Space Station for NASA. But the chartered flight won't be going there.

A successful launch into orbit for the Inspiration4 crew. Photo / SpaceX

The flight launched Wednesday night (noon Thursday NZT) from Kennedy Space Center, with the two men and two women soaring 160km higher than the space station, aiming for an altitude of 575km, just above the current position of the Hubble Space Telescope.

As the private flight's benefactor Isaacman sees it: "This is the first step toward a world where everyday people can go and venture among the stars."

A look at the spaceflight, dubbed Inspiration4:

Isaacman's idea of fun is flying fighter jets and keeping up with the Air Force Thunderbirds. He quit high school and started his own payment-processing company, Shift4 Payments in Allentown, Pennsylvania. He segued into aviation, founding Draken International for tactical aircraft training.

While he won't divulge what he's paying for the flight, Isaacman acknowledges the "worthwhile debates" over whether the wealthy should spend their fortunes fixing problems on Earth, versus sightseeing in space. But he contends investing in space now will lower costs in the future. 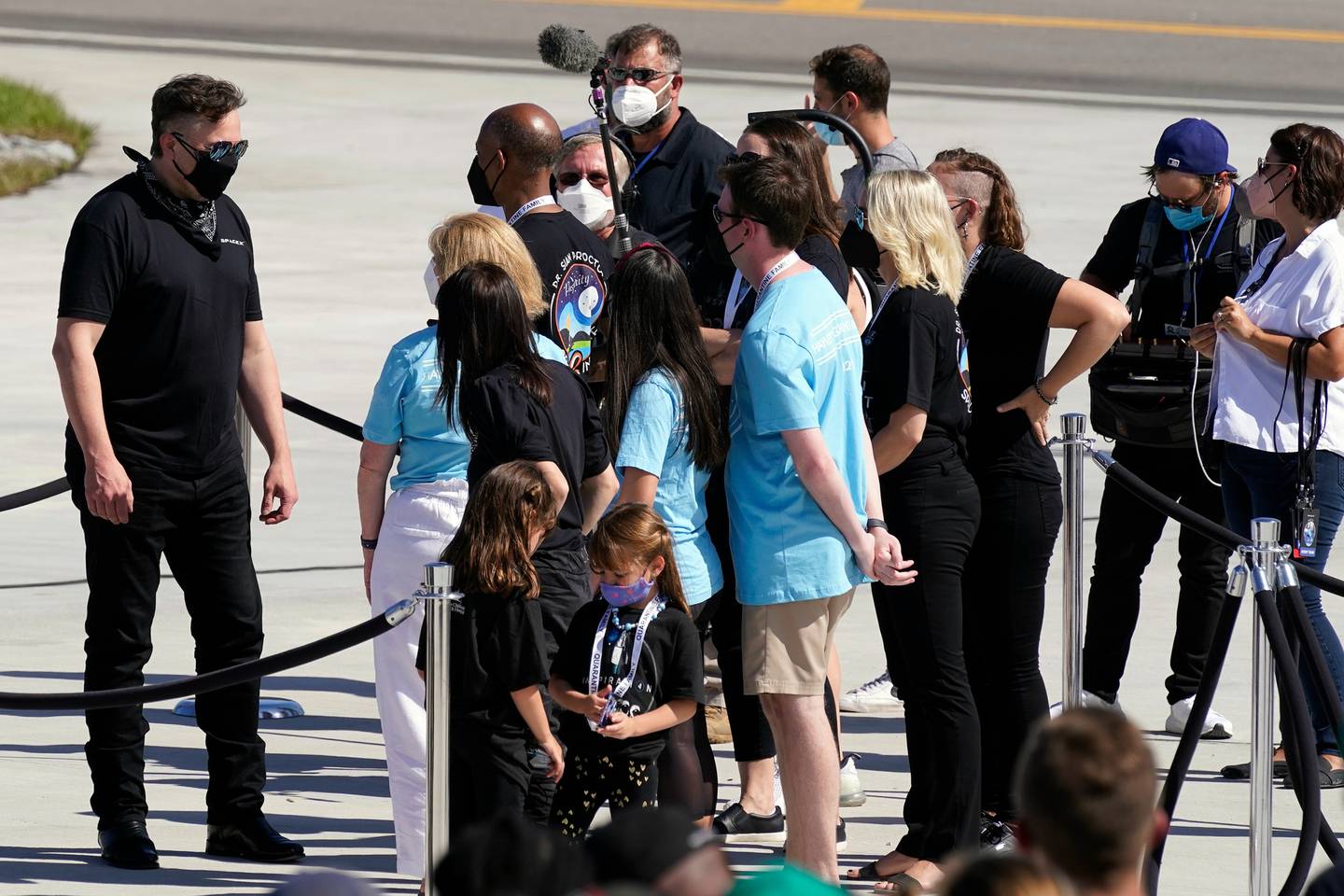 "Because it's so expensive, space has been the exclusive domain of world superpowers and the elite that they select," he told The Associated Press last week. "It just shouldn't stay that way."

When he announced the flight in February, he pledged US$100 million ($140m) to St. Jude Children's Research Hospital and aims to raise another US$100 million in donations.

Luck of the draw

Isaacman offered one of the four capsule seats to St. Jude, which offered it to physician assistant Hayley Arceneaux, a former patient who now works at the Memphis, Tennessee, hospital.

Now 29, Arceneaux was 10 when diagnosed with bone cancer, and had much of her left thigh bone replaced with a titanium rod. She'll be the first person in space with a prosthesis, proud to pave the way for "those who aren't physically perfect." 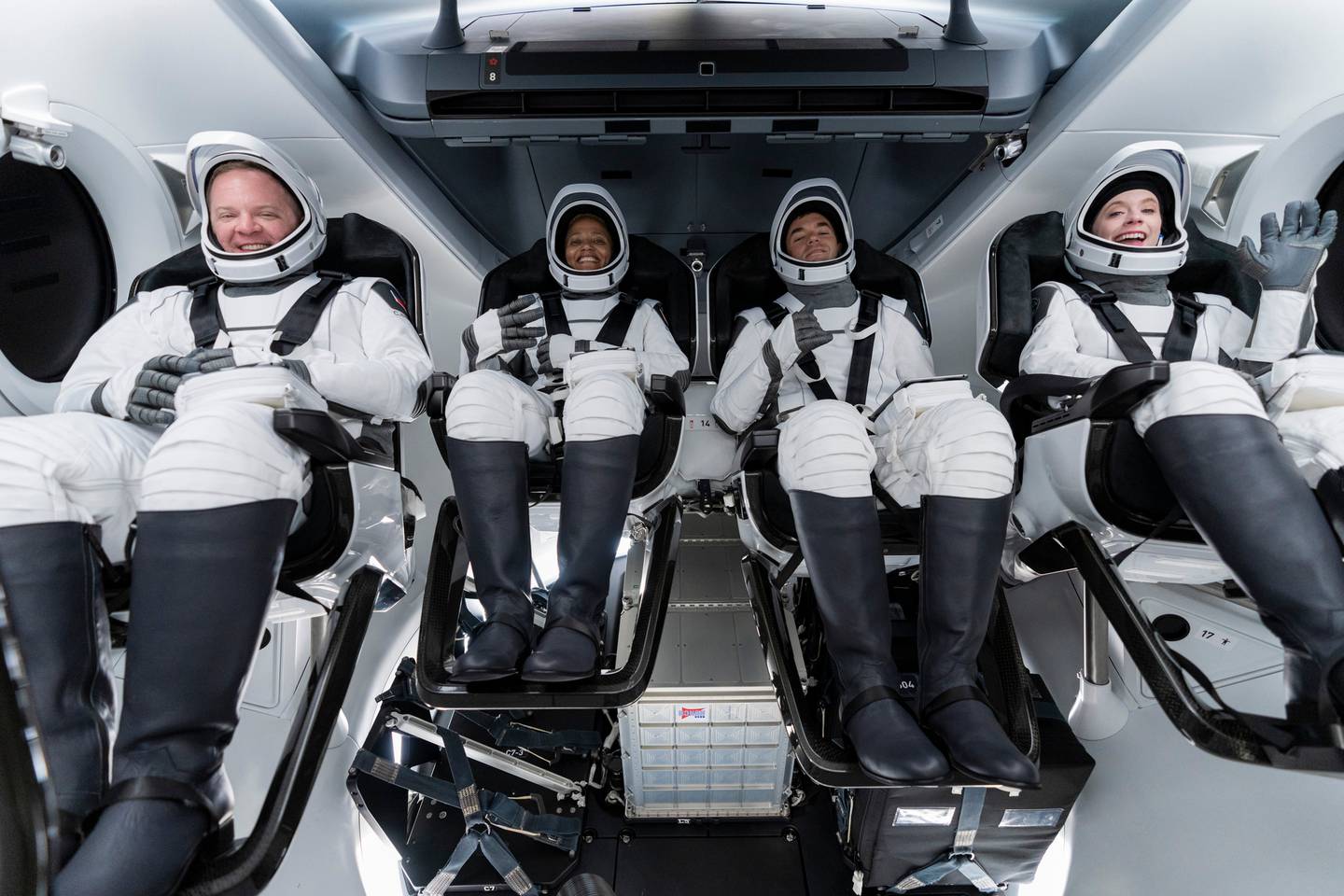 She'll also be the youngest American in space, beating the late Sally Ride, who became the first American woman in space in 1983 at age 32.

Sian Proctor, 51, a community college educator in Tempe, Arizona, and former geology instructor, beat out 200 other Shift4 Payments clients with her space-themed artwork business. Also a pilot, she was a NASA astronaut finalist more than a decade ago.

Chris Sembroski, 42, a data engineer and former Air Force missileman from Everett, Washington, entered an open lottery by donating to St. Jude. He didn't win, but a friend from his college days did and gave him the slot.

It's been a whirlwind since all four came together in March. They hiked up Washington's Mount Rainier in the snow, sampled brief bursts of weightlessness aboard modified aircraft and took intense, rapid spins in fighter jets and centrifuges.

"I know that my prosthesis can now handle 8 G's of force," Arceneaux told the AP. Her only compromise: SpaceX had to adjust her capsule seat to relieve pain in that knee.

Although the capsule is fully automated, the four spent time in the SpaceX capsule simulator rehearsing launch, reentry and other critical operations. 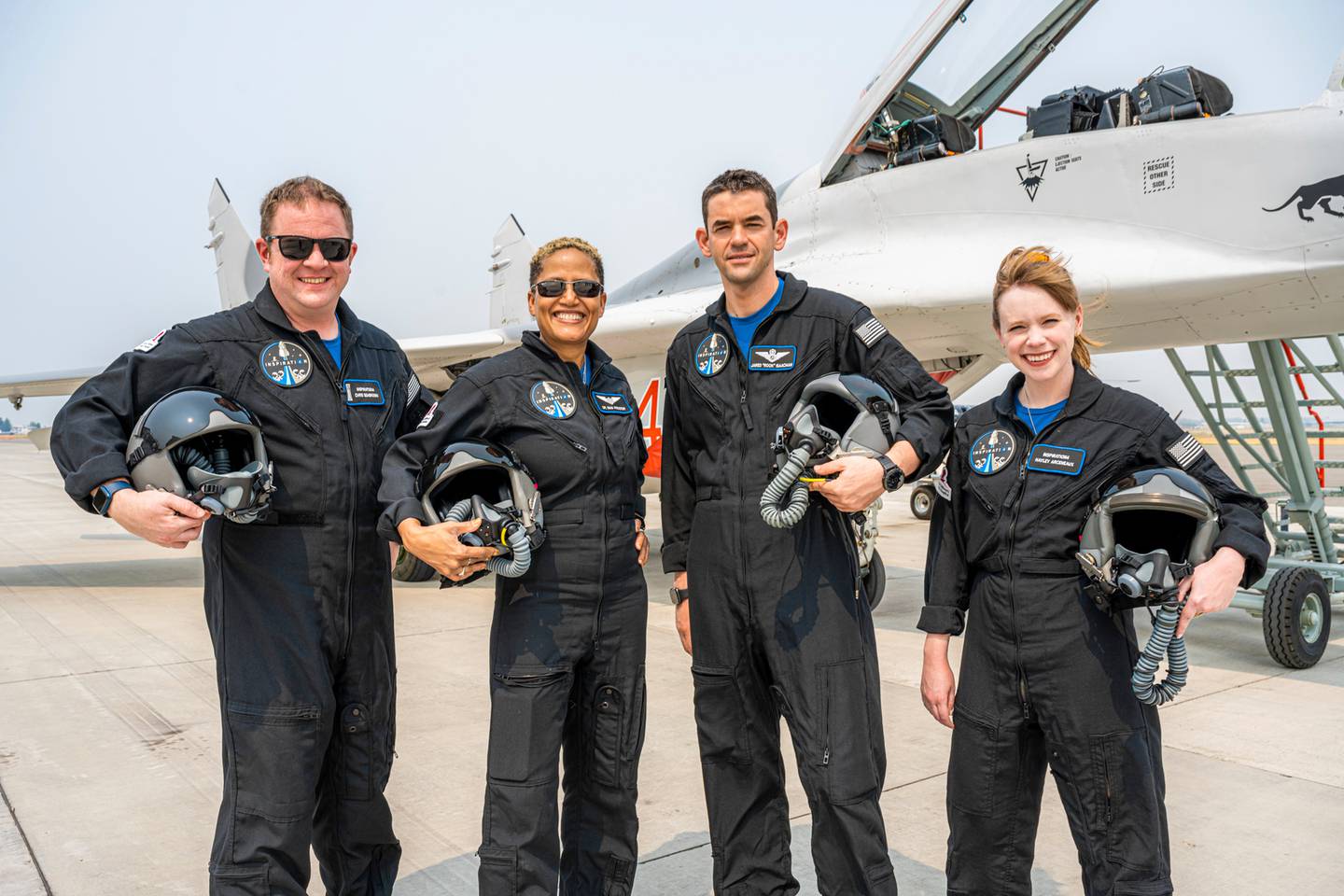 "We definitely had some Apollo 13-like simulation rides home where virtually everything was broken, and everybody made it back. So I think we passed all the tests," Isaacson said.

While acknowledging the risks, the four are impressed with SpaceX's focus on safety and reusability.

But Sembroski said his wife, a schoolteacher, will hold off celebrating until splashdown.

This is SpaceX's first private flight and the company is running the show - NASA isn't involved. So SpaceX is providing its own facilities for private passengers to sleep, eat and hang out before launch, and to get into their white-with-black-trim flight suits.

The leased launch pad used by SpaceX is the same one used by Apollo moonwalkers, shuttle astronauts and all three previous NASA crews. And at mission's end, they'll splash down off the Florida coast just like their predecessors.

Isaacman and SpaceX settled on three days as the sweet spot for orbiting the Earth. It gives him and his fellow passengers plenty of time to take in the views through a custom bubble-shaped window, take blood samples and conduct other medical research, and drum up interest for auction items to benefit the hospital. Hayley Arceneaux, Chris Sembroski, Jared Isaacman and Sian Proctor float during a zero gravity flight out of Las Vegas to get used to weightlessness. Photo / AP

While roomy for a capsule, the Dragon offers virtually no privacy; only a curtain shields the toilet. Unlike the space station and NASA's old shuttles, there is no galley or sleeping compartments, or even separate work areas.

Space tourism on the rise

Too busy to launch himself, SpaceX founder Elon Musk has two tourist flights to the space station coming up in the next year — the first as early as January — and also a private moonshot in the works.

The businessmen shelling out US$55 million ($77m) apiece to fly SpaceX to the space station won't be the first to pay their own way there.

Seven wealthy clients of Virginia-based Space Adventures rode Russian rockets to the space station from 2000 to 2009.

Isaacman travelled to Kazakhstan in 2008 to watch one of them soar: Richard Garriott, the video game-developing son of the late NASA astronaut Owen Garriott.

While once opposed to space tourism, NASA is rooting for these newcomers.

"I can't wait for them to fly and fly safely and fly often," said NASA's commercial spaceflight director, Phil McAlister.