Scientists are closely watching a silent, slow-burning earthquake off the east coast of the North Island - and sophisticated sensors only recently placed around the site are expected to reveal a wealth of exciting new insights.

What are called silent or "slow-slip" earthquakes can last from days to years, and can produce up to tens of centimetres of displacements along faults - sometimes without even being detected.

The latest event, which began off the coast of Porangahau last week, was unfolding in the same area as one that occurred shortly after the 7.8 Kaikoura Earthquake in November 2016.

Dr Laura Wallace of GNS Science said the quake had so far caused about 2cm of eastward displacement to three continuously-operating GNSS sites near the slow earthquake, which are operated by GeoNet.

"Past slow slip events in this area have involved movement on the plate boundary equivalent to that which occurs in magnitude 6.5 to 7.0 earthquakes, and this one looks like it is shaping up to be similar to previous slow slip events observed near Porangahau."

The quake was happening within the wider Hikurangi Subduction Zone - a largely offshore margin where the Pacific Plate dives – or subducts – westward beneath the North Island. 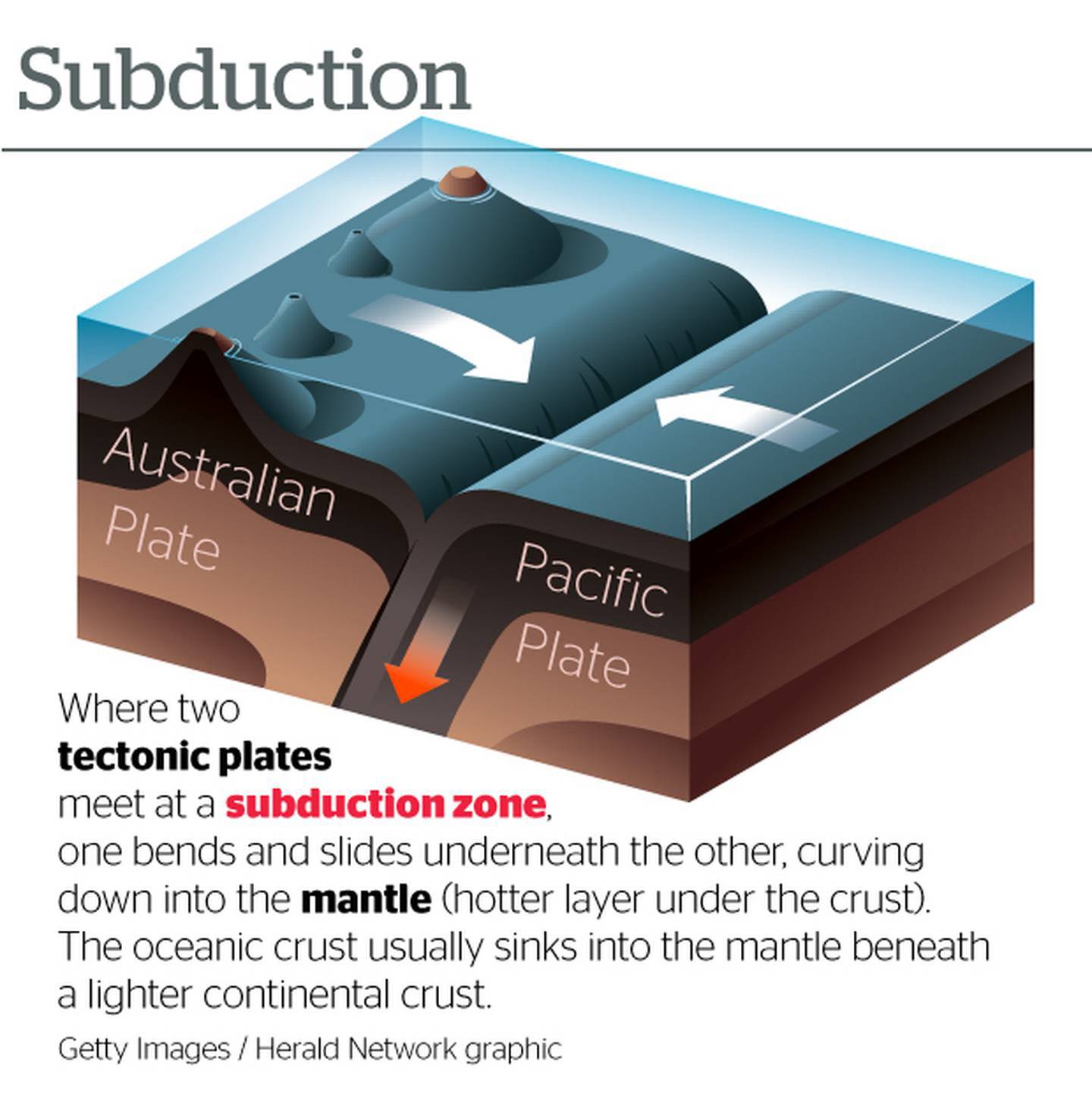 "The location of the current slow slip event offshore Porangahau is in the same place that we've seen slow slip events before, and they appear to occur in that area approximately every five years."

As it happened, the relatively regular timing of these events meant scientists were able to deploy an array of offshore sensors to catch the current one.

"We were expecting this slow slip event to happen sometime this year, and it has."

She said the data from the GeoNet GNSS and seismic network already offered an
"immediate picture" of what was happening.

"However, we are very fortunate for this event, as we have also deployed 26 sensors offshore the Porangahau area to detect earthquakes and vertical displacement of the seafloor during the slow slip event," she said.

"This is the first time that we have had offshore sensors in-place and recording during a Porangahau slow slip event, so it will be very exciting to see that data when we return to retrieve the instruments later this year.

"Our team also deployed several additional seismometers in the area a few months ago, to be able to detect small earthquakes that tend to occur during these slow slip events."

A team was also heading out to the area this week to deploy more instruments as part of a Marsden Fund-supported project.

It wasn't clear just how long the slow-motion quake might last.

"The slow slip events tend to be pretty short in the Porangahau area--based on past events there, it will probably only last for a week or two," Wallace said. 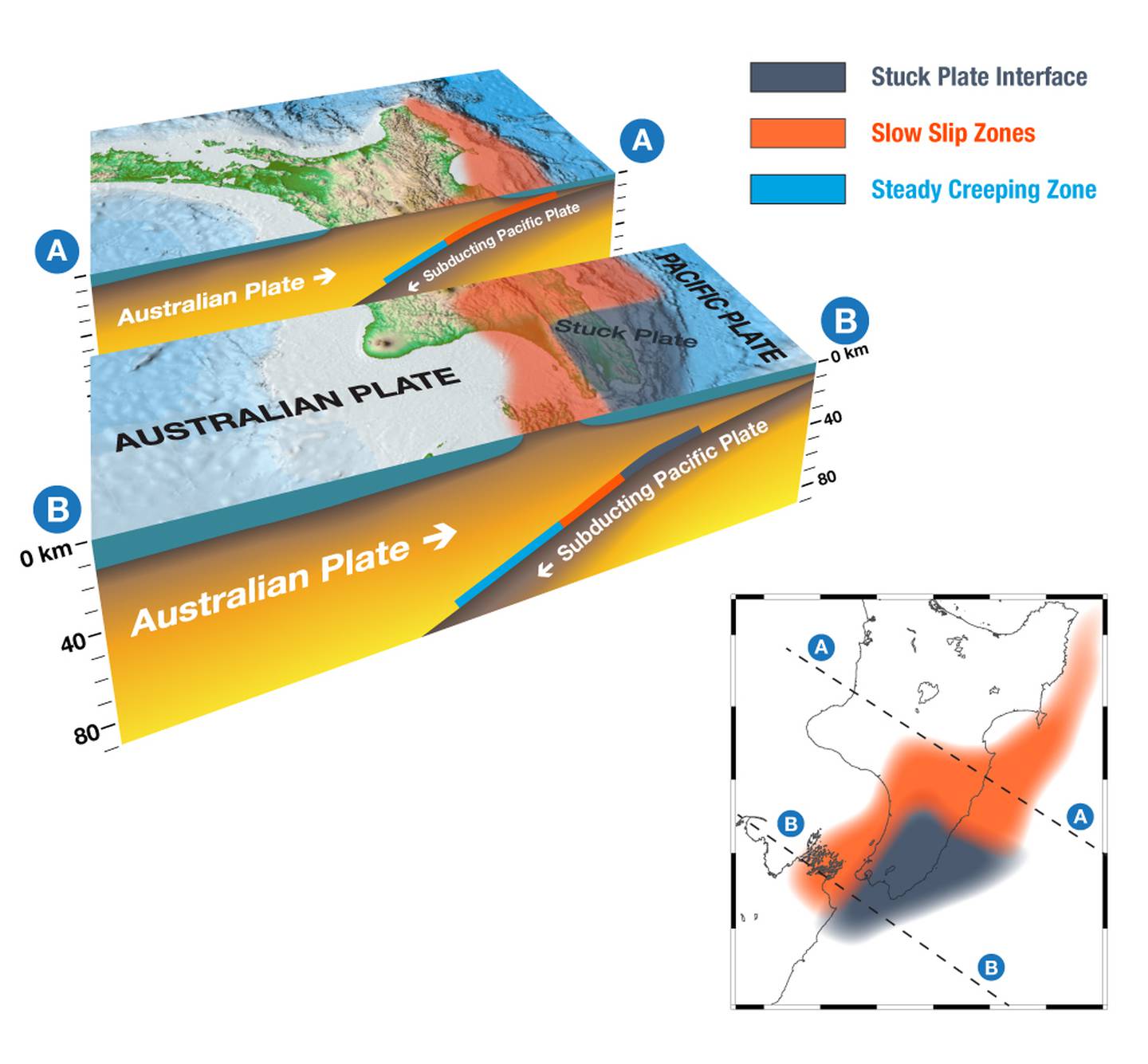 The slow-slip event is located in an area where the Hikurangi Subduction Zone is transitioning from being "stuck" beneath the southern North Island, to an area where the subduction zone is "creeping" further north, around Gisborne and Hawkes Bay. Image / GeoNet

The event also comes just as Wallace and colleagues published a new study shedding more light on subduction zones and slow-slip earthquakes, which were first detected only two decades ago.

The Hikurangi Subduction Zone was ideal for studying the mysterious quakes, because they occurred shallow enough to be imaged at high resolution using seismic techniques.

The new research combined supercomputers with seismic "CT scans" to test several theories, and enabled scientists to narrow their focus on the physical conditions in the fault where slow-slip events occurred.

While it didn't reveal exactly how these quakes work, it did point them to intriguing gaps in what'd been expected about their physical processes - and suggested other factors like cycles of fluid pressurisation and release could play a part.

The slow-slip quakes that occur regularly off Gisborne and Hawke's Bay tended to be very shallow - at depths of less than 15km.

That differed from the much deeper ones observed off the Manawatu and Kapiti regions, which usually unfolded at depths of 25km to 60km.

In New Zealand slow slip events, large areas of land have been observed to move eastward by up to 4cm over days, weeks, or months.

As there's been increasing evidence to suggest such movements can shift stress within the Earth's crust and in very rare cases trigger large earthquakes, scientists have been watching slow earthquakes around the world all the more closely.

Wallace believed that solving the mystery of slow-slip events will help us to better understand the potential of the Hikurangi subduction zone to produce major earthquakes.

Slow slip quakes have preceded some of the most devastating quakes recorded - including the 9.1 Tohuku earthquake in 2011, the 8.1 Iquique earthquake in Chile in 2014, and a 7.2 shake off the coast of Mexico the same year.

Earlier this month, researchers reported how the slowest earthquake ever recorded - lasting 32 years - eventually led to the catastrophic 1861 Sumatra earthquake in Indonesia.