The youth wing of the Act Party has made good on its promise of displaying drug paraphernalia at its orientation week stall at Victoria University.

But Act leader David Seymour – who visited the stall earlier today – says as the students were not breaking the law and thus Act would not strip them of their Act membership.

The stunt echoes similar moves from Young Act in 2008, where members of the Youth Wing were selling party pills for $1 each if the customer signed up to Act on Campus.

This was just two weeks before they were made illegal.

Photos have emerged of Young Act's O-week stall at the university which shows boxes of Shesha on display next to smoking devices – commonly used for consuming marijuana – and cannabis grinding devises.

None of these devices are illegal.

Act Party pamphlets and stickers are also on display, next to the paraphernalia.

The stall is manned by youth in Act Party t-shirts, standing in front of an Act banner.

The paraphernalia appears to be a stunt aimed at promoting Young Act's policy to legalise drugs such as MDMA, magic mushrooms and LSD.

The stall attracted a lot of attention today, it is understood. 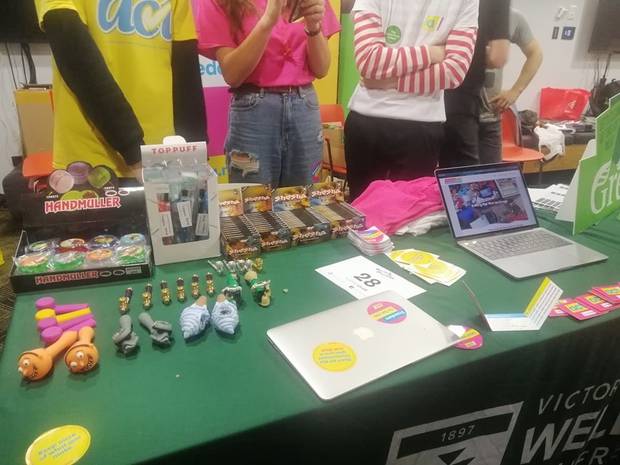 Photos of Young Act's O-week stall at the University show boxes of Shesha on display next to smoking devices - commonly used for consuming marijuana - and cannabis grinding devices.

At one point, Seymour even made an appearance.

Yesterday, Newshub reported that Young Act were planning the stunt and had not told Seymour about it.

Young ACT president Felix Poole said he does not consult Act on all its activities, including this stunt.

Although Seymour said he was happy the youth wing was pushing "edgy ideas," he told Newshub if the youth went too far he would "take away the name".

But speaking to the Herald, Seymour said the members of Young Act have not broken the law and will remain Act members.

"My advice to them is they should focus on issues affecting students such as the cost of living.

"But ultimately they're a student group separate from Act so if that's what they want to focus on, good luck to them."