New Zealand's acting Prime Minister Winston Peters has lashed out at Fraser Anning, labelling the rogue Australian politician a "jingoistic moron" as a humiliating censure vote looms in the Senate.

"I could call him a four-flushing, jingoistic moron, but you already know that in Australia," Peters told Sky News this morning.

"He is a national, absolute, democratic aberration. We all know why he's there. He's there by pure accident.

"It means you have to clean up your political system to avoid that sort of person making it into politics."

Peters' assertion that Anning got into parliament "by pure accident" is a reference to the fact that just 19 people voted for him at the 2016 election.

Anning had issued a statement within hours of the Christchurch attack — which targeted mosques and left 50 people dead — blaming it on Muslim immigration.

His comments were condemned across the political spectrum. A petition calling for Anning to be removed from parliament drew more than a million signatures.

However, the Senate does not have the power to expel him. Instead, the Coalition and Labor have drawn up a bipartisan motion censuring Anning, which will be introduced either today or tomorrow. 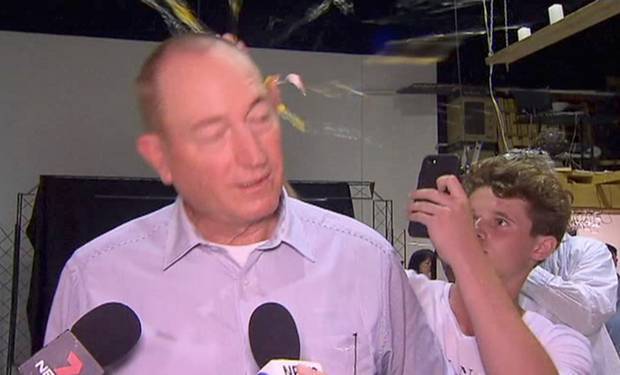 Anning was egged by a teenager after his controversial remarks about the Christchurch mosque shootings.

The Senator reacted to the egging by turning around and swinging at Connolly.

"He got a slap across the face, which is what his mother should have given him long ago, because he's been misbehaving badly," Anning said of the incident.

"When someone cracks you on the back of the head you react and defend yourself."