Winston Peters has identified who he thinks is the source of the leak of his superannuation details.

The Deputy Prime Minister spoke in the House during the general debate today and used the protection of Parliamentary privilege to name former National press secretary Rachel Morton as the alleged source.

Contacted by the Herald, Morton denied being the leaker.

Speaking in Parliament, Peters claimed the leak was an "Act-inspired hit job" and "dirty politics".

"The characters of my super leak view dirty politics as religion."

The claims made by Winston Peters about me today are categorically not true.

He said they have "been exposed for what they truly are".

Peters claimed the attack was orchestrated by the Act and National parties. 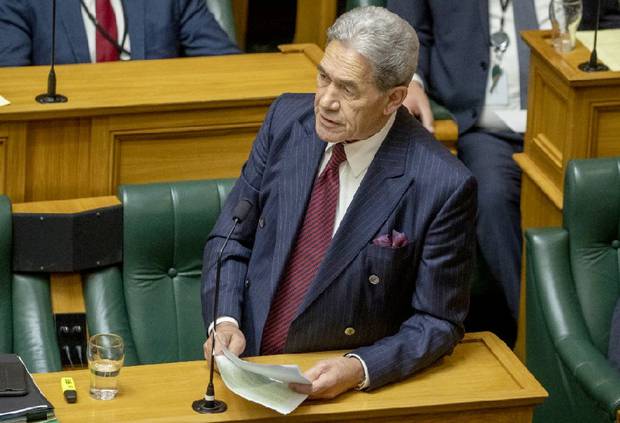 Winston Peters claimed the attack was orchestrated by the Act and National parties. Photo / Mark Mitchell

Peters claimed Morton heard about the details of his case because she was there when former minister Anne Tolley told Paula Bennett in a ministerial office.

Peters alleged the information was then passed to Newsroom editor Tim Murphy and blogger David Farrar.

Morton used to work for Newshub and NewstalkZB, said Peters.

"Newshub was doing its best to protect her after David Seymour tried to get the story leaked through channels connected with Morton. Three Newshub journalists … looked collectively stunned when they were told they had burnt Ms Morton as a source.

"They knew they'd been tumbled. When this was put to the Newshub reporters that it would also expose National and Jordan Williams' dealings with Tim Murphy, one of the Newshub journalists paused and said that National were 'distancing themselves' from the story.

"But it was an Act-inspired hit job to damage me politically in collaboration with a National Party staffer, Rachel Morton, who was the source of the leak and the source of Jordan Williams weaponising the information during the election campaign.

"Every last one of them - Morton, Seymour, Williams, Bishop, Murphy, Farrar - played dirty politics to breach my inalienable right, and the inalienable right of every New Zealander, to privacy.

"My source also revealed that National Party members joked amongst themselves about the leak but realised they couldn't do anything with the 'no surprises disclosure'. The risk was too high. That of course didn't prevent Ms Tolley from telling her sister, nor did it prevent 42 people from being made aware of my super case.

"All it took was for that private information to fall into the hands of David Seymour who craved media attention but couldn't claim the limelight. That would have placed a spotlight on Rachel Morton as his source - this is what dirty politics looks like.

"This is why I've brought this case on principle at huge cost - the principle of privacy.

"The collusion between the National Party, Act and these grubby figures in and around politics is what turns people off politics. The characters in this story of my super leak view dirty politics as their religion - it's the worship of jackals by jackasses.

"What I now know - and I didn't know as I went to court - is that my court case, during it, there were witnesses who gave evidence who knew he truth even as they were not speaking it and journalists - but not Barry Soper - who sat in the court who knew the truth but printed a tissue of lies. Shame on them but now they've been exposed for what they truly are."

Peters said this was "day one of the truth fight back" and Seymour was going to be in "my line". David Seymour sought the leave of the House to make a personal explanation immediately after Peters' speech, but leave wasn't granted. Photo / File

Act leader David Seymour was asked to leave the House for saying Peters lied. He was later asked back to withdraw and apologise which he did.

Seymour said there was a quid pro quo to standing in the House and using Parliamentary privilege and not to use it for personal reasons.

Speaking to reporters outside the House, Seymour said Peters was simply repeating “sleazy, baseless innuendo saying things that never happened” in the House.

“I categorically deny involvement in that leak – I had nothing to do with it.”

He said that Morton did not give him information and he did not pass on any information, as alleged by Peters in the House.

“The reason this accusation is being made is we’re in a personal relationship – he’s abusing that fact and I think that’s a new low for New Zealand politics.”

Seymour said Peters is struggling in the polls and is “finished and is now trying to drag other people down with him”.

“Winston Peters is a desperate man making it up and in this case, telling lies.”

He said he didn’t know anything about Peters superannuation payments until they hit headlines.

Seymour said the motivation was the story about Peters putting his friends on a taxpayer-funded trip to Antarctica.

National MP Chris Bishop spoke in the House and said that Peters' speech was essentially his valedictory, and was indicative of the rest of Peters' political career.

"Fabricating things, alleging things without foundation, and the classic is always this: will Mr Peters repeat those statements outside this chamber ... and mention all the names, my Dad, David Seymour and Rachel Morton?" Bishop told the debating chamber.

He said parliamentary privilege should not be used to deflect from real issues.

"We all know why it's happened - because of the Antarctica NZ story that broke this morning on RNZ. Forty years he's been doing this, and he'll continue to do this as long as he's in this Parliament."

Bishop said he hoped that New Zealand voters would see it for what it was and "cast NZ First into political oblivion". 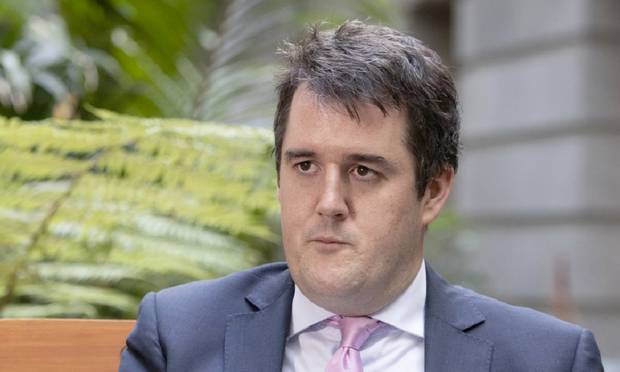 Chris Bishop said he hoped that New Zealand voters would see it for what it was and "cast NZ First into political oblivion". Photo / File

Outside of the debating chamber, Peters wouldn't repeat his allegations or name the people he had named in the chamber, saying he was taking the fight to the Court of Appeal.

Asked about the allegations he made in the House, under Parliamentary privilege, Peters would not repeat them on his way out on Parliament's black and white tiles.

"No no, you heard my general debate speech."

Asked what comes next, he said he would repeat what he said in the High Court when they issue proceedings.

He said he would be issuing proceedings "very soon – as soon as my lawyers are ready to go".

Peters said he would only repeat what he said in court.

"I've said what I've said, I'm off to the High Court on appeal and you will hear me repeat them there."

He said he was "very confident" we would win that appeal.

"I've had these battles before, when we have been overruled initially, but my case I'm resolved to see that the truth comes out, and the truth will be."

When again asked about what he said in the House, Peters told reporters "not to be repetitively stupid".

But he said there was "no chance" that the issue would go to court before the election.

"But I've resolved that the truth will come out."

The Serjeant-at-arms is looking for Seymour, asking security if they have seen him.

Peters was this week ordered by the High Court to pay nearly $320,000 in costs after his failed court action over details of his superannuation payments being leaked.

In a judgment by Justice Geoffrey Venning last Friday, and obtained by the Herald, costs of nearly $320,000 were awarded against the NZ First leader.

After a two-week hearing in Auckland last November, a High Court judgment in April ruled Peters' privacy was deliberately breached in the lead-up to the 2017 general election to publicly embarrass him and cause him harm.

But the 75-year-old's claim for damages and declarations against former government ministers Bennett and Tolley, State Services Commissioner Peter Hughes, the Ministry of Social Development (MSD) and its former chief executive Brendan Boyle was dismissed.

The new judgment orders Peters to pay Bennett and Tolley $101,897.26 - while a total of $215,921.11 is to be paid to the remaining defendants. All of the money will be paid to the Crown, which funded the defence for all five defendants.

Peters has said, however, he will appeal Justice Venning's April decision. His office did not reply to an approach for comment by the Herald on the costs ruling.

Bennett told the Herald earlier this week: "There was never any substance or proof by Mr Peters when making allegations about myself and Mrs Tolley.

But the details of the overpayment made their way to journalists in August 2017, a month before the general election.

Peters took legal action before he started negotiating with the National Party about a potential coalition after the 2017 election.