Australian Prime Minister Anthony Albanese has announced a major shift on the contentious "501" deportations policy towards New Zealanders and vowed to work on pathways to citizenship and grant voting rights to residents.

Albanese stated while Australia would retain the right to deport people it would now be done in a "common sense" approach based on "actions of friends".

"In situations where someone had lived their entire life in Australia and they have no connection to New Zealand we will work through it as friends and in a common-sense way."

Albanese said he and Prime Minister Jacinda Ardern had a "very successful discussion" this morning. The discussions also reflected the "reset" between the countries as announced during Ardern's previous visit.

"There are no closer friends than Australia and New Zealand," Albanese said after emerging from formal talks.

Albanese announced a range of reviews into policies affecting New Zealanders living in Australia, including pathways to citizenship, voting rights of residents, and deportations.

"We don't want people to be temporary residents forever," he said.

"We will work on pathways to citizenship with a timeline of Anzac Day 2023."

He said he and Ardern and ministers would work to ensure there were equal rights in their respective countries.

Those pathways and working through the issues, including getting more rights more consistently, Australians moving to New Zealand and vice versa, they would work on "full participation" in each other's society, Albanese said.

Meanwhile, "unilaterally", Australia would look into voting rights of residents.

"In New Zealand if you are a resident for a year you have voting rights, are able to participate fully in those processes," he said.

As part of the normal review process after a federal election, Albanese said they would look at returning systems of giving New Zealand people living in Australia, who are paying taxes, voting rights.

"I think it is a really common-sense position, to at least examine," he said.

On the 501s deportation policy, Albanese said the action around that would now be one of "friends". Ardern had "not been backward in raising the issue" in their discussions, he said.

Australia would continue to deport people, but "common sense" would apply, he said.

Ardern and Albanese also discussed new decisions, including having annual meetings with economic and international ministers, along with respective climate ministers.

This would focus on the shift to clean energy in the economy, Albanese said. There will also be foreign affairs and defence minister meetings.

Ardern said bringing the climate portfolio into the bilateral exchanges was important not only for the two countries working together but how they operated in the wider Pacific.

On the Pacific Islands Forum, Albanese said they were looking to engage with the Pacific family, on issues of climate change, and maritime security.

He spoke of Australia's plans to step up aid as well.

Ardern said it was auspicious to be in Australia during Naidoc week (National Aborigines and Islanders Day Observance Committee).

She paid tribute to Australia's indigenous peoples, and said that had been a focus of many of their discussions.

There was a lot they could do together around developing economies of their respective First Nations peoples.

Ardern said she felt they had established a work programme to bring to life the reset.

Ardern said they had been seeking common sense and working together as friends.

On the upcoming Pacific Island Forum and the China and Solomon Islands deal, Ardern said based on the Biketawa Declaration, regional security issues were for the forum.

She expected the issue would be raised at the upcoming meeting. She said they could work on ways to ensure the matters were discussed more among each other, while maintaining independence.

Albanese said the discussion was one of the reasons Australia was attending. He said he'd put forward Australia's concerns. It was an era of strategic competition in the region.

New Zealand was clearly opposed to the militarisation of the Pacific, Ardern said.

She also reiterated her desire for security issues to be discussed at regional levels.

Albanese said they were seeing security issues in the Pacific not seen a decade ago. China was being "more aggressive". They would work with China but stand up for Australian values, he said.

When Australia engaged in the region there were no strings attached, it was about bringing up the development of our neighbours, he said.

On climate financing, Albanese said he'd been speaking to many leaders and every discussion began with two points, congratulations and that the government he led was part of action on climate change.

He reiterated Australia's intention to bid for a future climate change COP conference.

On climate financing, Ardern said now was about delivery.

On cost of living issues and skills shortages, Albanese said the government was not targeting New Zealand workers.

The countries had common challenges, part of global challenges. They wanted to work together on those.

On the reset of the relationship, Albanese said he wanted to see them working together on as many issues as possible as there were a lot of common interests.

On the 40th anniversary of Closer Economic Relations agreement, Ardern said it was an opportunity to modernise and adapt the arrangements. 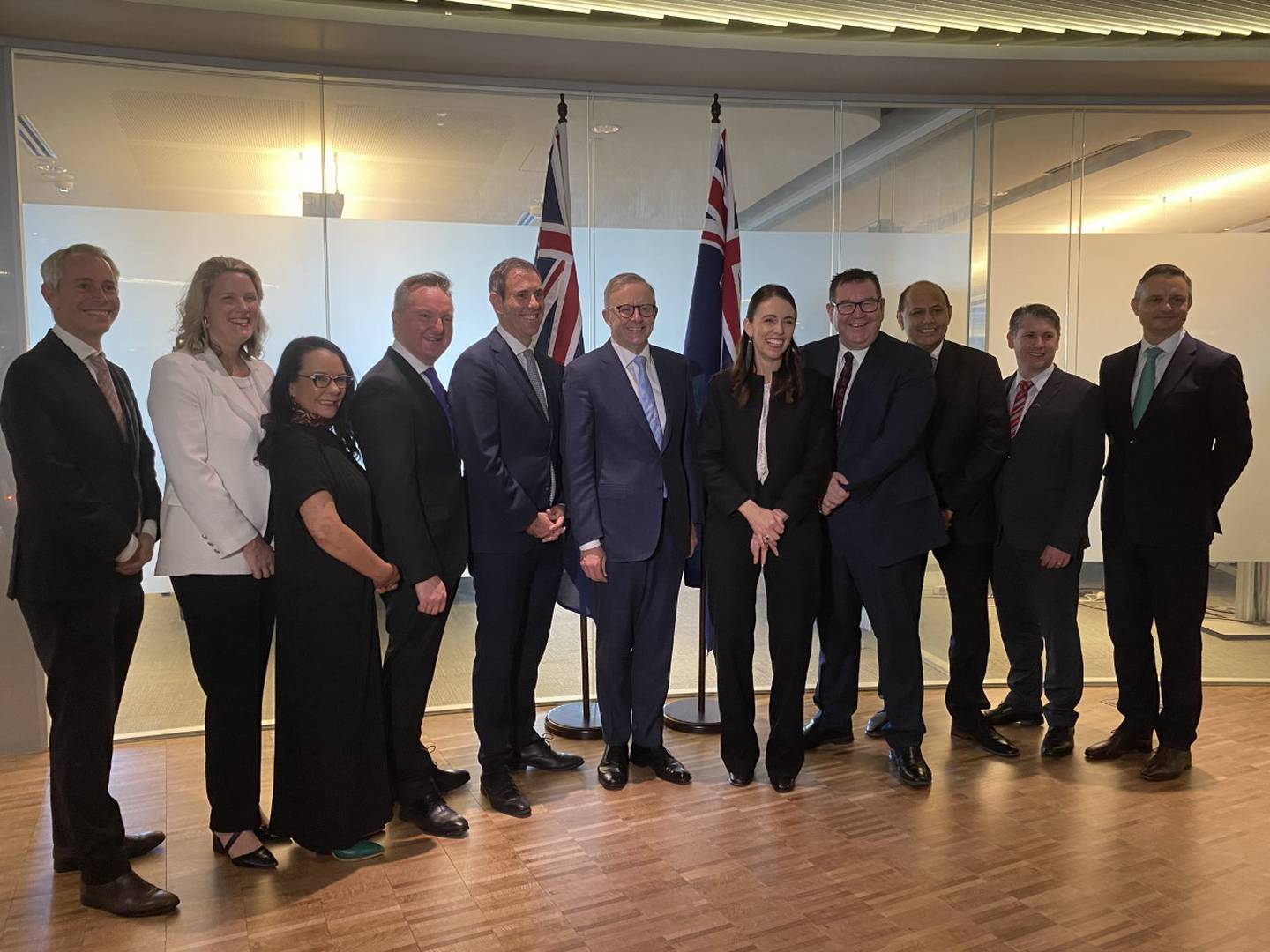 There were options in the digital and sustainability space, she said.

Before the meeting, Ardern picked up where she left off with her Australian counterpart.

Having met with Anthony Albanese in Sydney a month ago, caught up in Europe, and done a Q and A at a business conference on Thursday, the leaders of their countries' labour parties are well acquainted.

Before starting their official bilateral, while media were still allowed the room to take photos, they bantered about the music-themed gifts they exchanged during their previous meeting.

Albanese, who was given a selection of vinyl from Flying Nun artists, said this was "the best record label in New Zealand".

"Oh, were you expecting us to say something of diplomatic substance?" Ardern joked, before Albanese said in, "We're talking about Flying Nun Records – it's very important." 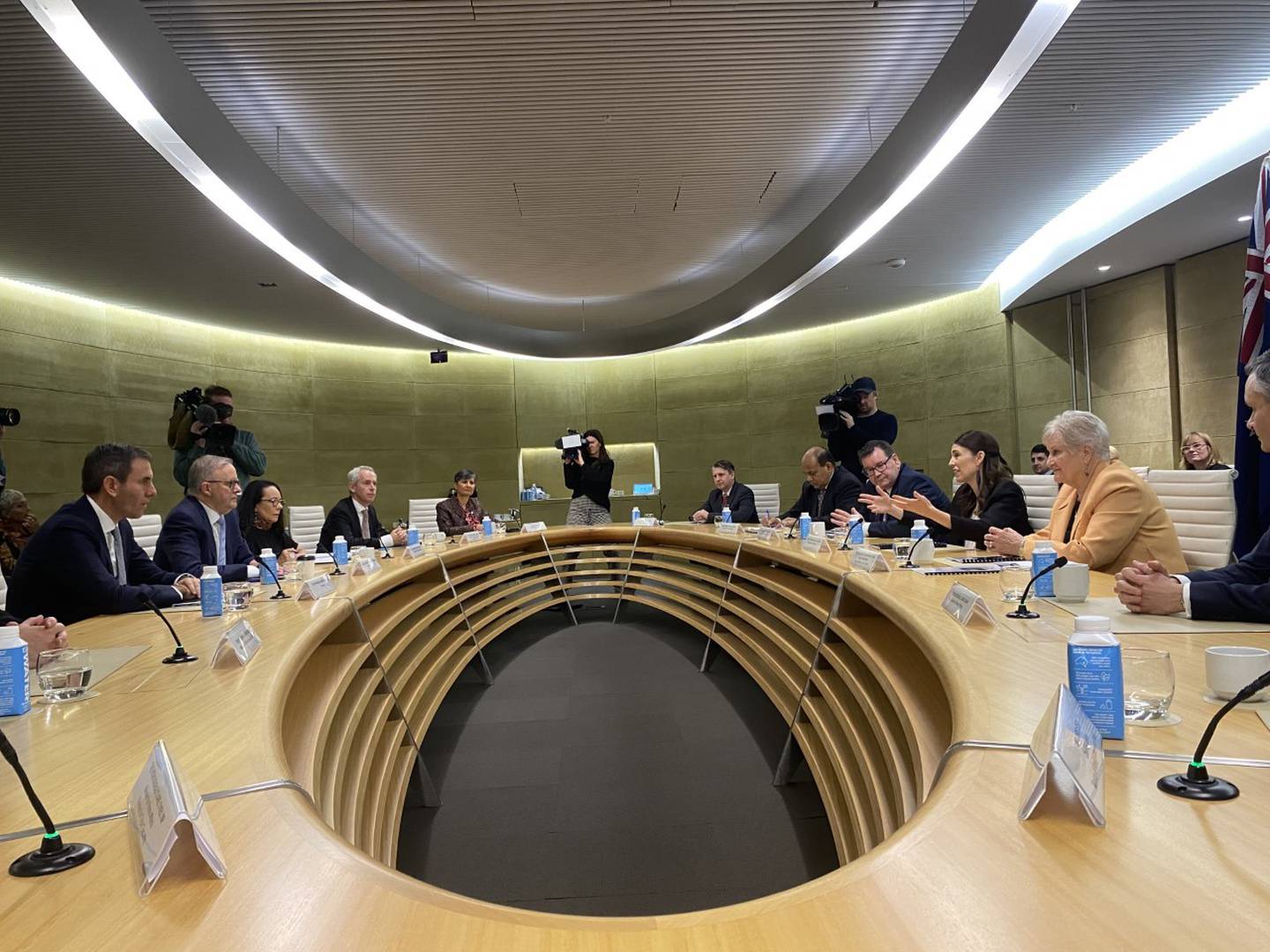 Ardern is expected to continue lobbying Albanese to improve the treatment of kiwis living in Australia – possibly by giving them smoother pathways to citizenship.

This would prevent Australia deporting New Zealanders with criminal convictions, with little connection to New Zealand.

She said she'd also talk to Albanese about his recent visit to Kyiv.

She said she was interested in what he saw on the ground and what role he believes New Zealand and Australia can play in Ukraine's reconstruction.

The two leaders will also talk about how to address China's increased presence in the Pacific, ahead of the Pacific Islands Forum in Fiji next week.

New Zealand has for some time, and continues to, take a more diplomatic approach towards China – the country's largest trading partner – than Australia.

Australia's Foreign Affairs Minister Penny Wong used an official speech she did earlier this week to challenge China to exert its influence over Russia to end the war.

Asked by media what her view was, Ardern said she had reached out to influential counties (i.e. China) at an official and ministerial level. She also diplomatically said Security Council members should use their influence to pressure Russia.

Earlier on Thursday, Ardern in a speech at the Lowy Institute, tried to cauterise the war issue, saying it's "Russia's war" and not a war of "the West vs Russia" or "democracy vs autocracy".

Accordingly, she said we shouldn't assume "it is a demonstration of the inevitable trajectory in other areas of geostrategic contest".

The two-day forum brought together more than 250 New Zealand and Australian businesspeople and government representatives to share ideas on common economic and political issues.

The last time the event happened in person was 2019.

Australia is New Zealand's second-largest trading partner, with two-way trade accounting for over $22 billion in the year to December 2021.