Auckland mayoral candidate Ted Johnston was egged at a mayoral debate on Tuesday night after accusing a member of the audience of being "team Efeso".

A man in the audience at the University of Auckland Debating Society debate threw two eggs at Johnston, one of which hit his dark suit jacket. The second egg flew past his shoulder.

The man, who fled the debate, threw the eggs after Johnston's comments toward a separate person in the audience who has a disability.

After the moderator for the debate, Jack Tame, explained the situation to Johnston, the mayoral hopeful apologised. 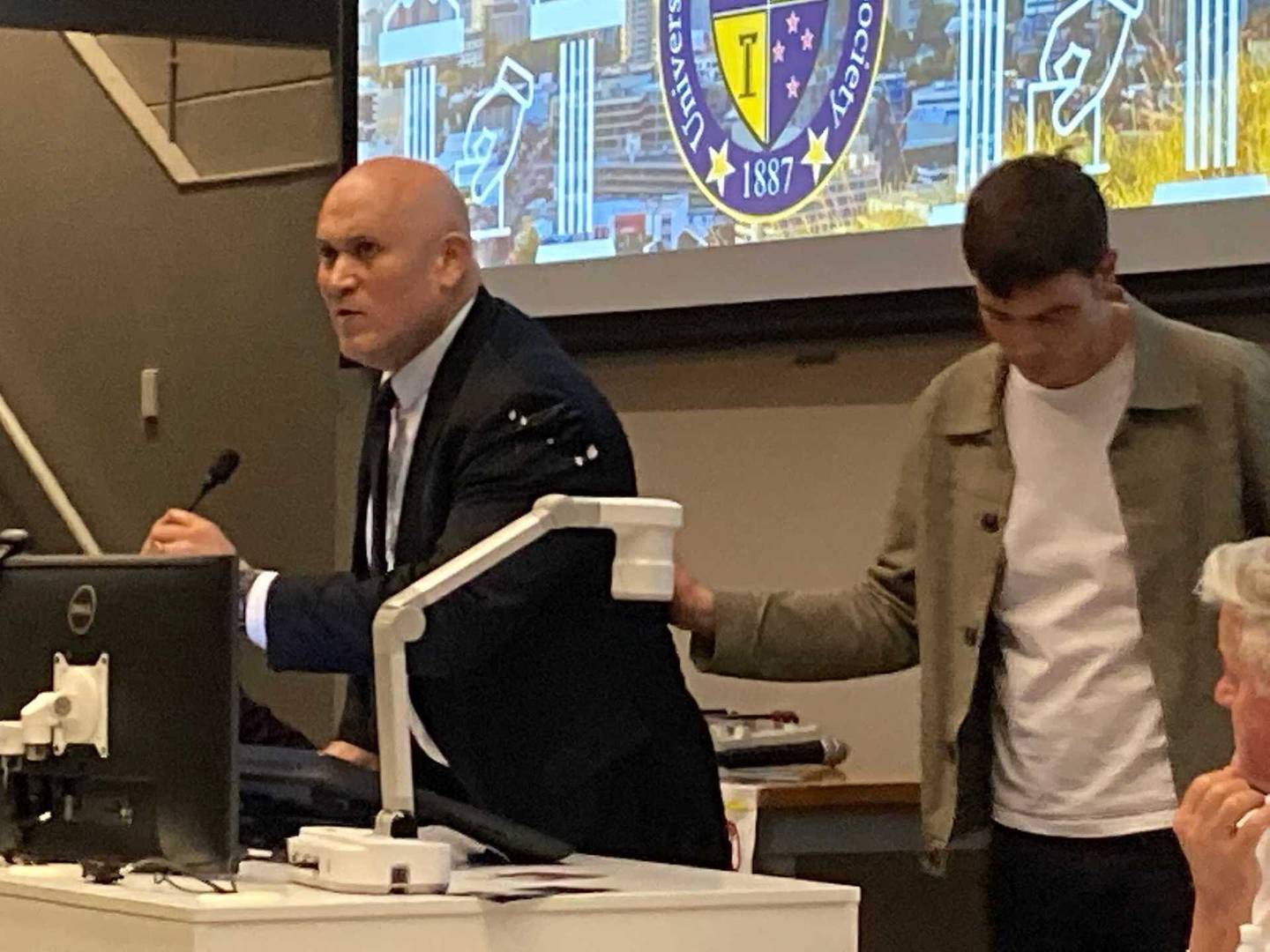 Auckland mayoral hopeful Ted Johnston appears to have been struck in the shoulder by an egg, seen here comforted by moderator Jack Tame. Photo / Bernard Orsman

The incident came during Johnston's discussion of council spending when he said - if mayor - he would put council staff through a budgeting course to correct spending habits that he considered irresponsible.

He then motioned to someone in the crowd, asking them to quieten down while dubbing them "team Efeso" - a reference to Labour Party-endorsed mayoral candidate Efeso Collins.

I chaired an eventful mayoral debate for the @AucklandUni debating society, this evening. I’m sure much will be published shortly.. and some candidates might be visiting the dry cleaner tomorrow. pic.twitter.com/AmZwPNbGC6

"At least my friend Leo [Molloy] fights his own battles, so just calm down," he said to members of the crowd.

He then attempted to get back on topic amid the din of noise emanating from the crowd, seemingly in response to Johnston's goading.

During another attempt to shush onlookers, Johnston was hit by the first egg. Witnesses say a second egg aimed in his direction missed Johnston but may have hit Lord.

Following the incident, Johnston said in jest: "I'll tell you what, it looks like Labour's getting scared of the job I'm doing."

Several people in the crowd responded with something to the effect of: "They're not Labour." Tame, as the moderator, intervened - urging everyone to "take a minute", discouraging Johnston's indication he could continue talking about council spending.

"Ted has made an ignorant comment, through ignorance," Tame said, despite Johnston's protestations.

Tame then apologised on behalf of Johnston for the comment and implored the crowd to hear the candidate out.

"I want to say I'm sorry for Ted's comment because it was really inappropriate," Tame said.

Upon being informed the person he was addressing had a disability, understood to be Tourette's syndrome, Johnston apologised for being unaware.

He then claimed he had been a bouncer around the world for 10 years and said "that sort of thing doesn't worry me".

Molloy, who recently caused controversy through his comments on satirical TV show, later piped up and said he felt the audience was "fantastic" and had "more energy".

"We've done about 50 debates, it seems like that anyway, we feel like we're speaking at an old peoples' home most of the time, I think you're all amazing," Molloy said.

His comment was met with laughter from the crowd.