Greens co-leader James Shaw says he has "no problem" working with New Zealand First again after this year's election, despite a recent spat with NZ First Minister Shane Jones.

But he has labelled comments made by Jones, in regards to his opposition to calls for Kiwis to eat less meat, "nonsense".

The pair have been at odds over how New Zealand responds to climate change.

Shaw has said that New Zealanders should eat less meat to help combat climate change – something that Jones strongly disagrees with.

The outspoken Minister of Economic Development yesterday lambasted this sort of advocacy was "eco Bible bashing," saying it was a form of absolutism he and his party wholeheartedly rejected.

"Absolutism is what we saw in the medieval days of putting people on the rack because there was an absolute sense of conviction that their perspective was the only perspective."

He said this type of climate change activism would never be tolerated by New Zealand First – "it will never prevail in our country".

He was also critical of some elements of the Government's – of which he is part of – plans to teach climate change in schools.

"You have seen that in the past where something comes sneaking into the school agenda and everyone gets upset and in the end, common sense prevails," he said.

He questioned who would actually be teaching kids about climate change.

"Who are these experts that are going to be in front of the classroom with this huge eco-awareness, knowledge and qualifications to go school-by-school to do this?"

Peters said: "I suggest they are not even going to get started". 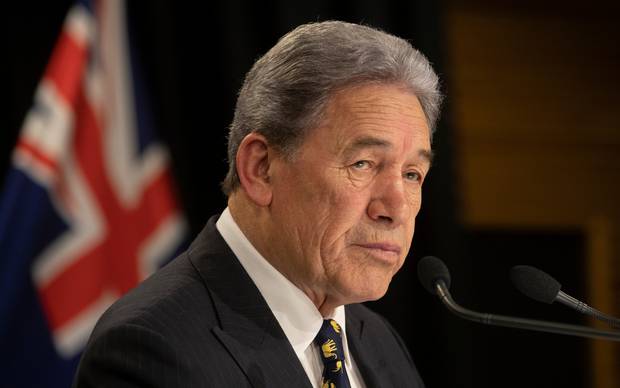 Although he said it was important to teach children about climate change and what they can do about it, "common sense" needed to prevail.

And, according to Peters, it was not "common sense" to teach Kiwi kids to eat less meat.
"To be sidetracked by extremists, who would think they would get rid of all these important people [meat farmers], and dare I say it the very economic life of this country, is not going to happen."

Speaking to Newshub this morning, Shaw attempted to play down the spat with Jones.

He said over the course of this year, election year, "a lot of stuff is going to be said".

"I think you have seen some opening salvos over the course of the last week or so and I anticipate as we get closer to election day, there will be a lot more nonsense that people spout as well."

Asked if he was specifically referring to Jones' comments, Shaw said: "I think that comment that he made… was well constructed by him to appeal to the kind of people he wants to appeal to".

Despite this, he said he had "no problem" being in Government with Peters and NZ First again after this year's election.

"Inevitability, is that there are compromises that you have to take," he said. Greens provide Confidence and Supply to the Labour/NZ First Coalition Government.

Some of those compromises, Shaw said, were "not comfortable".
"But the wins we get on the other hand easily make up for that."