Flaxmere Primary School kids didn't just get a free lunch today, they had it served to them by the Prime Minister.

PM Jacinda Ardern is in Hawke's Bay on Thursday to promote the Government's free and healthy school lunch programme, which is under way in the region.

She said 7000 students at 31 schools in Hawke's Bay/Tairāwhiti and Bay of Plenty/Waiariki are currently being fed by the programme. "A full stomach makes all the difference to a child's learning," Ardern said as she served up lunch with Education Minister Chris Hipkins.

"We are making good progress on tackling the long-term challenges that cause child poverty but none of the solutions are instant.

"Providing a free and healthy lunch at school is one way to help make New Zealand the best place in the world to be a child and to make that difference immediately.

"As we've seen at Flaxmere Primary, providing these lunches has also led to jobs for local families," she said.

Most of the 31 schools have selected external suppliers to provide their lunches, with five opting to prepare their own lunches.

"The model used by Flaxmere Primary involves whānau as key players in the design and delivery of its lunch programme," Hipkins said. 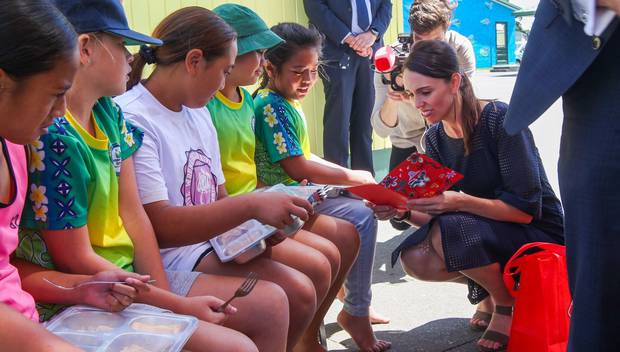 "All schools in this first tranche have worked hard to meet the requirements of the pilot and their insight will help to inform the ongoing rollout of free lunches in schools," he said.

The free and healthy school lunches' programme is one of 75 initiatives from New Zealand's Child and Youth Wellbeing Strategy launched last year, which was developed with input from 10,000 New Zealanders including 6000 young people.

Reducing child poverty is a key goal of the Government.

It hopes its $5.5 billion Families Package and initiatives in the Wellbeing Budget can raise 50,000-74,000 children out of poverty.