Green Party co-leader James Shaw joked about New Zealand First in his last speech in Parliament this term, but he shook Winston Peters' hand afterwards as the latter left the debating chamber.

Shaw followed Peters in the adjournment debate and began by saying it was always good to follow a speech by Peters – whose party is polling badly.

Shaw said he knew everyone was champing at the bit to get out campaigning around the country to try out their new election slogans.

"You can almost see the ads can't you?" said Shaw. "New Zealand First: You can stop progress.

"Act are making a bold play for the assault rifle vote, with: 'The Act Party – more deadly than serious.'

"And National have settled on a new leader with a new slogan: 'Why vote for the lesser evil?'" 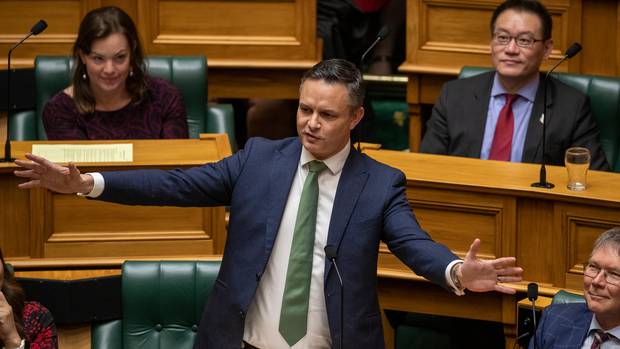 He also made a joke against the Greens as he talked about the different philosophies offered by the various parties for the post-Covid-19 rebuild.

"National want to grow the pie. Labour want to share the pie. Act want you to get your own goddamn pie. New Zealand First just want One Billion Pies.

"The Greens, of course, say that the growth of the pie is limited by the size of the oven. And whilst you're making pie, you should really keep your oven clean or you'll make your tamariki very sick.

"I know – it's not exactly bumper sticker material. But we reckon there's at least 5 per cent in it." Peters seemed initially startled by the speech, but then amused by it.

The Greens are a support partner to the Labour-New Zealand First Coalition Government but Peters and Shaw have been trading insults recently over the other's behaviour.

Shaw has called New Zealand First chaotic. Peters has said the Greens were "away with the fairies" over their wealth tax, and that a Labour-Greens Government would be a nightmare.

Ardern thanked the Greens and New Zealand First – which chose Labour over National to be a partner in Government in October 2017.

"We would not be here without you."

"Of course, during this campaign, there will be lots of sprinkling of dust and glitter and whatever else we may choose to call it.

"There'll be lots of shovelling of other figurative things. None of that, for me personally, will ever diminish what this Government and these three parties and these leaders have achieved, and so I say to the Deputy Prime Minister, I say to [Greens co-leaders] Marama and to James, thank you.

"Thank you to New Zealand First, and thank-you to the Greens. I'm immensely proud of what we have collectively done for Aotearoa New Zealand."

National leader Judith Collins was less gentle. She said she was about to join Bill Rowling as a one-term Prime Minister. 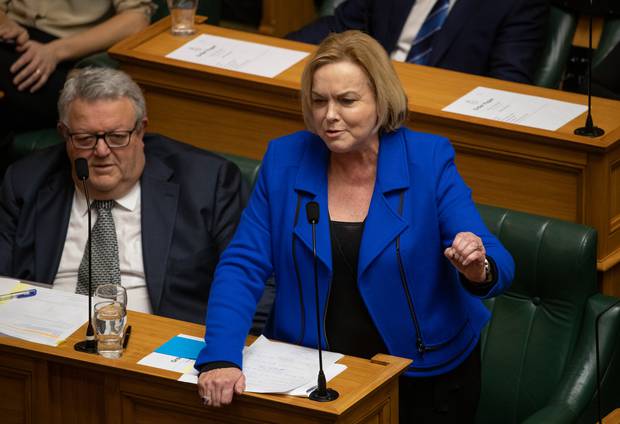 "The Prime Minister may wish to give us all a 'sweetness and light' talk, but actually it's time for reality. The New Zealand people need to know they have a Government that needs to know what to do. And this government on this side does."

She then spoke about the Government's track record.

"KiwiBuild. Wasn't that good — KiwiBuild. She went to the last election promising 100,000 houses in 10 years, 16,000 the first term. How many have they got—380, oh, 385, apparently. How about roads? What happened there? They stopped. Electric cars — remember, they were going to electrify the fleet, the Government fleet. I understand they've got 45. They've got 45. And then we had light rail. Remember where that is — somewhere stuck on the ghost train up Mount Roskill."

She said Peters would say he was a "handbrake" on the Greens.

"No, he's not. He's the enabler. There's only one reason the Greens are in Government, and that's because Mr Peters went their way."

Peters followed Collins and said "That was eyebrow-raising stuff—and I don't use Botox!

"All that criticism, for almost 10 minutes, and not one new idea. Out there in the provinces, in the hamlets of this country, all those people who were expecting something at least now, at the start of this campaign, from the leader of the National Party just got carp, can't, and criticism, but no vision, no plan, no policy."

He said after three year in Government, "we have no regrets". "National had run out of answers. It was making and framing the wrong questions, and only a change of course was going to allow the policy transformation that we sought."

He said National might be making a comeback some time "but it's not any time soon".

"I'm saddened by that, because the people of this country need a sound, strong Opposition. They need people of talent and capability, and they need far better than what they're getting now. So to our people out there, our message is: hang on. The campaign starts on Saturday morning, and help is on its way.

When the House resumes after the election, some of its rules will have changed after recommendations from the standing orders committee.