Ardern confirmed the meeting with Biden would take place on Tuesday at the White House. She would also be meeting with Vice President Kamala Harris.

"My intention is to continue the conversation we had in the Capital yesterday," she told media from Harvard University this morning (NZT).

She would be discussing the Pacific region and pushing for the US to join the CPTPP.

Ardern said she would also be passing on New Zealand's "sorrow" following the devastating events in Texas, where 19 children and two teachers were killed in a shooting this week.

The top-level meeting has been up in the air even before Ardern landed in the US after a recent bout of Covid-19 put the visit at risk.

Ardern was expected to visit the White House on her trip but strict White House protocols around Covid-19 have thrown things into doubt.

The New Zealand prime minister tested positive for Covid on May 14, nearly a week after her fiancé Clarke Gayford contracted the infection. No other country's leader had had Covid-19 so soon before going to the White House and that had resulted in uncertainty.

Her positive result meant she had to delay her departure by a couple of days to meet the US requirement of a 10-day wait after testing positive. That meant events, including to promote the film industry in Los Angeles, had to be scrapped.

It would break a long eight-year gap in between White House fixtures for New Zealand leaders.

The last visit by a New Zealand Prime Minister was John Key who went to see then President Barack Obama in 2014.

The Covid-19 pandemic has meant Ardern and Biden have not met in person since Biden was elected President in early 2021, although they have had phone calls and virtual meetings. 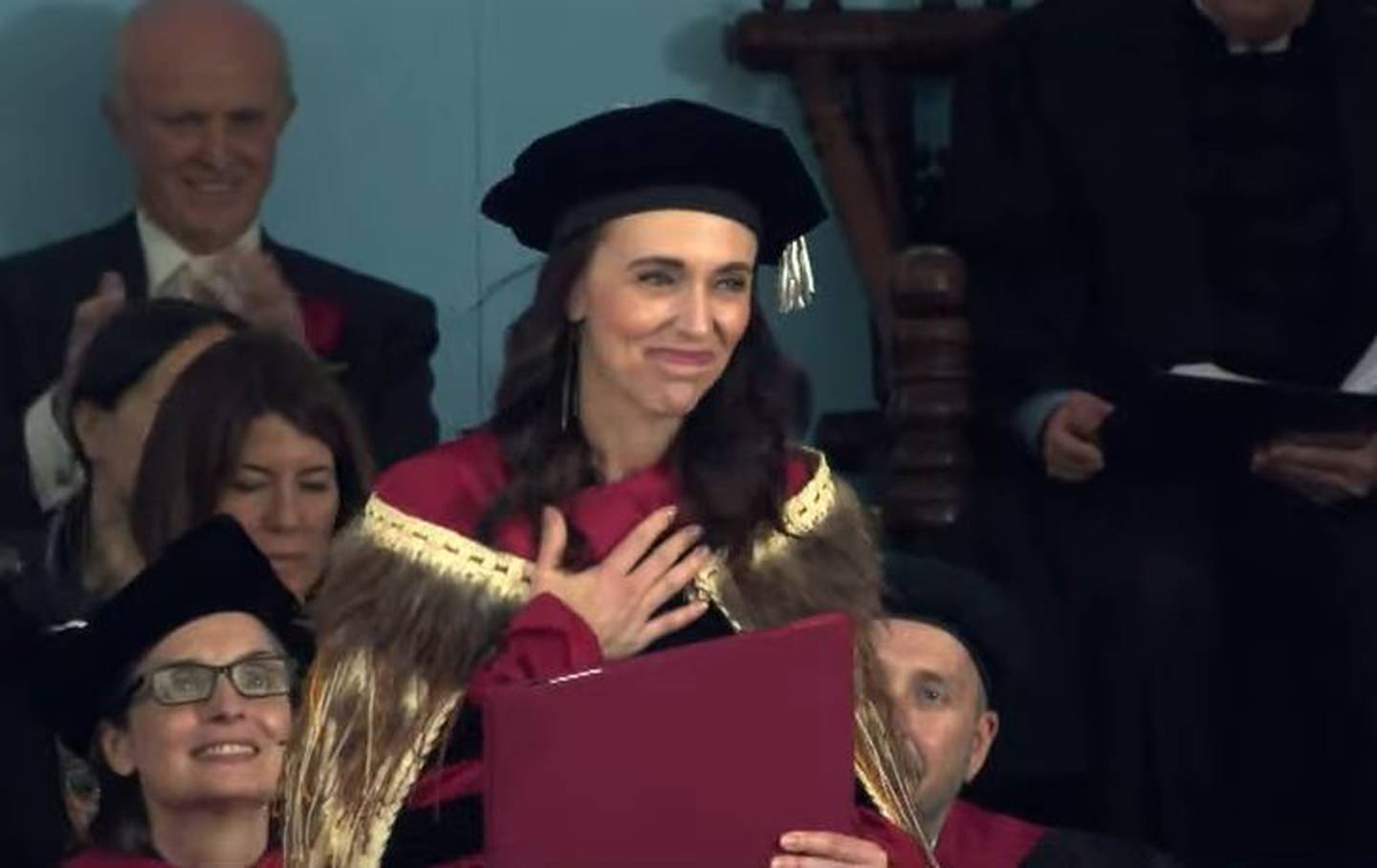 Ardern spoke to the 8000 graduates at the Harvard Commencement Ceremony in Boston today in front of an audience of about 30,000 people.

Ardern used her address to call for social media to clean up their act, saying she was concerned about violence, extremism and conspiracy theories that stemmed from social media.

However, it was her comment on New Zealand's move to ban mass assault rifles and gun reforms after the Christchurch terror attacks that got her the loudest applause.

The ceremony took place against the backdrop of mass shootings in the US. 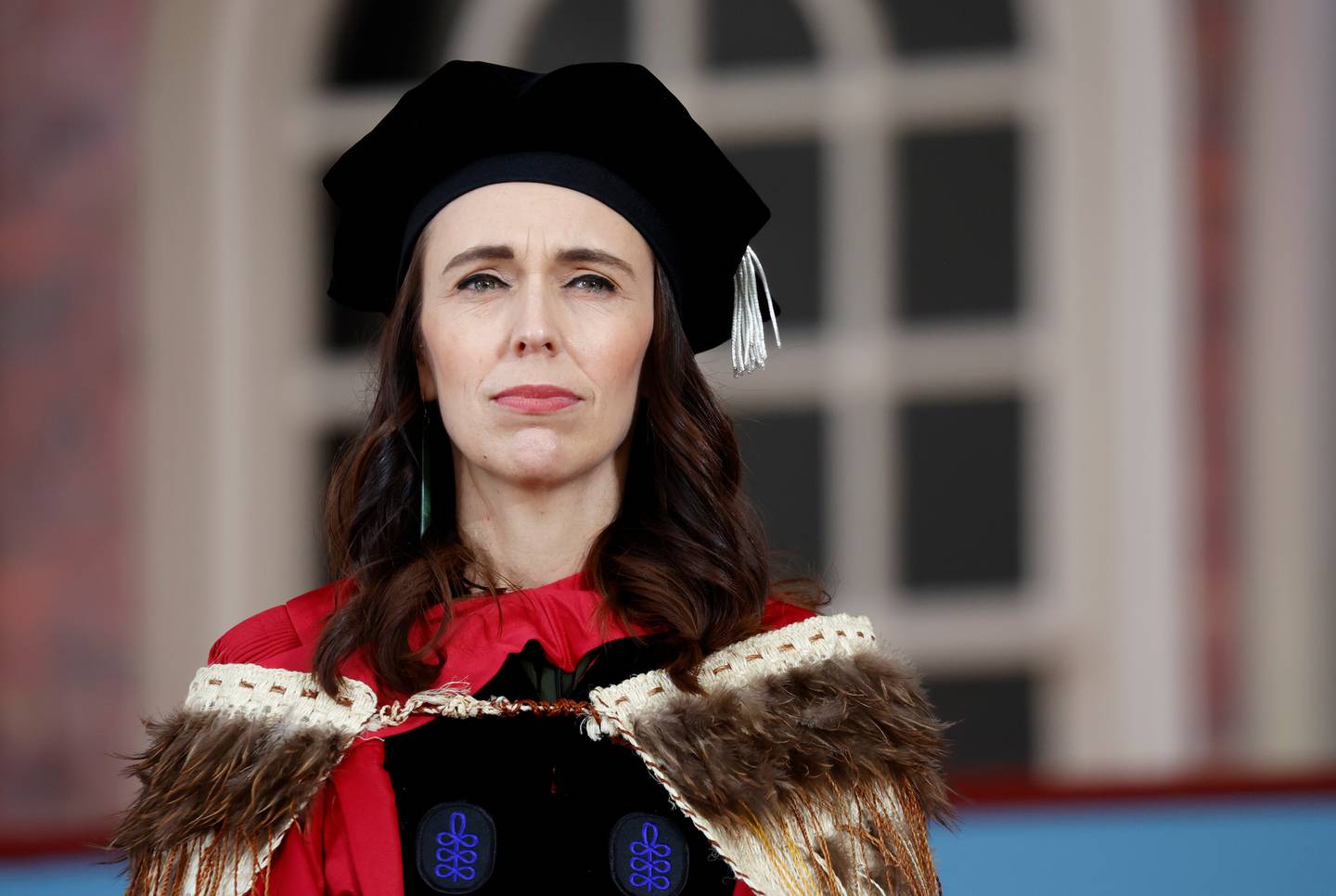 PM Jacinda Ardern is introduced as an honorary degree recipient before speaking at Harvard's 371st Commencement, Thursday, May 26, 2022, in Cambridge, Mass. Photo / AP

The recent Texas and Buffalo shootings were marked with a moment's silence for those killed in the shootings - and when the Education students graduated, many held up signs calling for gun law reforms - including "enough is enough" and "end gun violence".
The ceremony is also livestreamed and covered by many of the US media.

Ardern wore academic gowns after she was awarded an honorary degree as a doctor of law, her citation referring to her leadership after the mosque attacks and during Covid-19. The main call in her speech was for more action by social media companies to try to tackle the spread of misinformation and radicalisation - saying it was becoming a threat to democracy.

Ardern prefaced that by saying she feared the world was at "a precipice" and needed to find a way to deal with big issues without resorting to violence, vitriol or hate. Ardern said people naturally sought out views that were the same as theirs or that validated their own beliefs.

"And increasingly with the help of algorithms, what we seek, we are served, sometimes before we even know we're looking."

She used the Christchurch terror attack as an example, saying the terrorist had livestreamed the killing of 51 people, it had been widely shared and he had been radicalised online.

She did not directly mention the US shootings, but social media was also a factor in the Buffalo and Texas shootings.

Ardern said the tech companies signing up to the Christchurch Call had resulted in improvements on social media.

However, it was not enough.

"The time has come for social media companies and other online providers to recognise their power and to act on it.

"That means upholding their own basic terms of service.

"That means recognising the role they play in constantly curating and shaping the online environments that we're in. That algorithmic processes make choices and decisions for us – what we see and where we are directed – and that at best this means the user experience is personalised and at worst it means it can be radicalised.

"It means, that there is a pressing and urgent need for responsible algorithm development and deployment."

She said New Zealand undertook law changes on gay marriage, abortion, and gun controls with debate but without causing deep rifts in society. But other issues had tested society - she mentioned mistrust over Covid-19.

"Whether it's democratic elections that erupt into violence, or the Covid crisis exposing mistrust of experts, institutions and governments – western democracies are seeing it and experiencing examples and New Zealand is no different."

She said she was wary debate on how to strengthen democratic institutions would be "distorted" and misconstrued as being a bid to hinder freedom of speech.

"But that fear is overshadowed by a greater fear of what will happen to our democracies, if we don't act to firm up their foundations."

She urged the graduates to also take responsibility for their own engagement on social media.

"There's a term that gets thrown around a lot – keyboard warrior. It's used to refer to someone who makes aggressive or abusive posts online, often anonymously.

"I like the name. In my mind, when I read something especially horrific on my feed, I imagine it's written by a lone person unacquainted with personal hygiene practices, dressed in a poorly fitted super hero costume – one that is baggy in all the wrong places.

She said she was increasingly concerned about the impact that was having and increasing divisiveness.

Ardern said it was sometimes assumed that the longer a democracy had been in place, the more likely it was to be strong.

"It ignores the fact that the foundation of a strong democracy includes trust in institutions, experts and government – and that this can be built up over decades but torn down in mere years.

"It ignores what happens, when regardless of how long your democracy has been tried and tested – when facts are turned into fiction, and fiction turned into fact, you stop debating ideas and you start debating conspiracy."

Ardern told them she was not an academic: "I acknowledge, the robes on this occasion aren't exactly truth in advertising.

"Rather, I am a politician from Morrinsville. As a point of geographic reference, it's right next to Hobbiton. I'm not actually joking."

She said in Morrinsville "I lived in that important space that sits between difference and division".

"I was raised a Mormon in a town where the dominant religions were Catholic, Anglican and rugby. I was a woman interested in politics, left wing politics, in a region that had never in its entire democratic history, elected anyone other than a conservative candidate."

She said she had never felt isolated as a result of that.

"But I am old. And unquestionably, things have changed."

Ardern's speech was peppered with personal touches, beginning with a Māori greeting before making a gentle joke about the size of the occasion, saying she was used to walking into a room and knowing at least one person.

"There are some moments in life that make the world feel small and connected.
This is not one of them.

"I do take comfort knowing there are around 30 New Zealanders studying here, and statistically at least one of them will be my cousin."

Ardern met with New Zealand students at Harvard after her speech.

There was plenty of colour at the ceremony. The National Anthem was played on a trumpet with the students cheering and oohing and breaking into applause when the trumpeter hit a particular hard or long note.

It is the first in-person Commencement since 2020 - and several of the speakers referred to the Covid-19 lockdowns that had meant remote learning.

As each school was called they stood to graduate - the law graduates waving judges' gavels and the international school waving plastic inflatable globes.