Prime Minister Jacinda Ardern says there are no plans at this stage to move NZ back to the red traffic light setting despite a recent rise in Covid-19 case numbers.

There were 9629 new community cases today - up more than 3000 from yesterday.

Asked about the rise in cases after a meeting with Victoria Premier Daniel Andrews in Australia, Ardern said there was "no expectation" of moving to red at this stage.

"But keep in mind we have really important rules at the orange setting that are there to protect us."

Ardern said it was fantastic to catch up with Andrews after all the contact they had with each other over Covid-19.

"He's become a friend so it was fantastic to catch up in person."

She said they talked about what they might expect in the future with Covid, as well as rail infrastructure and sharing expertise.

She said her international travels had shown her New Zealand was using measures that many other countries didn't and that set New Zealand apart.

She referred to mask use, and compulsory isolation periods.

She said mask use and vaccinations were critical.

"We have hung onto them for two reasons. Winter [is one]."

"That was because of the pressure it put on health systems," Ardern said.

However, she said there was "a real question mark" over whether gathering limits would make a difference right now, especially in areas such as aged care.

On skills shortages in the tourism sector back home, she said the working holiday scheme and easier process to bring in workers would help.

"The balance to be struck is that NZ does have skill shortages in particular areas, so we have made it easier for workers in those areas to come in and to stay."

On leaving nurses off the Green List, Ardern said a change had been made so that, unlike before, there was now residency for New Zealand if nurses bonded to be a nurse for at least two years.

She said it was a global problem.

"What we have to do is make sure within New Zealand, we are increasing the wages and making sure we [have] safe standards - that requires us to increase nurses too."

Making a few brief comments ahead of the meeting, Ardern said she would talk to Andrews about challenges around mental health, infrastructure, and climate change.

She referenced New Zealand and Australia's "shared values", saying she hoped to continue being in close contact with Andrews, as she was when responding to Covid-19 in 2020 and 2021.

Andrews likewise noted the importance of the calls.

Both Ardern and Andrews have experienced the ups and downs in popularity due to their handling of Covid-19.

In 2020, Andrews was dubbed "Australia's Jacinda Ardern" after using lockdowns and restrictions to keep Covid-19 at bay – but surging case numbers and different variants ended up putting Victorians into one of the longest series of lockdowns in the world – a total of nine months between March 2020 and October 2021. 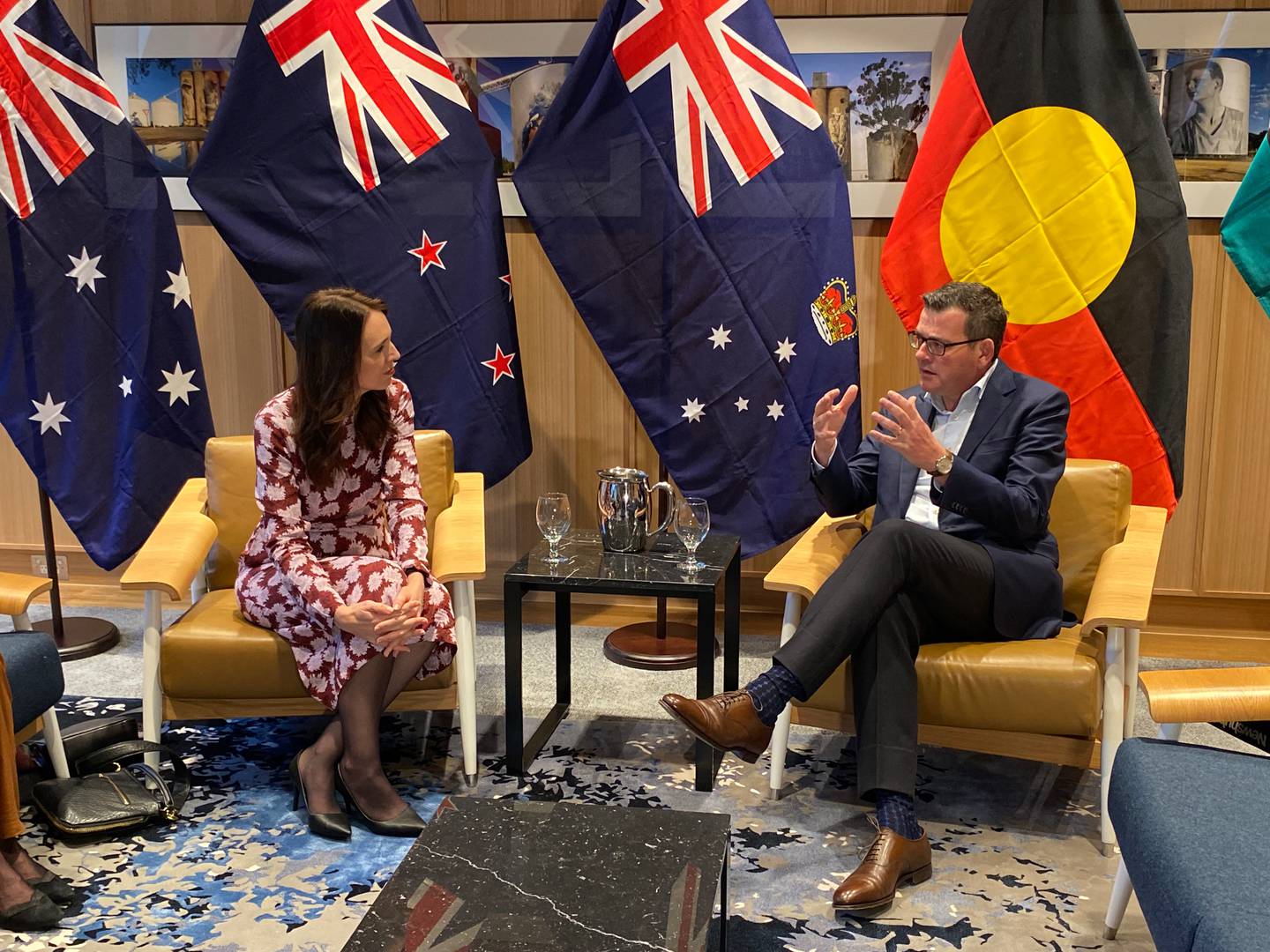 The two were in regular contact through the pandemic, especially during the ill-fated trans Tasman bubble, and both are now focused on re-opening and trying to attract back tourists and workers.

Andrews, who also leads the Victoria branch of the Australian Labor Party, is up for re-election as premier later this year and was first elected in 2014 – he is tipped to easily win re-election based on the polls.

Ardern spent the morning at a business breakfast hosted by ANZ focusing on sustainability and climate change, and was also attended by ANZ's New Zealand chief executive Antonia Watson.

Ardern is in Australia with a business delegation and the early days of her five-day visit will focus on business before her formal meetings with Australia's PM Anthony Albanese at the Australia-New Zealand Leadership Forum on Friday.

Ardern said yesterday that a business delegation to Australia was long in the planning – but had been delayed until now because of Covid-19.

"In my mind, regardless of Covid, this is the kind of trade mission I would be keen to lead. This is one of our key markets, whether it's trade, tourism or investment."

This afternoon, Ardern is visiting Monash Innovation Centre, which a number of New Zealand companies work with on innovation in food.

Her day is capped off with a networking dinner hosted by NZ Trade and Enterprise.