Prime Minister Jacinda Ardern says Kiribati has left the Pacific Islands Forum "for its own reasons", playing down any external factors but saying that the regional group needs to work hard to ensure it returns.

Leaders from Pacific countries including Australia and New Zealand are meeting this week in Suva, Fiji, for the forum's first in-person meeting since the pandemic.

It had already been billed as one of the most significant meetings yet, with climate change and Covid-19 high on the agenda, along with rising geopolitical tensions around a security pact signed between the Solomon Islands and China in April, and recent moves from the United States.

Now further controversy has struck before the leaders' meetings have even begun, with Kiribati announcing it is withdrawing.

The island nation is one of five Micronesian states that last year announced they would quit the forum over leadership issues.

On Sunday evening, 1News revealed a letter to the forum's secretary-general, Henry Puna, in which Kiribati President Taneti Maamau reiterated a leadership grievance over Puna's appointment in his role.

It had been seen by Kiribati and other Micronesian countries as a snubbing of their own candidate for the role that had been promised to them in a gentleman's agreement.

Concerns were also raised over reform packages made under the Suva agreement last month, which aimed to restore political unity and encourage Micronesian countries to remain in the forum. The Kiribati President said his country did not sign the deal. 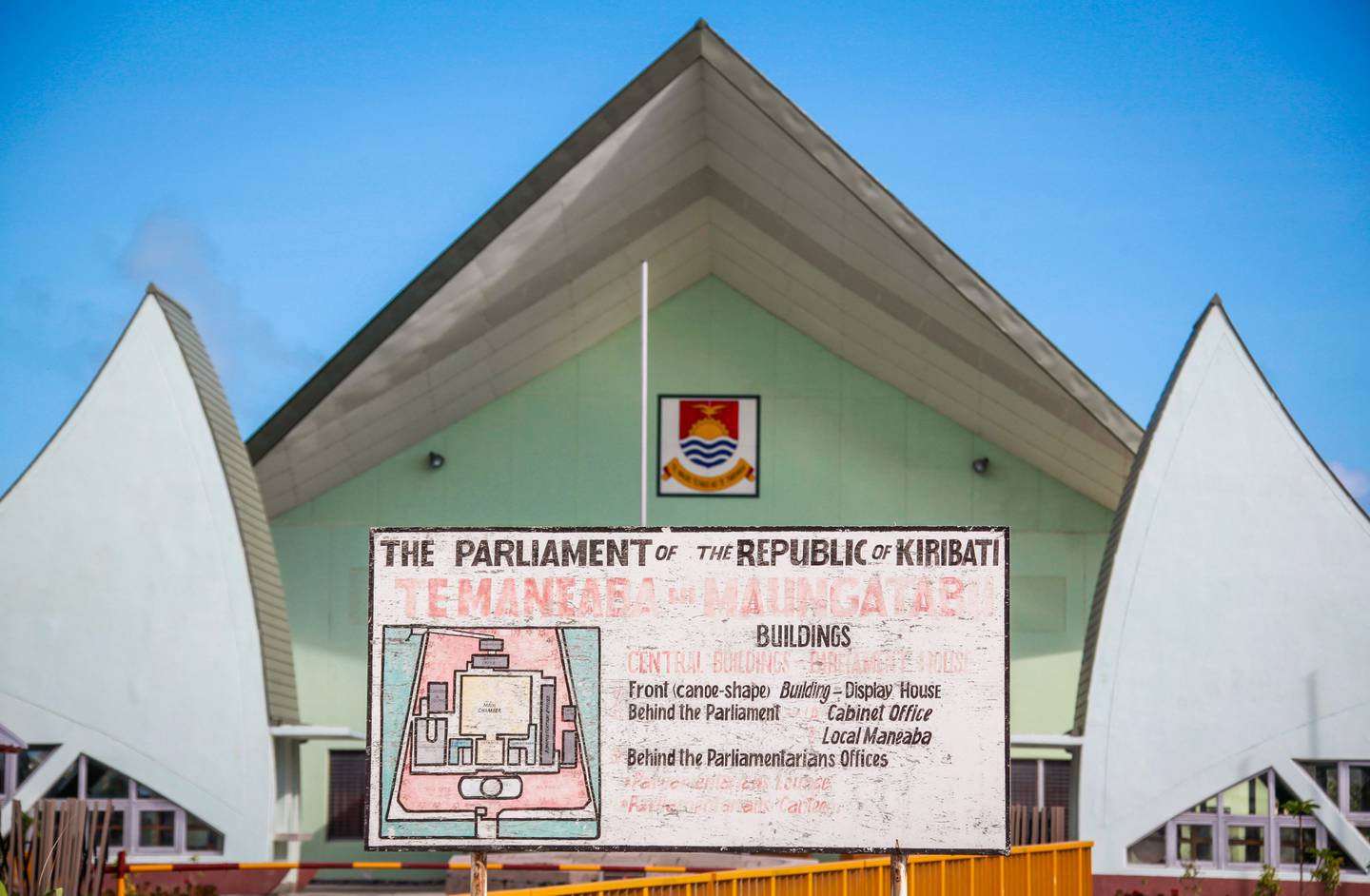 Kiribati has announced it is leaving the Pacific Islands Forum. Photo / Getty

The withdrawal has raised concerns China's increasing influence in the region could be behind the exit, with Kiribati's strategically important location, proximity to US military installations and marine resources.

In 2019 Kiribati changed allegiances from Taiwan to China, just days after the Solomon Islands did the same.

Due to the regional implications, the security arrangement with Solomon Islands and China's failed attempt to drum up support for a broader security and trade agreement, along with actions by the United States, was intended to be discussed at the forum "as a whole".

Ardern said she still expects these topics to be discussed and she hoped Kiribati could be encouraged to return.

Ardern said she did not want to speculate further than the reasons stated for Kiribati's withdrawal.

"They are very much relate to issues around the role of Micronesia within the forum," she said.

There had been much work to try resolve them but ultimately they had not worked, she said.

It was "disappointing" but the job of the forum no was to make sure they could continue working together on collective issues like climate change.

On security matters, Ardern said, based on principles in the Biketawa and Boe declarations, they needed to discuss further how to such security proposals in future.

"A decision made by one has the potential to affect all of us. Now that does not take away from the individual sovereignty of any nation.

"When it comes to you the issue of a member having chosen to withdraw, I do think it is something we need to think about at the forum.

"Because of course, the goal is to have complete forum membership in the future

"I hope they would [rejoin], and I think we should all work towards that. But that is their own decision."

Asked about the recent push from both China and United States, Ardern said it was "nothing new".

"A number of countries have had relationships in the Pacific for a number of years," Ardern said.

"That would include the likes of China, the US, the UK, the EU, Japan and others.

"Those alternate relationships outside the immediate Pacific family have been long, long-standing.

"The issue for us is where those relationships dip into a space that they start having an impact on the wider region.

"That is where we think that obviously we should try and meet those needs ourselves. we should also bring those issues to a place where we can have that dialogue together."

On climate change, Ardern said New Zealand supported Vanuatu's case to get the International Court of Justice – the world's highest court – to issue an Advisory Opinion on the climate crisis.

If successful, this would have huge implications for climate litigation and could shape
the way that domestic and international courts address issues relating to climate change.

Chaired by Fijian Prime Minister Frank Bainimarama, this week's forum will also seek the endorsement of the Blue Pacific Continent strategy - a regional roadmap to 2050.

What is the Pacific Islands Forum?

The forum was founded in 1971 to enhance co-operation between countries and territories of the Pacific Ocean, including on issues such as trade, security, environmental issues and peacekeeping operations.

There are 18 member countries and 18 observer countries. A forum chair rotates every year and members meet annually. The last in-person leaders' meeting was in Tuvalu in 2019, prior to the pandemic.

Climate change has been a major concern at recent forum events, with calls for Australia and New Zealand as the largest and wealthiest - and biggest emitters - to not only do more domestically but raise the issue internationally.

New Zealand is seen as a leader but, under Scott Morrison, Australia's relations soured. New Zealand has committed to 50 per cent emissions cuts by 2030 and $1.3 billion in climate financing over next four years - at least half for the Pacific.

Meanwhile, Australia has upped its pledged cuts to 43 per cent under Albanese, and its annual climate financing is currently around AU$400m - slightly more than New Zealand but far less per capita.

Announcements are expected during the forum from both countries, particularly from Australia as the new administration seeks to start a new chapter on climate change and drum up support to co-host a global climate change summit with Pacific nations.

Militarisation of the Pacific

Geopolitical tensions have been rising in the Pacific, further sparked by a security arrangement between the Solomon Islands and China at the start of the year.

Tensions have been further stoked as China toured the region seeking to drum up support for a broader security and trade agreement, which was ultimately turned down by Pacific countries, with the caveat that it would be discussed at the Pacific Islands Forum, as per the Biketawa Declaration.

The United States has also entered the fray, conducting its own tour and seeking closer security ties with New Zealand and allies including the establishment of the Partners in the Blue Pacific. The forum offers the first opportunity for these issues to be hashed out at a regional level.

Unity in the forum

In February last year, five Micronesian states - Federated States of Micronesia, Kiribati, Nauru, Palau and the Marshall Islands - announced they would leave the forum after a leadership dispute. After much negotiation, Pacific Island leaders struck a deal in June, which is expected to be clarified at the forum.

Kiribati, however, has now unilaterally withdrawn, stating it never signed that agreement.

The forum will also seek the endorsement of the 2050 Strategy for the Blue Pacific Continent, a long-term vision for the region.

Signed in 2000, this was established to co-ordinate responses to regional crises. It was agreed in the regional context of the 2000 Fijian coup d'état and ethnic tensions in the Solomon Islands.

In short, it holds forum members to decide collectively on matters that affect the region as a whole, as opposed to individual nations. It commits forum members to core values and where breached, members agree to a co-ordinated response.

Its powers have been invoked regarding issues in the Solomon Islands, Tonga riots in 2006, and suspending Fiji after it failed to hold elections after the 2006 coup.

The declaration was invoked to respond collectively to the pandemic, and also referenced during the 2021 Samoan constitutional crisis.

It was upgraded in 2018, with the Boe Declaration, to include issues of human security, environmental security, transnational crime and cybersecurity.