Simon Bridges says the resignation of Labour President Nigel Haworth the sex scandal gripping the party is just the start.

Bridges says the role of those advising Ardern need to be fleshed out along with the involvement of Finance Minister Grant Robertson.

He says clearly senior staffers have been involved in a cover-up.

Haworth resigned after Jacinda Ardern challenged him over his handling of serious allegations against a Labour staffer.

The Prime Minister confirmed the resignation this afternoon following claims this week from the complainants that contradicted Haworth's version of events.

The complaints were about the behaviour of a Labour staffer, including allegations of sexual assault, bullying and intimidation, but Haworth has insisted that the party was not told about claims of sexual assault.

Speaking to reporters at Parliament today, Ardern said that the Labour Party had caused further harm and additional distress to the complainants.

"Raising an allegation of sexual assault is an incredibly difficult thing to do; for additional distress to be caused through the way those allegations are handled is incredibly upsetting," she said.

"That is not acceptable. That is also why I am issuing an apology to those complainants on behalf of the Labour Party." 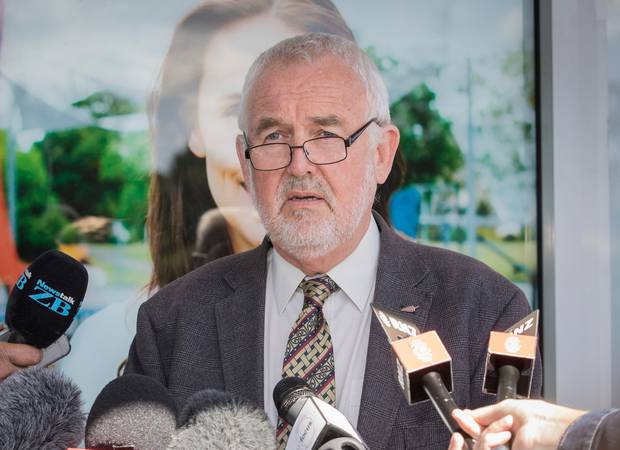 Complainants have said that the process was re-traumatising, with poor communication, no natural justice, and requests to see transcripts of their testimonies ignored for weeks, and then only provided after the investigation had concluded.

Ardern said she had seen correspondence from a complainant to the party today that showed how harmful the process had been.

She raised her concerns with Haworth, who then offered his resignation, even though the issue of whether he may have misled her remains unresolved.

Haworth continues to stand by his claim that neither he nor the Labour Party's panel that investigated the complaints knew about a sexual assault claim.

But the complainants dispute this, with some releasing email correspondence to back up their claims.

Ardern said the correspondence she saw today showed serious allegations about the Labour staffer, but would not say whether it contained a sexual assault claim.

Asked why she hadn't sought the correspondence sooner, Ardern said that she asked to see it as soon as she knew it existed.

She added she would be happy to meet with the complainants.

A 19-year-old woman has said that the Labour staffer pinned her down and attacked her in a private residence.

The staffer's lawyer says that the claim is "without foundation".

The party's investigating panel looked into seven formal complaints against the Labour staffer, but decided in July that no disciplinary action was needed.

Maria Dew, QC, has now been brought in to review not only the process but also the complaints themselves, following complainants' concerns that allegations of sexual assault were ignored and that the process was botched and unfair.

Ardern said she still wanted Dew to complete the review and resolve the conflicting accounts.

Ardern said Labour had made mistakes, just as it had in dealing with allegations of indecent assault at a Young Labour summer camp at the start of last year.

The party did not have the expertise to deal with the complaints, she said.

"The kinds of things that were brought to the party should have been dealt with externally."

In a statement, Haworth said his resignation was effective immediately.

"I've come to the conclusion that regardless of the outcome of the appeal process into complaints about a party member, fresh leadership will be required to take forward any recommendations from that process."

He said he would not be making any further comment.

National Party deputy leader Paula Bennett said during Parliament's general debate that some of the complainants had approached people in Labour, including former chief of staff Mike Munro and Rob Salmond, who works in the Labour leader's office as well as the Prime Minister's office.

senior staffers won’t comment because I made my statement under parliamentary privilege. Rob salmond took a complaint from 2 parliamentary staffers. Mike Munro, Andrew Campbell have known for months & months. Beth Houston tried to downplay and manipulate victims. Called out.

Bennett asked Ardern during Question Time whether she said stood by her previous statement that no senior people in her office had received a complaint.

Ardern said she stood by the statement at the time she said it.

Outside the House, Bennett said that Beth Houston, who works in Phil Twyford's office, also knew about the complaints.

"There are so many senior people within the Prime Minister's office and other senior ministers that know and knew the extent of it that it is inconceivable that [Ardern] wasn't told," Bennett told reporters.

"I find it very hard to believe that one of the senior people in her office didn't inform her that there was some form of sexual assault to one of her staff members. She needs to come clean with everything she has known, and when."

Bennett said the complainants claimed that Grant Robertson knew about the sexual assault claim and had "deep alliances" to the Labour staffer.

Robertson has not commented on what he knew, saying he wanted to respect the privacy of the complainants.

"I'm comfortable with what I've done in this process," he told reporters today.

"There is a process underway with a QC where the voices of these people need to be heard. I have to respect that process."

The staffer agreed five weeks ago to work away from the Parliamentary precinct, though complainants have reportedly said they have seen him on the premises during that time.

Ardern said she was seeking advice on the Labour staffer's job, adding that none of the complaints were raised with the staffer's employer Parliamentary Service.

Some of the complainants have responded to the resignation of Labour Party President Nigel Haworth, saying while it was a step toward acknowledging Labour had failed them, there was a still work to do.

A statement from a representative of six of the complainants said Labour need to make the changes required to ensure the same mistakes did not happen again.

"We must also not forget that there is still a person facing these serious allegations in the Party, and we need to take immediate action to ensure that no more people can be harmed."

The representative also voiced concerns about reports of efforts by some in Labour to uncover the identities of those involved, saying they would not make any media appearances because of it.

"We are still calling on the Prime Minister to ensure that the other changes are implemented comprehensively.

We are still calling on Nigel Haworth to apologise to the survivors for the handling of this process under his leadership".