Noel Peterson is the green wizard of Bluff — a man with a passion for both the environment and local politics. But could he be the next mayor of Invercargill? As Sir Tim Shadbolt takes aim at a 10th term, Peterson says he is coming for the throne.

In an inconspicuous house at the bottom of the world lives a man immersed in green.

Noel Peterson likes to talk, but it is his colourful attire which speaks the loudest.

Adorned in a dazzling display of medieval dress, Peterson is the self-confessed wizard of Bluff: a man on a mission to raise the profile of environmental issues in his pocket of the world.

Wearing the mayoral chains is also the aim.

"The attire makes no difference. It's rather impractical. It's very hot. It tends to freak a lot
of people out a bit," Peterson says, referencing the eccentric uniform he reserves for special occasions.

On one such special day, a sunny Wednesday afternoon in Bluff, Peterson is dripping in green. Head to toe.

When he steps foot into his garden, he is camouflaged among the plants. 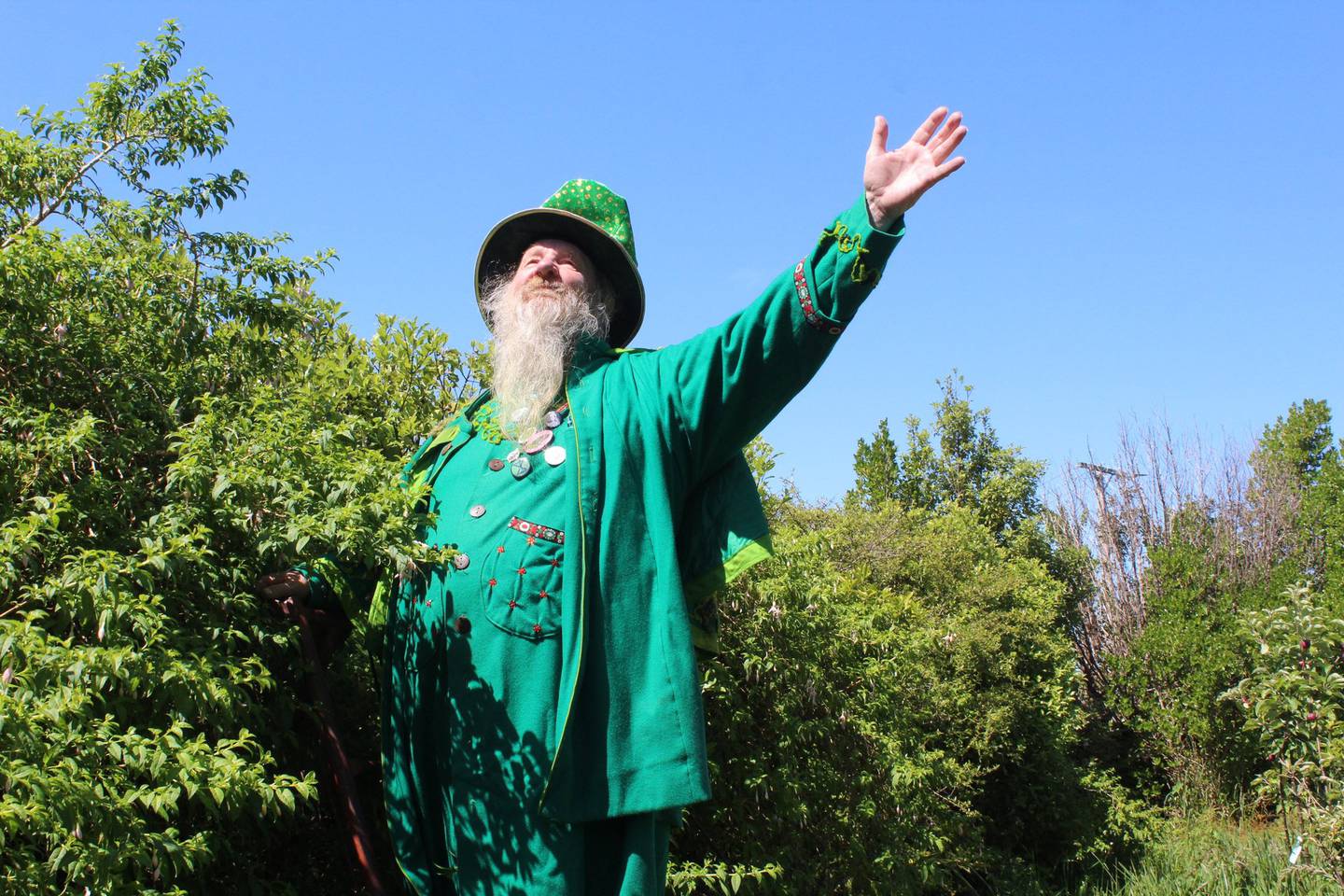 Peterson says he is a green wizard, and has always felt at home in nature. Photo / Matthew Rosenberg/LDR

It is a far cry from the Invercargill City Council chambers — where he can be found at most public meetings — but the garden is where he feels most at home.

He is farming worms and generally just letting the plants go for it.

"I'm into natural," he says of the organic chaos, which would give most green thumbs a headache.

Peterson is not most gardeners, however, or people, for that matter. The 68-year-old is a wizard, and one who has a knack for inserting himself into local political landscapes.

Prior to arriving in Bluff four years ago, he went up against Winston Peters with the Green Party and even had a crack at the Tauranga mayoralty in 2016.

Both runs were unsuccessful, but when Peterson shifted south, he found a new home on the Bluff Community Board.

At most Invercargill City Council meetings, he can be seen reclined in public seating area, absorbing dense political jargon like a civic sponge. In keeping with his passion for looking after the environment, Peterson drives a small electric vehicle. Photo / Matthew Rosenberg/LDR

It is not without some motive, considering he hopes to be the next southern mayor.

"I think that it's firstly a matter of listening to what the people want. I have lots of ideas for caring about the environment. I'm into green technology," he says.

"I'm very much the kind of person if something is wrong with your street, I actually contact the council and say 'hey, this needs fixing'."

Politics and wizardry is an interesting mix, and over a cup of herbal tea, Peterson is keen to unpack his journey into the latter.

It wasn't until about 2010 that Peterson would become a wizard, an occupation that came about almost by chance while working with children with disabilities.

One day, the children asked the programme co-ordinator, "who is that fella?", Peterson recalls, to which they were told "oh, he's the wizard".

It stuck, and when the same group of children went up the Mōtū River in the Bay of Plenty for a class trip, they brought Peterson back a staff, which sealed the deal.

He has been the green wizard ever since. 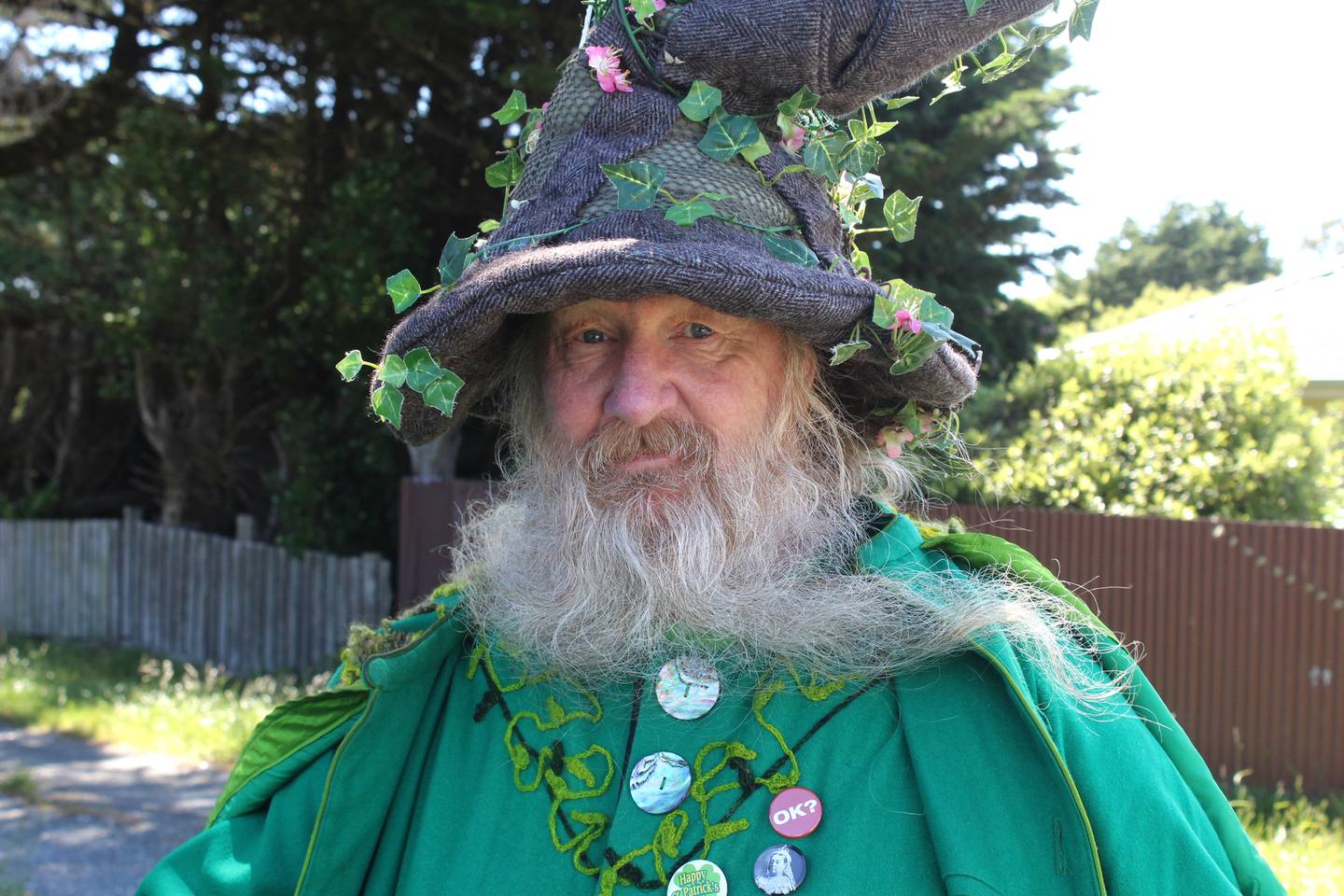 The ex-Tauranga resident was drawn to Bluff because of its history and potential for becoming an eco-village. Photo / Matthew Rosenberg/LDR

Peterson called Tauranga home his whole life prior to shifting south, a big move considering he had only previously spent a total of one day in the South Island.

"I decided that the South Island was a totally unexplored area for me, so I started looking ... Bluff ticked more of the boxes than anywhere else," he says.

Some of those boxes include the history of the place (he says Bluff is one of the earliest ports in New Zealand), and the potential for the town to become an eco-village.

Despite being a self-confessed extrovert who's not afraid to put himself out there, Peterson is also introspective.

He lives alone, which is something he says he's felt for most of his life.

As a child, he felt distanced from people, and more connected to plants and animals than fellow humans.

Some of his earliest memories are being alone as a toddler exploring the long grasses, which felt like a forest at the time.

On the occasions he's found love, it has often left prematurely. He has buried his wife and previous two partners. His surviving family — three daughters, 10 grandchildren and five great grandchildren — all live in Australia.

But Peterson says he doesn't feel isolated because he's connected to the world through his computer.

"A lot of what I do these days contacting the community, I do through the magic of the internet. I do it online from the wizard's lair."

Will he cast a spell to make his mayoral dream become reality? It is possible. Anything feels possible with Peterson at this point.

Mid-conversation, he gets up from the table and leaves the room, re-emerging moments later with a collection of small cloth bags containing four wooden utensils: his wands.

They are custom made in the United States by a company named Magical Alley, and Peterson says he casts spells when he "feels the need", proceeding to do exactly that.

"I've got this perfect alignment to the north ... ptshhh! To the east ... ptshhh!

"If I want to cast one to the south, I have to go to the top of the hill."

Fortunately, it's within walking distance, or he can take his car — a 2014 Smart ForTwo which is something of an electric cocoon for the green-minded wizard.

Peterson bought the vehicle in Christchurch during a trip which ultimately connected him with the wizard of New Zealand, Ian Brackenbury Channell.

After bumping into Channell (more commonly known as Jack) in Cathedral Square, the pair linked up in Oamaru for a three-day wizard gathering, joined by other wizards from around the country.

"Wizards often argue with each other, and don't get along. We had a gathering for three days, and on the third day in the morning, Jack actually started telling all the other wizards what they had to do. And that didn't go down well, and the argument went on for about eight hours.

"Anyway, they had this great big row, and the Otago wizard actually resigned."

Peterson says the guild has not gone much further, and communication with leader Jack is limited these days.

Regardless, he pushes on with his own agendas: raising the profile of environmental issues through his online presence and gearing up for his next run at mayoralty.

Through all the ups and downs, he chooses to remain positive.

"I'm the good wizard, the kind wizard, and the happy wizard. The outgoing wizard.