National kicked off its 2021 Party conference promising to "learn the bitter lessons of 2020", acknowledging that even the party's own members think the people shortlisted to run for the party "were not suitable to be MPs".

But the Party's report to members gathered in south Auckland painted a sombre picture, showing it had fallen "well short" of its membership target, with paying members having dropped by about 5000 in a year.

It is the second time the party has promised to do better by its rank and file since the election. An AGM held just after the 2020 election had the same message.

This time leader Judith Collins returned to party faithful, saying her MPs had listened and learned what they had been told at that meeting.

"Your caucus has listened to you. You have told us that you want unity, respect and professionalism," Collins said.

"You want your caucus working together and backing each other and we have listened and we are serious," she said.

Collins came with a scalp of sorts to show how serious she was about loyalty. In June, she hauled former leader Todd Muller before caucus, which effectively forced him to retire after he admitted to briefing a member of the media.

Muller has been on extended leave since he announced his retirement. Collins today wouldn't dampen speculation that she might have put pressure on Muller to leave Parliament before the next election, when he is currently scheduled to exit. 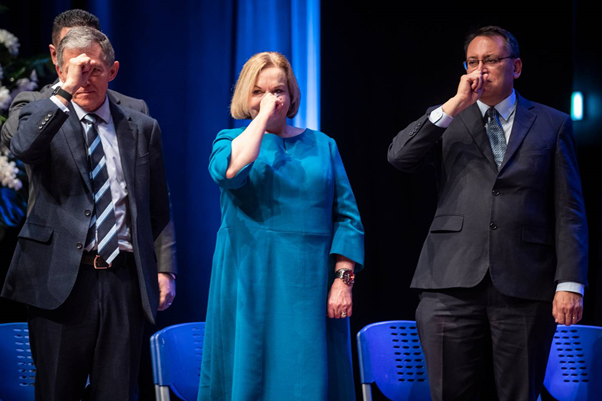 She would only say that if she wanted Muller to go early, she'd ask him herself.

"I think most people who know me [know] I'm not really a proxy type of person," Collins said.

Other questions of unity were also on display.

This week, the Party took a united stance against the first reading of a bill that would ban conversion therapy.

This was despite some speculation - including from the Speaker Trevor Mallard - that members might like to vote with their consciences rather than along party lines, as National MPs had done during votes on same sex marriage.

Instead, National block voted against the bill's first reading. A united stance meant MPs on the party's liberal wing like Chris Bishop and Nicola Willis copped extensive criticism for voting against the bill.

When asked about why MPs weren't given a free vote on the issue, Collins said "these are matters that are discussed in caucus and they stay in caucus".

"These matters are always decided by caucus. The leader does not decide that, the caucus decides that," Collins said. Party President Peter Goodfellow, who will face re-election on Monday, also promised that he'd learned the lessons of a disastrous 2020 and 2021.

Reporting to members, he promised the party was rolling out recommendations from a review, still kept largely secret, into the party's 2020 campaign.

"We are a team and we need to behave as one, and a winning one at that," Goodfellow said.

He promised reforms to the party's Candidates College - a training ground for future MPs.

He said the party's campaign review "identified the College needs a refresh and revamp to ensure its long-term viability".

Party members had told the review they believed "many College participants were not suitable to become MPs".

Goodfellow said in future the selections would cover "more extreme and comprehensive vetting, wraparound support and education, and a focus on core Party values and principles".

National lost multiple MPs to scandal in the run up to the last election, including Andrew Falloon and Hamish Walker. This year, Upper Harbour candidate Jake Bezzant was also the subject of a political scandal.

A report from Party general manager Greg Hamilton said the party was within its budget but had fallen short of fundraising targets. The annual "President's Appeal" raised 8 per cent less than its 2019 target.

Membership was a problem.

Membership has been falling steadily since 2008, when it nudged 30,000 - although there are always peaks in election years.

National's increasingly fractured attitude to Māori was also on display. Party leaders were welcomed into the auditorium with extensive mihi, and kapa haka by Wiri Central Primary.

For all National's bluster over the use of te reo Māori, there was barely any other language spoken for the first half hour of the conference - a relatively long time for any major party conference, not just National.

Kaikoura MP Stuart Smith even tempered some of his earlier comments about forcing a referendum on whether the country should officially be known as Aotearoa as well as New Zealand.

Asked whether the increased use of Aotearoa would destroy the reputation of exports marketed under the New Zealand brand, Smith replied

"In my view it's entirely up to individuals and brands how they decide to market them however they wish to within the law".

The conference will run until Sunday, when it will be announced whether Goodfellow has retained the party presidency.