He made the remarks through an interpreter at the beginning of their bilateral meeting – for which Ardern was half an hour late, apparently delayed by traffic.

The former general created quite a murmur in the New Zealand delegation with his opening remarks.

"There is a particular area that I'd like to raise that is an area for potential co-operation with New Zealand, to learn from New Zealand to add value to agricultural products, in how to advance our food technology, and in how to come up with an appropriate market strategy because New Zealand is a leader in this area as shown by its products which have received renown around the world such as kiwis, dairy products and sheep's placenta cream and we want to add value to our own agricultural products because we have a policy of smart farmers in Thailand right now."

Reporters were ushered out soon afterwards, but spoke to Ardern and Agriculture Minister Damien O'Connor afterwards and they were clearly surprised and amused by it.

Ardern suggested that her host may have been taken by the youthful looks of the delegation.

O'Connor, who has what could be described as rugged good looks, admitted to not only not using the product but not even knowing about it.

"The Prime Minister might use it, I certainly don't."

The cream is billed as reducing the signs of ageing.

O'Connor has been the lead New Zealand minister on RCEP (Regional Comprehensive Economic Partnership) negotiations involving India, the 10 Asean countries, and five others.

Negotiations were due to continue overnight in Bangkok and Ardern reckoned the result would not be known until the end of the East Asia Summit on Monday. 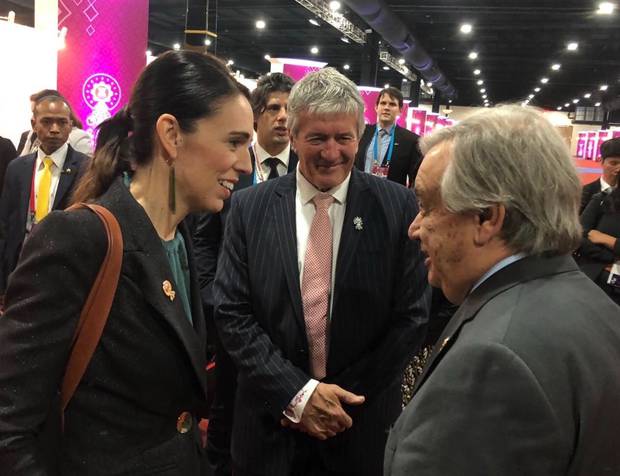 O'Connor is due to visit India straight after Thailand to continue trade talks on the sensitivities around agriculture, particularly dairy.

"India has the biggest dairy industry in the world. They have farmers who have two cows, very sensitive to any impact on their incomes …but what we are offering is technology, us being able to help the Indian industry move up the value chain and we would only ever be targeting the top end of the value chain with our dairy products."

The pair also answered questions about recent comments by New Zealand First minister Shane Jones which have been labelled racist by some Indians.

Jones said Indians complaining about New Zealand's immigration rules requiring couples to have lived together before getting a visa for a spouse "have no legitimate expectations in my view to bring your whole village to New Zealand and if you don't like it and you're threatening to go home, then catch the next flight home."

Ardern said "It is certainly not the position of my party."

He was speaking as a New Zealand First politician, not as a minister.

"I'll be very, very clear – those statements are not ones that I agree with."

In fact Immigration Minister Iain Lees-Galloway has already signalled a back down.

O'Connor said if the issue came up in his visit to India this week "I certainly will be making it clear on behalf of the Prime Minister and our party. We know people will have their opinions from time to time. We are trying to build a strong relationship with India."

Ardern got straight into meetings after a 12-hours of flight from Auckland, also meeting Malaysia Prime Minister Dr Mahathir Mohamad.

And she had an informal chat with UN Secretary General Antonio Guterres who is part of the summit. 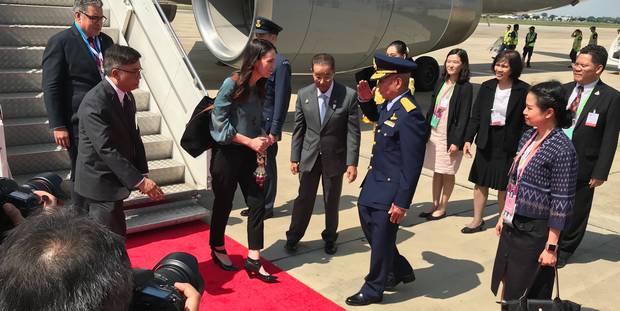 Jacinda Ardern is greeted in Bangkok after a 12-hour flight from Auckland to attend the East Asia Summit. Photo / Audrey Young

She gave a trade speech to an Asean business and investment meeting in one of the cavernous venues at the Impact convention centre in Bangkok although it was half empty.

In just the past two years, new protectionist measures had affected nearly US $1 trillion of global trade.

"Given our shared dependence on trade, and our region's highly integrated supply chains, this is a concern for both New Zealand and Asean.

"We are mindful too, that not everybody has benefited from free trade. Some parts of society miss out on the opportunities trade brings, or have not been able to adapt.

"My Government's view, then, is that there is a need for a more strategic and creative approach to trade policy in times like these."

The East Asia Summit is hosted after the annaul Asean summit of leaders from 10 Southeast Asian countries.