Prime Minister Jacinda Ardern has woken on the first and only day of her whirlwind 25-hour-long visit to Australia, having made a good start to the main objective of her trip: establishing a rapport with new Australian Prime Minister Anthony Albanese.

The pair met for the first time as leaders last night at Albanese's Sydney residence, Kirribilli House, where they had a dinner of kingfish and zucchini noodles with Albanese's family and New Zealand's High Commissioner to Australia Dame Annette King.

They wandered the grounds of Kirribilli House, taking in the view across Sydney Harbour to the Opera House, which was covered in colourful projections for Sydney's annual Vivid light festival. It is one of the first events Albanese has hosted at Kirribilli House, with its former occupant, ex-prime minister Scott Morrison, only moving out late last week.

So pleased to welcome my good friend New Zealand PM @jacindaardern to Australia. I’m looking forward to catching up over dinner. pic.twitter.com/Wilve6Gqn7

The pair are familiar with one another, having met before thanks to the relationship between their sister Labour and Labor parties. Even so, the relationship appeared to get off to a warm start.

Footage of the meeting shot by Australia's Nine News showed Albanese extending his hand to Ardern for a handshake before Ardern went in for a hug. It was almost the exact mirror of a famously awkward hug initiated by former Prime Minister Scott Morrison in the aftermath of the March 15 terror attacks. 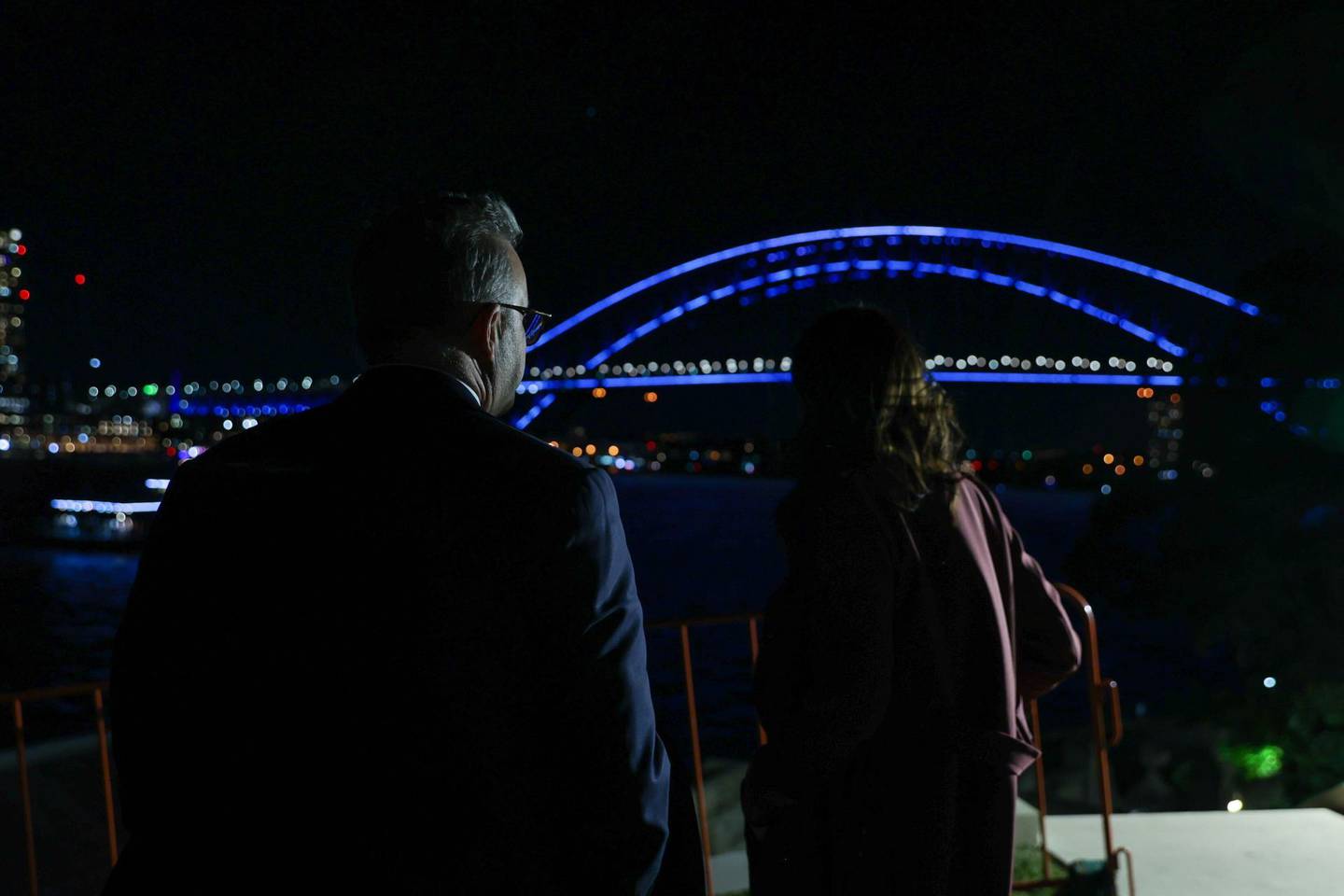 Albanese appeared to be in agreement, saying he too had a "[l]ovely dinner" with Ardern

"I'm looking forward to our bilateral meetings tomorrow where we will discuss all that our countries have in common," he said.

In a previous post, Albanese tweeted that he was "so pleased to welcome" Ardern to Australia, describing her as his "good friend".

They exchanged musically themed gifts. Ardern gave Albanese Aldous Harding, The Clean, Reb Fountain and AK79 albums and two flying nun T-shirts. The gift was a collaboration between Ardern and Deputy Prime Minister Grant Robertson, who is also in Sydney for talks with new Australian Treasurer Jim Chalmers. Robertson sourced the gifts himself.

She'll spend the day in central Sydney in talks with Albanese, where it is hoped a change in government may help her win a modest concession on the issue of 501 deportees.

Australian media have reported Albanese could soften the policy and use any concession to Ardern as a way of resetting relations with New Zealand, which had soured under the previous government. After a brief photo opportunity in the morning, the pair will sit down in private for a bilateral meeting.

Earlier in the week, Ardern foreshadowed a busy agenda for that meeting, which included areas on which the two governments are in alignment like climate change, Pacific foreign policy, and China's growing presence in the region.

But the pair will also thrash out issues upon which Australia and New Zealand do not agree, namely 501 deportations and the rights of New Zealanders living in Australia which compare unfavourably with those of Australians living in New Zealand.

The trip will wrap up in the early afternoon, New Zealand time, with a brief joint media conference before Ardern heads back to New Zealand. 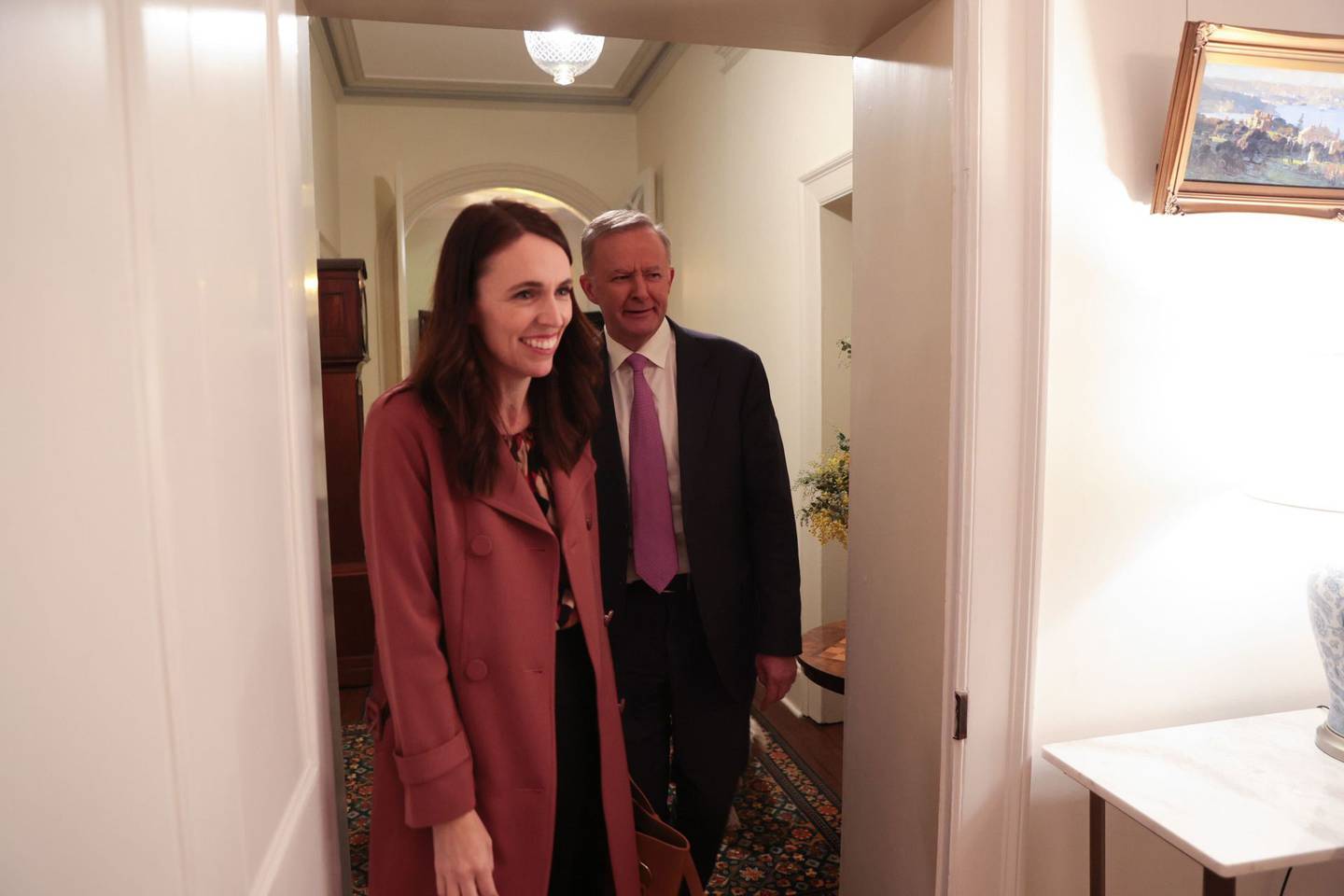 Albanese has pledged to continue with Australia's deportation policy, but Australian media have reported the government could soften rules around the ministerial directions that assist in deciding whether someone will be deported. A change to these rules could mean fewer people who had spent a significant amount of time in Australia would be deported.

Ardern has said she does not dispute Australia's right to have a deportation policy, noting New Zealand also conducts deportations. She does take issue with Australia deporting people with long ties to Australia and little connection with New Zealand.

The fact both parties see deportees with long ties to Australia as an area of potential movement is positive for those hoping for change. The Australian Financial Review reported Albanese could use a change in 501 policy as a way to reset the relationship with New Zealand, which had soured over the issue.

Lovely dinner with @jacindaardern this evening. I’m looking forward to our bilateral meetings tomorrow where we will discuss all that our countries have in common. pic.twitter.com/EZ0tbqXU1H

It's expected the pair will also discuss Australia's new security deal, AUKUS, under which the United States and the United Kingdom agreed to share nuclear-powered submarine information with Australia.

As a non-submarine and non-nuclear power, New Zealand is unlikely to have any major role in the deal, but Ardern will nevertheless want to work out what such a wide-ranging agreement means for New Zealand and the Pacific region - particularly as China interpreted the deal as Ann aggressive move on the part of Australia.

That deal was signed under the leadership of former Australian Prime Minister Scott Morrison.

Leaked accounts of its negotiation, published in the Sydney Morning Herald and The Age show the then Labor opposition was kept in the dark about the deal, against the wishes of the United States.

Although Albanese's Labor government is sticking with the agreement. The extent to which he and Ardern thrash out what the deal means for New Zealand and the Pacific will be significant not just for Ardern, but for Albanese, as it could cast light on what AUKUS means for Australia under his watch.

The pair will also discuss the Indo-Pacific Economic Framework, a light-on-detail trade pact being promoted by United States President Joe Biden as a way of cementing America's economic power in the Indo-Pacific and hedging against a rising China.

The agreement is particularly recent, and both Ardern and Albanese have expressed support for it.