Prime Minister Jacinda Ardern ended her visit to the Nato summit in Madrid warning that the unstable international environment was not limited to Europe - she called out China for its recent challenging of international norms and Russia for its information warfare in the Pacific.

"The shift in environment we are currently seeing is not limited to one region.

"In our neighbourhood, we see the mounting pressure on the international rules-based order. We see attempts to disrupt and destabilise – even New Zealand is targeted by Russian mis- and dis-information," Ardern said.

She added that "China has in recent times also become more assertive and more willing to challenge international rules and norms".

The Nato summit has been dominated by Russia's invasion of Ukraine, but the alliance also discussed a new "Strategic Concept", a document that sets out how Nato sees the world security picture. These are drawn up once every decade, and the new strategic concept, adopted at this summit, includes a strong rebuke of China's assertiveness.

But Ardern also cautioned against the alliance seeing the world in black and white, and oversimplifying a complicated international picture.

She urged members to "resist the temptation to simplify the increasingly complex world in which we live".

The remarks came in Ardern's address to one of the key events of the summit. It was closed to the public, but Ardern released her remarks for publication. 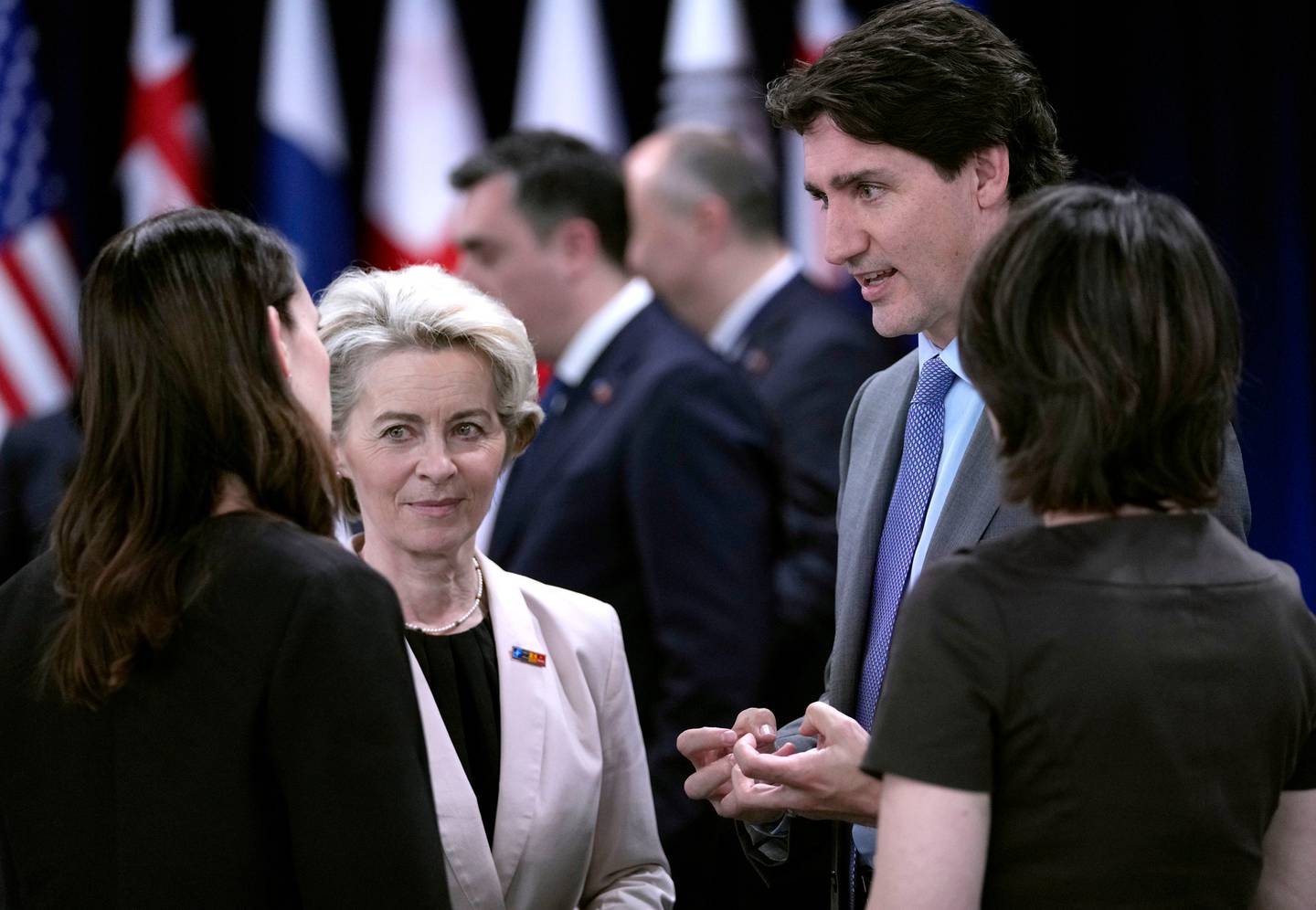 Ardern told the conference that New Zealand had not come to Madrid to "expand our military alliances".

"We are here to contribute to a world that lessens the need for anyone to call on them," she said, adding that New Zealand had a "fiercely held independent foreign policy".

Nato is an alliance of northern hemisphere democracies (although some members have tested that definition). Ardern told the alliance that New Zealand was "one of the oldest and most stable liberal democracies".

But, perhaps mindful of the long, sometimes fruitless wars launched in the name of democracy, or the fact that New Zealand retains good relations with several non-democracies, Ardern said New Zealand's foreign policy interventions were not "based on political ideology, but rather, the simple concept that when our shared humanity is undermined, we all suffer".

Before the speech, Ardern said those particular remarks were actually directed at a domestic New Zealand audience, rather than the Nato members.

"I've seen some of the commentary and the discussion at home. There has been no question from the New Zealand side that we have ever been seeking that, so why have any qualms about restating it," Ardern said.

She said the remarks on China were made in the context of New Zealand having the knowledge to share from the Pacific region.

"As a member of the Pacific region we have a very close watch and we have the ability to observe where we see escalation, and we have seen escalation in our region," Ardern said.

Ardern said she wanted to see de-escalation and diplomacy.

"Rather than heightening, we seek to use diplomacy and dialogue to back the temperature," Ardern said. 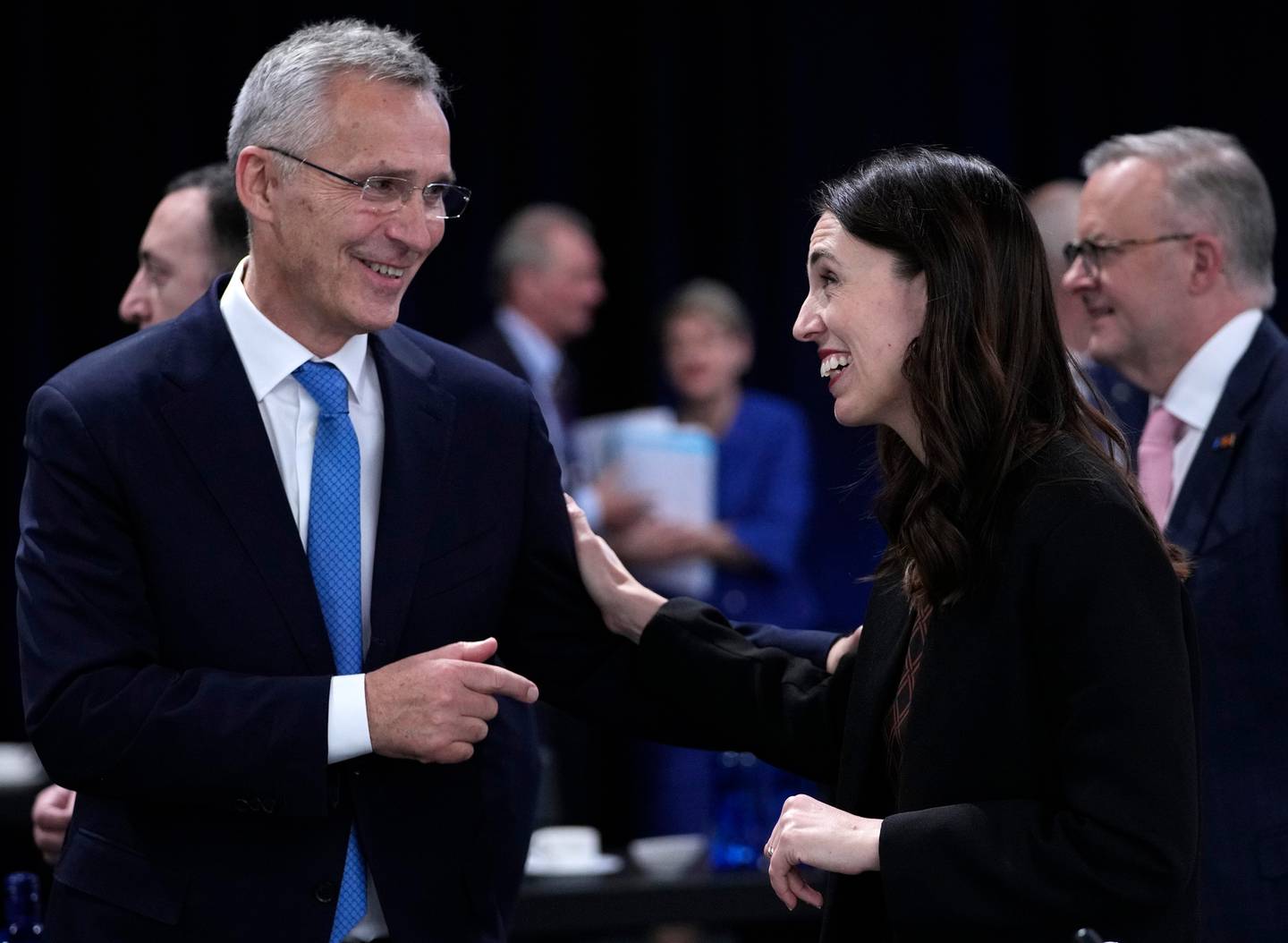 Ardern also came with a "request" of Nato - not to allow the war to trigger an arms race, and to continue progress towards disarmament.

"Our solidarity with Ukraine must be matched by an equal commitment to strengthen international institutions, multilateral forums, and disarmament," Ardern said.

"New Zealand is a Pacific nation. Our region bears the scars of decades of nuclear testing. It was because of these lessons that New Zealand has long declared itself proudly nuclear-free. Some may observe this status and assume us to have the naive privilege of such a position. I would argue, the world can't afford anything less," she said.

Nato's membership includes the likes of the United States, France and the United Kingdom, all of which are nuclear powers.

The war has seen a ratcheting up of tensions in Europe, with the United States announcing during the summit that it would significantly expand its military operations in Europe, adding two additional destroyers to those based in Spain, increasing the number of F-35 jets in the United Kingdom, and bolstering a permanent presence in Poland.

Ardern said the world should "put a halt in the production of weapons that create our mutually assured destruction, because the alternative is unfathomable".

She pointed towards the review conference the Nuclear Non-Proliferation Treaty in August as a time when the world should "send a strong message. Because if not now, when the threat is even greater, then when?"

Ardern is not the only government minister making the case for nuclear disarmament. Phil Twyford was in Europe earlier this month. In a speech earlier then, Twyford bemoaned the fact that "nuclear arsenals are being modernised and expanded, at the cost of billions of dollars".

"Nuclear weapons are immoral and illegal, and their tyranny must end," he said.

The summit also saw Nato pave the way for Sweden and Finland to join the alliance following an agreement with Turkey, which was blocking their addition.

This is likely to further increase tensions with Russia.

Ukrainian President Volodymyr Zelenskyy today appeared at the summit via video link. He made a plea for more modern artillery and weapons.

"We need to break the Russian artillery advantage ... We need much more modern systems, modern artillery," Zelenskyy told the summit.

Zelenskyy also said Russia was financing its war effort with oil and gas exports, and called on members to help Ukraine's effort with financial aid.

"Russia still receives billions every day and spends them on war. We have a multibillion-dollar deficit, we don't have oil and gas to cover it," Zelensky said, adding that Ukraine needs around $5 billion a month for its defence.