The United States has hit out at New Zealand, officially downgrading the country for its weak prison sentences for child sex traffickers and lack of prosecution for labour trafficking.

The Biden administration on Thursday designated 17 countries - mostly authoritarian states - as not doing enough to combat human trafficking and warned them of potential US sanctions.

The administration also called out several US allies and friends, including New Zealand, Israel, Norway, Portugal and Turkey, for backsliding in their efforts, downgraded from the top Tier 1 category to Tier 2.

That means they don't meet international standards for fighting trafficking but are making significant efforts to do so. No penalties are attached to a Tier 2 designation.

Immigration Minister Kris Faafoi said it was "disappointing" to be downgraded, and the Government would be reviewing the report and considering what changes were needed.

The designations came in the State Department's annual "Trafficking in Persons" report, which cited the coronavirus pandemic as a cause for a surge in human slavery between 2020 and 2021.

The report covering 188 nations and territories said the outbreak had put millions more people at risk for exploitation and distracted some governments from efforts to stem human trafficking.

The report cited New Zealand for not initiating any prosecutions for labour trafficking and weak prison sentences for child sex traffickers that "significantly weakened deterrence, undercut efforts to hold traffickers accountable, and did not adequately address the nature of the crime".

Faafoi said New Zealand was committed to eliminating people trafficking, and had developed a Plan of Action against Forced Labour, People Trafficking and Slavery to be implemented over five years.

The Trafficking In People report ranked countries based on the domestic legislation applied in the United States, while circumstances differed country to country, he said.

The measure of showing an increased number of trafficking prosecutions was "problematic" for New Zealand and other countries with small population sizes as, combined with the long duration of trafficking investigations, it meant prosecutions varied significantly year to year, Faafoi said.

Despite this, there had been some success, Faafoi said.

In 2020 Hawke's Bay man Joseph Matamata was sentenced to 11 years in prison and ordered to pay $183,000 in reparations for trafficking and slavery. Matamata has appealed.

The Government had also invested $50m over four years in ending migrant exploitation.

"While not all victims of people trafficking are migrants, we acknowledge that migrants are particularly vulnerable," Faafoi said.

The report classified 17 mostly authoritarian nations as "Tier 3" for failing to meet minimal standards to stop what Secretary of State Antony Blinken called an "inhumane cycle of discrimination and injustices".

The designation means that without a presidential waiver those countries could lose some US assistance, although decisions on such penalties will not be made until later this year.

Newcomers to the Tier 3 category are Malaysia and Guinea-Bissau, both of which had been on a watchlist for a downgrade for three years and were ineligible to avoid the designation because they had failed to take steps to improve their anti-human trafficking efforts.

They join Afghanistan, Algeria, Burma, China, Comoros, Cuba, Eritrea, Iran, Nicaragua, North Korea, Russia, South Sudan, Syria, Turkmenistan and Venezuela in the worst offender category. Most of those countries are already subject to US sanctions for other reasons. 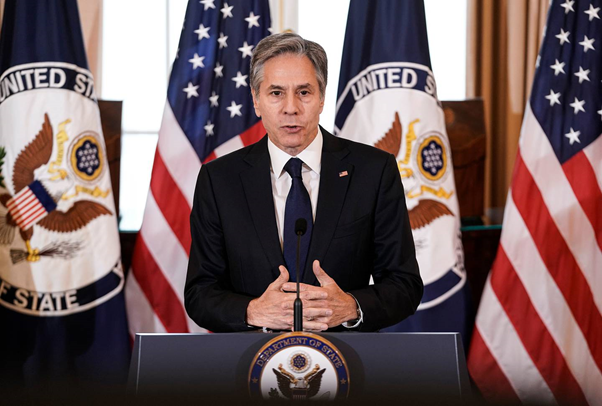 Secretary of State Antony Blinken speaks about the release of the State Department's 'Trafficking in Persons' report. Photo / AP

Israel, also downgraded to Tier 2, was cited for backsliding on "serious and sustained" initiatives to combat trafficking, including a decrease in investigations and prosecutions of perpetrators, and severe understaffing at its only authority directly charged with dealing with the matter.

The report criticised NATO ally Norway for not prosecuting any human trafficking cases during the reporting period and charging people suspected of the crime with lesser offences.

And, in the first such criticism of a NATO ally, Turkey was specifically cited for providing "operational, equipment, and financial support" to an armed militia in Syria that recruits child soldiers. Turkey and 14 other nations, including Afghanistan and Pakistan, were hit with the same designation, which can result in the loss of US military training assistance.