Green Party co-leader James Shaw has apologised for an attack ad which took aim at the National Party after a wave of criticisms from the Greens' own members.

The ad has been taken down amid criticism the Greens were mocking National Leader Simon Bridges' accent.

Speaking to media after the ad was pulled, Shaw said the Greens were trying to use satire to make a point about the use of National's attack ads.

He said the party "took a risk".

"We thought it was acceptable but we have got some feedback from our members and supporters – we do listen to them – and that's why we pulled it."

He said his intention was never to mock Bridges' accent but, rather, National's use of negative ads.

"I know a number of our members and supporters have said they were offended we were mocking his accent – I have said that was never the intention and so I do apologise."

The ad triggering a stream of criticism and forcing the party to take it down and apologise.

And some of the criticism came from Green Party members, including the party's former director of communications and policy David Cormack, who called it "classist bulls**t". 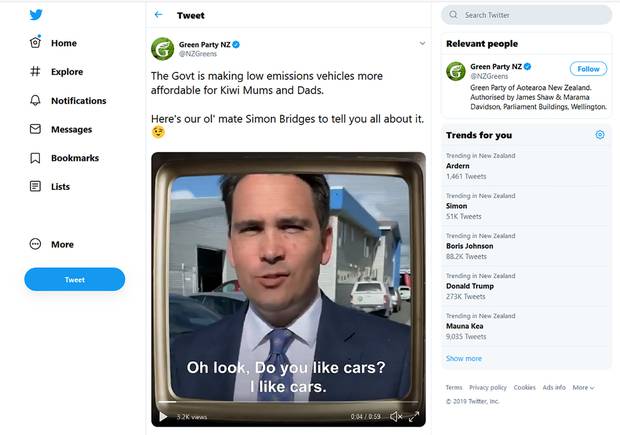 The stinging comments hit home immediately, and the party removed the ad and apologised within two hours of the ad being published.

The video, released on social media at 1.15pm, showed an old video of Bridges walking through a car yard. It features an exaggerated voice-over mocking National's approach to EVs.

Bridges was voiced by comedian Tom Sainsbury who has posted various parody videos mocking both the National leader and deputy leader Paula Bennett.

Although Bridges said he found the ad to be "pretty funny," he said that a lot of other people did not.

That Green Party video mocking Simon's accent isn't cool. As I've said, that's classist bullshit. There's plenty of things to ridicule him for, that's not one.

"The reality is we [National] are holding the Government to account on their taxing of New Zealanders – they want to hold me to account on my accent."

The ad has been slammed by various people, with Cormack saying: "There are plenty of things to ridicule him for, that's not one."

Another Twitter user said the ad was hypocritical, given the Greens focus on kindness in the past.

Political commentator Morgan Godfery said: "I predict a record-breaking backdown and apology on this."

i predict a record breaking back down and apology on this https://t.co/3SKH5sfTEa

"I thought it was quite funny," Davidson said.

She said the video was not about mocking Bridges' accent, rather highlighting National's inaction on climate change.

"I think it's really important to continue to speak the truth about the Nats continuing to oppose taking real action on climate change."

Shaw said National's spreading of "misinformation" about the Government's EV policy was unacceptable.

He said the video's intention was not to mock Bridges accent, and they had to hire an actor who could "accurately depict his accent".

"I actually did have a think about what it would be like if you got someone who couldn't accurately portray that accent."

But the ad was taken down just before 3pm.

To our supporters: we heard you, and we’ve deleted the post and apologise for causing offence.

"It's been raised that a video that we made using satire to poke fun at another political party's attack ads was of poor taste and lowered the tone of the debate," the party's Twitter feed said.

"We were using satire to call attention to that but obviously, it's landed poorly. To our supporters: we heard you, and we've deleted the post and apologise for causing offence."

Shaw said after the ad was pulled: "Explaining, as they say, is losing. And if you have to explain the joke, it clearly wasn't as funny as you thought it was."