Moore was at his home in Auckland when he died, his wife Yvonne said.

Moore, who was the country's 34th Prime Minister, suffered a stroke in 2015 when he was New Zealand's ambassador in Washington DC and had been in declining health in recent years.

Mrs Moore said her husband had numerous health issues since his stroke.

"Mike was born in Whakatane but grew up in Kawakawa and Moerewa in the Far North and wanted to spend his final months in the place that gave him his drive, spirit and courage," she said.

"Mike wanted to be in Northland one last time so he spent much of summer in Matauri Bay and only came back to Auckland in recent weeks because of his health.

"Northland made him the battler and fighter for ordinary Kiwis he was throughout his life and career and that was what drove him to become a member of the New Zealand Labour Party at 16-years-old. He was stubborn, optimistic, generous and kind."

Mike Moore became the Prime Minister for 59 days before the October 1990 general election.

Following Labour's defeat in that election, Moore served as Leader of the Opposition until the 1993 election, after which Helen Clark successfully challenged him for the Labour Party leadership.

Following his retirement from New Zealand politics, Moore was the Director-General of the World Trade Organisation from 1999 to 2002. He has also held the post of New Zealand Ambassador to the United States from 2010 to 2015.

Moore was first elected to the Auckland seat of Eden in 1972, the youngest MP at 23 years old. 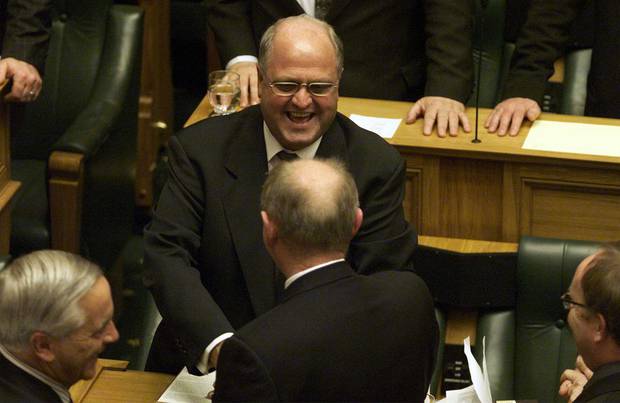 Mike Moore is congratulated after delivering his valedictory speech in the House in 1999. Photo / NZ Herald

He held the seat for one term and was defeated in the Rob Muldoon landslide victory in 1975. Soon after, he had the first of his three bouts of cancer.

In 1978 he was elected to the Christchurch seat of Papanui, defeating National Cabinet Minister Bert Walker. He held that seat, which later became Christchurch North and Waimakariri, until his retirement from Parliament in 1999.

Mrs Moore said her husband had an ability to connect with people from all walks of life.

"Having left school at 15 for a job in the freezing works, Mike always believed that his love of reading and hard work would overcome his lack of formal education.

"Mike was always a good reminder to the Labour Party of its working class roots and will probably be its last blue collar Prime Minister.

"Mike was a passionate believer in the power of government to advance people through the collective provision of health and education and how that was the ladder up for ordinary working men and women and their families."

She said that in keeping with Labour's traditions he was a committed internationalist.

I mourn the passing of Mike Moore, and my heart goes out to Yvonne and the family. He always showed me kindness, offered support, and loved a good discussion/debate. He was a fiercely proud Kiwi who represented us with distinction on the world stage. Rest easy now Mike.

"As Trade Minister he helped give New Zealand a confident outward view of itself in the world. He also came to believe in the power of a rules based global trading system and how that, more than international aid, could lift nations out of poverty. He was a great humanist and a passionate free trader.

"He enjoyed being a representative Parliamentarian, doing electorate clinics at the weekends, and during the week debating issues and legislation in the House. It was in the debating chamber that he felt at home most because he knew his humour, quick wit and well-read knowledge would set him apart from many others."

In recent years one of his greatest fears was that he'd die before seeing another Labour Government.

"He was elated when Jacinda Ardern became Prime Minister and thinks she's extraordinarily gifted and has the potential to achieve more for New Zealand and on the international stage than any other Labour leader."