Media staff for the Australian Border Force ignored the privacy of 501 deportees by providing their names to a Channel 9 journalist, leading to the "taking the trash out" broadcast that soured trans-Tasman relations.

An email to the journalist from the Australian Border Force media unit listed the names and convictions of five New Zealanders being deported and provided video footage that showed their faces.

It did so a day after telling officials the deportees' names would not be released, prompting one Australian senator to say emails obtained by the Herald revealed a "stitch-up".

The information in the emails formed a substantive part of a March 8 news report by Channel 9. Journalist Jordan Fabris harangued deportees as they were escorted in handcuffs to a passenger jet on the runway at Brisbane Airport. The broadcast also used the Australian Border Force video footage without identifying it as the source with Fabris naming the deportees as they were led to waiting aircraft. One of the New Zealand citizens captured in video shot by Australian Border Force and supplied to Channel 9. (Photo / Supplied)

It featured then Home Affairs Minister Peter Dutton who said: "It's taking the trash out, then we can make Australia a safer place." The comments sparked a backlash in New Zealand with one politician saying transtasman relations had fallen to a low not seen for 40 years.

The Herald obtained correspondence between Australia's Department of Home Affairs and Channel 9 through the country's Freedom of Information laws.

No further information was provided until March 3 when ABF's media unit sent a briefing email to 16 email addresses alerting recipients to a media release on 501 deportations, intended for release after the Channel 9 story was broadcast. 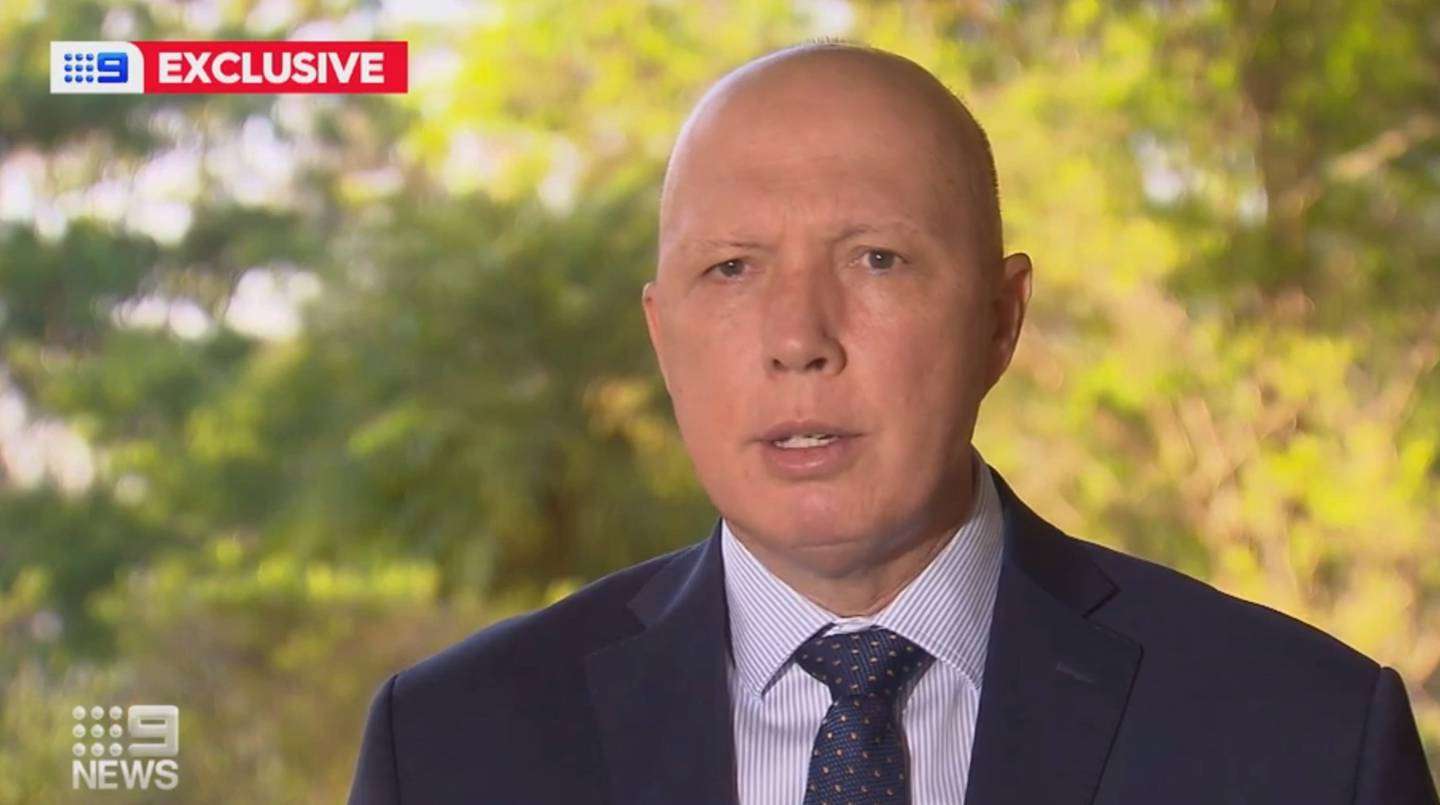 The email included a copy of a media release and links to three video files - two from February 16 filmed in Sydney and Perth and another from Sydney filmed on February 17. The video files blur the faces of Border Force staff but show the faces of the deported New Zealanders.

The ABF media unit email stated: "As requested, we have maintained the facial identities of the detainees whose cases are on the public record through the media, although we have not identified them in the media release."

The ABF media unit sent the media release and video links to Channel 9 on March 4 in an email that said: "To help with your story, I have also outlined below who it is you can see in the vision."

The ABF media email then listed the names and convictions of five people in the provided video who were deported on the February 16 and 17 flights from Sydney. Channel 9's story did not state that the video had been provided by the ABF.

The email chain released to the Herald through Australia's Freedom of Information legislation did not list the names, which were redacted. 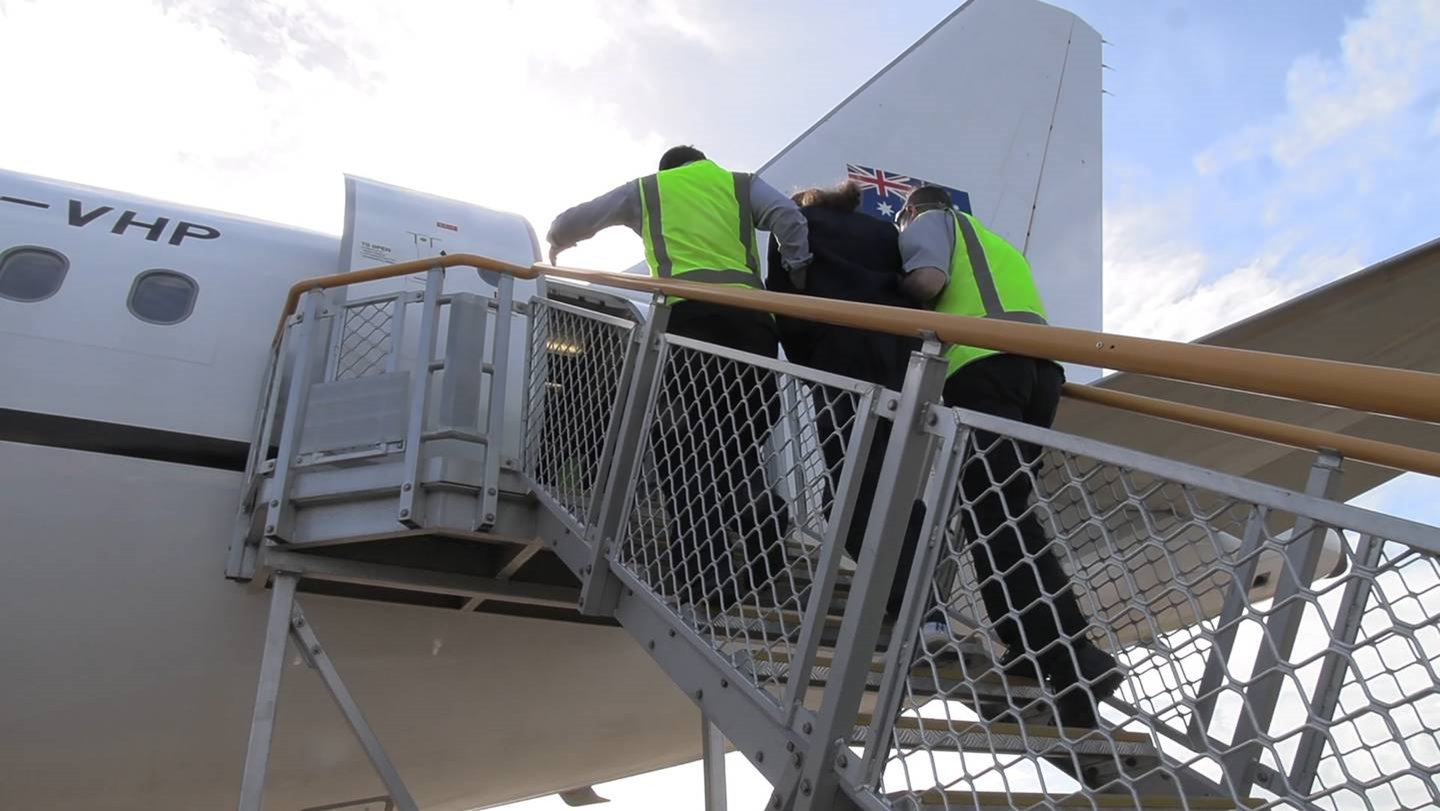 A deportee put a repatriation flight from Sydney to New Zealand in video shot by the Australia Department of Home Affairs. (Photo / Supplied)

The letter accompanying the FOI correspondence, signed by the ABF media manager Hamish Walker, said the names were withheld for privacy reasons. He said releasing the names - as the ABF did to Channel 9 - would be an "unreasonable disclosure of personal information".

Walker also stated: "It is firmly in the public interest that the department uphold the rights of individuals to their own privacy and meets its obligations under the Privacy Act.

"I consider that non-compliance with the Department's statutory obligations concerning the protection of personal information would be contrary to the public interest and that this factor weighs strongly against disclosure."

After the Channel 9 broadcast, ABF Commissioner Michael Outram was grilled at an Australian parliamentary committee about the presence of Fabris on the runway. He said: "I would say it was a one-off incident where a fairly inexperienced officer gave permission for something to happen that I would prefer had not happened".

One of the senators that grilled Outram, Greens spokesman for immigration and citizenship Nick McKim told the Herald the email trail showed the Channel 9 story wasn't just the work of a "junior media officer". Channel 9 reporter Jordan Fabris thrust a microphone in the faces of New Zealand citizens being deported from Australia. (Photo / Supplied)

"Far from just the actions of a junior media officer, the emails show that this was worked on by multiple officers across the department. It was an institutional stitch-up.

"The department owed these people a duty of care and has been caught out egregiously and wilfully breaching their privacy."

A spokesman for ABF media said it complied with its Privacy Act obligations but did not respond when asked why Channel 9 received names considered an "unreasonable disclosure" through the FOI.

The spokesman said publicity around deportations had a deterrent effect showing those who weren't citizens that they could be deported if engaged in criminal acts.

Fabris did not respond to a request for comment. Channel 9 has been approached.

Moana Taverio's son Tangaru Noere Turia was deported last year and shot dead by police in late February. Turia had lived in Australia since he was 6 months old and deported with mental health issues his mother said made it difficult to integrate with New Zealand.

She watched the Channel 9 broadcast less than a fortnight after he died and found it deeply upsetting that Dutton would refer to her son as "trash".

"These people have parents, they have families. You wouldn't want your children to be called trash. It's so wrong. Why would they talk about a human being like that?" Footage of a deportation flight filmed by Australian Border Force and supplied to Channel 9. (Photo / Supplied)

Auckland University of Technology head of journalism Dr Greg Treadwell reviewed the email trail and described it as a "far-too-friendly alliance".

"If people are concerned about journalism being too chummy with government and its agendas, this isn't a bad example."

Between January 2019 and March 2021, 598 New Zealanders were deported under the "501" law. That number makes up about a third of all those kicked out of Australia.

Dutton, who is now Minister of Defence, did not respond to a request for an interview.

Australian deportees have arrived in NZ and will be held in a Central Auckland isolation facility for 14 days. Video / Dean Purcell / Nick Winter