A top Covid modeller says New Zealand's fight against Delta has exceeded expectations - and there are positive signs we will eliminate it in the coming weeks.

"Some time over the next couple of weeks, we will eliminate it," says University of Auckland Covid-19 modeller Shaun Hendy.

He told TVNZ's Breakfast that the system and people working on the frontline - essential workers and medical staff carrying out Covid tests, for example - had done "an incredible job" that was now reeling in results.

He said it was "certainly possible" that Auckland could drop down to level 3 as early as next week.

New Zealand was seeing the tail-end of this current Covid outbreak, he said.

He acknowledged that even he was surprised - as were other Covid modelling experts - at the positive signs that New Zealand was about to eliminate Covid in the community again.

Meanwhile, achieving the highest possible vaccination rate is "absolutely critical" to any plans to start reopening the borders, says a public health expert.

That task is due to become easier this morning when an extra 250,000 Pfizer vaccines are due to arrive from Spain, followed by an even larger shipment due next week from a different country.

The extra supplies are in addition to the 10 million originally purchased directly from Pfizer.

Professor Nikki Turner said the extra vaccinations mean we can now keep up with the surging demand that's been created since Delta arrived in the country.

"We really have the wind in our sails now," said Turner, who is the Director of the Immunisation Advisory Centre at the University of Auckland.

"It would really have been disappointing if we had to put the brakes on the programme now, as it has such momentum."

The extra supplies mean the rollout, which has been operating at close to double the original plan since the outbreak, won't need to slow down before the largest shipments - about 4 million doses - arrived in October.

Turner said achieving the highest rates possible of vaccination was "absolutely critical" to any plans to start reopening the borders.

She said reopening would inevitably see more infections in the community, so having high vaccination rates would reduce the impacts dramatically and demand on emergency services.

"The data is very clear now that the vaccine we are using remains highly effective against severe disease and death from the Delta variant, somewhat less effective against mild and non-symptomatic disease, but still with some effect."

Ardern yesterday rejected any suggestions that a plan to reopen the border next year, announced just prior to the country going into lockdown, was now in question due to the current outbreak.

That plan opens up certain travel options for fully-vaccinated people, while those unvaccinated would still need to go through MIQ. 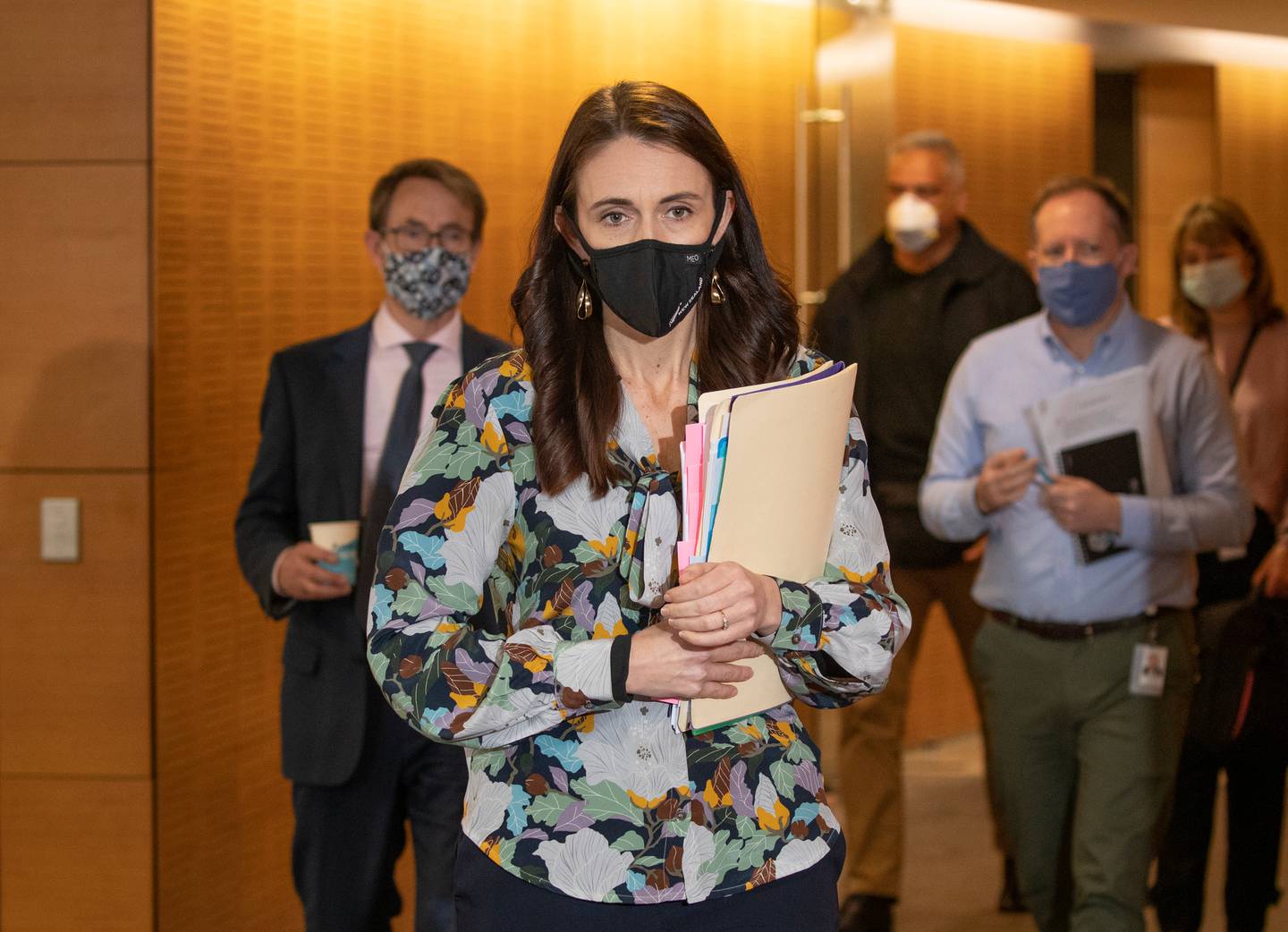 Jacinda Ardern said the deal with Spain was a straight purchase, with no swaps involved as other countries had negotiated. Photo / Pool

Travel options for those without vaccinations is looking to become increasingly limited with Qantas yesterday announcing it would only allow people who have had both jabs to fly.

Opposition parties National and Act have welcomed the news of extra vaccine supplies, but yesterday questioned why such a deal and scale-up of the rollout could not have occurred sooner.

Ardern said the deal with Spain was a straight purchase, with no swaps involved as other countries had negotiated.

While Ardern said she would not reveal the price she said it came with "no premium" compared to purchasing straight from Pfizer. Another, "much larger", shipment would be announced next week from a different country, Ardern said.

The extra doses were needed because of an unexpected surge in demand for vaccinations following the recent Delta outbreak, which Ardern said they did not want to see slide.

Forecast supply would have enabled about 50,000 vaccinations a day through September, but demand in recent weeks has been nearing 90,000 at times, and averaging over 500,000 a week.

This had seen daily vaccination rates here surpass those of countries including Canada and the United Kingdom at their peaks.

As of yesterday 33 per cent of eligible people in New Zealand were fully vaccinated, 64 per cent had one dose and 75 per cent at least one dose or booked in for one.

Of the 88 people who have needed hospital care in the current outbreak, only was fully vaccinated and 15 have had one dose.

But when a two week gap since receiving a jab was taken into account, none of the fully vaccinated cases and only four people with one dose have been hospitalised.

That means 84 out of the 88 cases in hospital - or 95 per cent - had not had a single dose of the Pfizer vaccine more than two weeks before testing positive.

With vaccine manufacturers at capacity and supplies all bought up, countries with larger supplies recently have been trading, selling and donating to others that could be in greater need.

Ardern has said our excess would go to Pacific neighbours, while Spain has started to deliver on its promise to donate 22.5 million doses to countries in Latin America and Africa.

Turner said while this process of wealthy countries swapping vaccines could pose ethical questions, it in many ways reflected the inequity of the world already existing.

"It is great to see countries sharing. But I think the world and New Zealand really needs to think hard about how it can better support countries that are not as fortunate as to be able to simply buy vaccines."

At home Turner said with supplies needed and momentum the challenge was to ensure all communities were reached.

"Particularly to support those who may have a range of barriers and concerns around vaccination."

She said managing supply and demand was a complicated process and the recent Delta outbreak could be credited directly with a surge in demand and urgency.

Prior to the latest outbreak she said the country was getting a little complacent.

"I think this has shaken us all up and shown how easy Delta can get in here and how infectious it is."

Along with the Delta scare, Turner said there had been some "amazing" and "creative" programmes launched to boost vaccination rates including drive-through operations and Māori and Pacific-led clinics.

"Obviously it would have been great to have this happen earlier, but on the other side because of this outbreak people really are more aware and keen to be vaccinated so the high demand is there."

Turner said clinical trials were currently under way on the Pfizer vaccine for those aged 5 to 12 and those under 5, with results expected by the end of the year.

While important and given the scale of outbreaks children were being affected, the health risks were still regarded as much lower than older age groups, she said.

Meanwhile there were just 13 community cases announced on Thursday, all in Auckland, and continuing a downward trend over the past several days.

Director general of health Dr Ashley Bloomfield said that was helping to give the confidence the spread was restrained.

Cabinet will decide on Monday if the outbreak is under control enough to move Auckland down alert levels.