A 12,000-strong petition has been delivered to Parliament demanding recognition for New Zealanders claiming they have been injured by the Covid-19 vaccine.

Around 100 people from the group "Silent no More" gathered in Civic Square this morning for a memorial before marching the petition to Parliament.

While the group did not enter the Parliament forecourt, they were met on the steps by National MP Chris Penk who had been informed of the petition by a constituent, who was a member of the group.

Rob Martin, 51, said it was the first time he had felt heard by politicians regarding the Covid-19 vaccine.

"After all the protests that have happened, this is the first time that someone's acknowledged. That's what we're here for, recognition and for our voices to be heard." 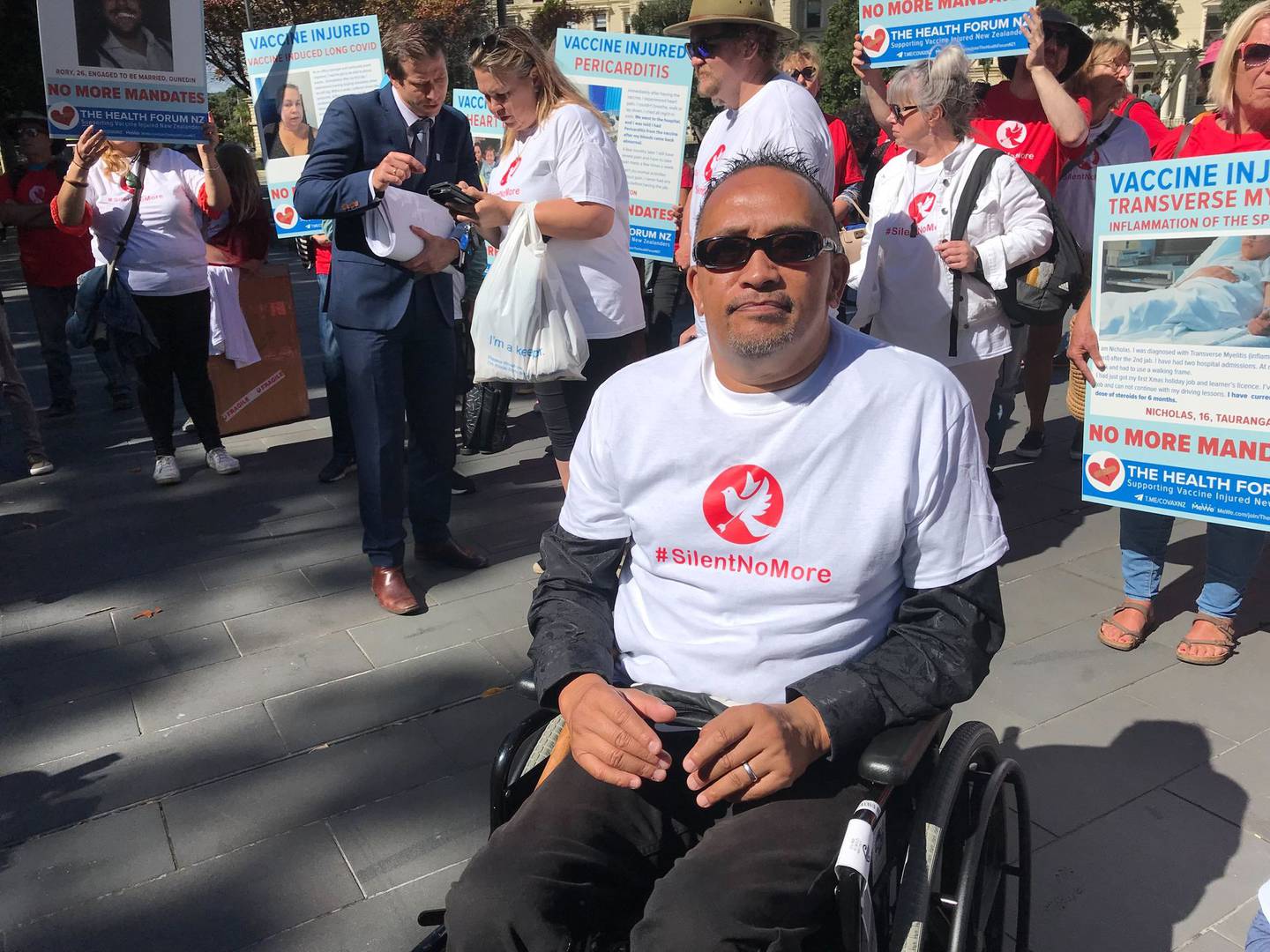 The change.org petition is calling for any adverse reactions to the Covid-19 vaccine reported to CARM (Centre for Adverse Reaction Monitoring site) to be investigated as "legitimate vaccine injuries and treated as such until conclusively proven otherwise".

Up to February 28, there were 58,135 reactions that had been reported to CARM, the great majority minor side effects.

Martin, who had travelled from Auckland to help deliver the petition, claimed during the memorial service that he had suffered from anxiety and a stroke after receiving the second Pfizer shot.

He said the petition was mostly about receiving recognition.

"And I know people that are too shy to speak. My role now is to help them open up." 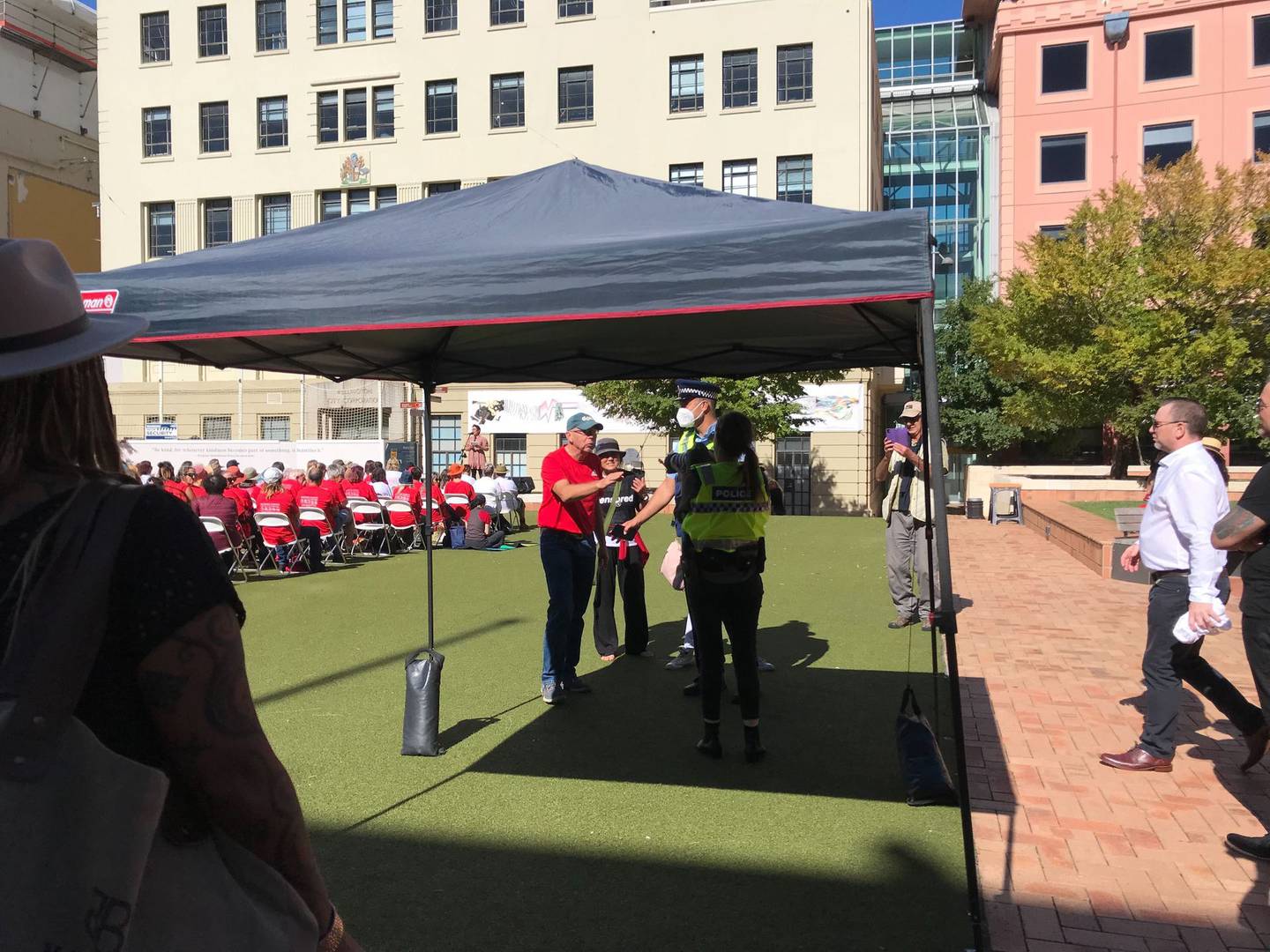 Police were in attendance and filming parts of the memorial service. Photo / Sophie Trigger

Otago University Immunologist and microbiologist Associate Professor James Ussher said the Covid-19 vaccine was one of the best-studied vaccines available.

"Data from over a billion vaccines doses is available, with close monitoring for adverse reactions," he said.

"We can assure people that Pfizer vaccine is very safe."

Risk of allergic reaction or myocarditis was around one in 100,000, and he said there was no reported association with seizures or strokes.

"Stroke and heart attacks have been associated with Covid infection, but not with the Covid vaccine.

"When you're rolling a vaccine out across a whole population, medical events are occurring the whole time and things will happen by coincidence." MP for Kaipara ki Mahurangi Chris Penk received the petition and thanked the attendees for coming.

"My local constituent asked me to receive this petition on your behalf.

"And for me as a local member of Parliament, my duty is to represent my electorate, and that means honouring democracy and the law of the people …

"I thank my constituent for reaching out to me and giving me the opportunity to say that I will, as a representative, work for the area in which you are a voter and a resident, that I be happy to take the words that you have said to Parliament."

Attendees said the memorial service earlier in the day was an opportunity to "honour and grieve" those who had been affected by the Covid-19 vaccine.

Police were filming speeches and proceedings at the memorial, which caused several outbursts, with one attendee telling the policewoman angrily to "show some respect".

At least three police officers were present at the memorial and later escorted the group to Parliament.

Police said there were no issues reported.