KEY POINTS: • The cost-of-living package – and what's in it for you • An emergency $1 billion cost-of-living package, giving a one-off payment of $350 to 2.1 million people. The package also extends the 25c a litre fuel tax cut and half-price public transport for another two months • An $8 billion increase in health spending, including $71m for Pharmac to buy more cancer drugs and more money for ambulances and rebuilding run-down hospitals • Schools get $777m in capital investment for new classrooms and the decile system will be scrapped • $200m towards the first stages of the light rail project in Auckland, feasibility studies for a new port in Manukau Harbour and for a dry dock at Northland's Northport • Premium: Audrey Young's analysis - Grant Robertson's Goldilocks Budget not too little, not too much • Inflation forecast to peak around 6.9 per cent in the middle of this year – but dropping to below 3 per cent by 2026

Finance Minister Grant Robertson has tacked to the centre, bolting an emergency $1 billion cost-of-living package to his $5.9b health-focused Budget, which was already the largest allocation of new spending.

That money will go towards cash payments of $350 for more than 2 million people.

The Budget's relative largesse is on display in almost every portfolio. Health is the big winner, but Robertson addressed inflation-induced cost pressures across the public sector.

But Opposition MPs are not holding back in their disdain for Budget 2022, with National labelling it "backwards" and Act the "brain-drain Budget".

The Budget funded everything from early investigations of the future unemployment insurance scheme to light rail in Auckland and a new port in the Manukau harbour. There are small sums for scraping the hulls of ships for biosecurity reasons, more for labelling DVDs, and some for assisting Vietnam veterans. There's even money for starting to build the new Parliament buildings, which will help cater to the overflowing Parliamentary precinct and boost security.

But the cost-of-living crisis is front and centre. From August 1, the Government will offer middle-income earners a one-off payment of $350, handed out in installments over three months.

The payments are targeted at people who earn less than $70,000 and do not receive the winter energy payment. The Government reckons about 2.1 million New Zealanders will qualify.

It's extending the 25c a litre fuel tax and road user charge cut for a further two months, costing $235m. That is being paired with a two-month extension to the half-price public transport scheme at a cost of $132m. Wasting no time, the Government will go to war with the supermarket duopoly tonight, putting the House into urgency to progress legislation blocking supermarket chains from using covenants to block new entrants into the market – a recommendation made by the Commerce Commission's market study.

The package is clearly aimed at the National Party, which had been goading the Government to implement a $1.7b tax cut package to alleviate the cost-of-living crisis.

National had also been challenging the Government to find savings in existing spending. The Government responded today, publishing about $500m in savings.

Robertson said he would not "consider" reducing public services in light of inflation saying it "will not reduce the prices Kiwis are facing at the pump or in the supermarket, it will only undermine the wellbeing and security of our people".

The billion-dollar price tag for those items comes from the $61.6b Covid-19 fund, which Robertson announced would be wound up. There was $3.2b left in the fund as of April - that money will be spent on the cost-of-living package, leaving $1.2b set aside for further Covid-related problems that might crop up in the next year.

The Government hopes the scheme need only be short-term. Forecasts released by Treasury on Budget day back that up - but only partly. Inflation is expected to ease in the future, but it won't be until the middle of the decade that it nears anything like normal levels.

CPI inflation is expected to remain at 6.7 per cent this year (it is 6.9 per cent currently), and drop to 5.2 per cent next year, and 3.6 per cent the year after. It is only in 2025 that inflation returns to the Reserve Bank's target range of 1-3 per cent. All of those figures are about a percentage point higher than forecast in December.

There is a light spot however – wages are expected to surge by 6 per cent next year, and grow again by 6.1 per cent the year after and by 5.4 per cent in 2025. This will mean that in future years, both wages and benefits (which are pegged to wages), will rise higher than inflation.

GDP growth is sluggish over the next half decade - with a GDP per capita recession forecast in 2024 (the economy as a whole grows that year - just not as fast as the population).

In December, Robertson said the Budget would be a health budget – and he did not disappoint. In 2019, before the pandemic, New Zealand spent about $18b on the health sector. This has been expanded by more than a quarter. The health sector will now spend about $26b a year as of next year.

The new health agency, Health NZ, which replaces DHBs, will get new spending of $1.8b to wipe the slate of deficits in its first year, and get a further $1.3b in year two.

Health Minister Andrew Little said the funding "clears the financial deck so Health New Zealand and the Māori Health Authority can have a clean start".

The Budget allocated about $11b over multiple years to the health sector.

Pharmac is the big winner with the biggest-ever increase to the drug-buying agency's medicines budget. It gets $71m additional funding this year, and $120m next year, taking the annual budget to $1.2b.

Little said Pharmac had assured him it would use the funding ot "secure as many medicines… as it can" from its investment list published last year. He said the focus would be on cancer medicines.

The Budget would buy 61 new emergency vehicles, 48 of them ambulances, and pay for 248 more paramedics and frontline staff. That comes at a cost of $166.1m over four years.

There was also $1.2b in capital investment for rebuilding hospitals in Whangārei, Nelson, and Hillmorton.

A further $90.7m over four years would go towards air ambulance services.

Another $102m over four years would improve community healthcare, and $86m over the same period would go to GPs in high-needs areas to extend open hours and offer more appointments.

The Māori Health Authority got its first round of funding, receiving $168m for the direct commissioning of health services for Māori.

There will also be $20.1m for Iwi-Māori Partnership Boards, and $30m to support Māori and primary community care providers.

Associate Minister of Health Peeni Henare said the boards would "assess the health services Māori and whānau need at a local level, and the funding provided to the Māori Health Authority will then be able to pay for the services to meet those needs".

Transgender and intersex health will get a small funding boost. About half a million dollars a year will go to providing more gender transition services, and improving guidelines for gender affirmation procedures. About $700m a year will go to implementing a "rights-based" approach to intersex care.

Some of that will go to building a further 280 classrooms at more than 40 schools. There will be $105m to purchase new classrooms and build sites for kura and $88m will go to the Christchurch School Rebuild programme, which continues to rebuild schools damaged in the city's earthquake a decade ago.

The Government will move ahead with its plan to scrap the decile funding system for schools, costing $300m.

Hipkins said this would include "$75m per year in additional equity funding for schools with higher levels of socio-economic need".

He said the funding would help the Government "make similar changes for early learning" in the future.

"The funding rate increases across the system make up a significant investment of over $750m, going directly to education providers to support them to meet rising costs," Hipkins said.

The Government is rolling out a two-pronged housing strategy, loosening criteria for first-home buyers to get government assistance for first-home grants and removing all price criteria to apply for first home loans.

It is not clear whether that funding will deliver additional public homes. It appears much could be absorbed by cost pressures in the construction sector. 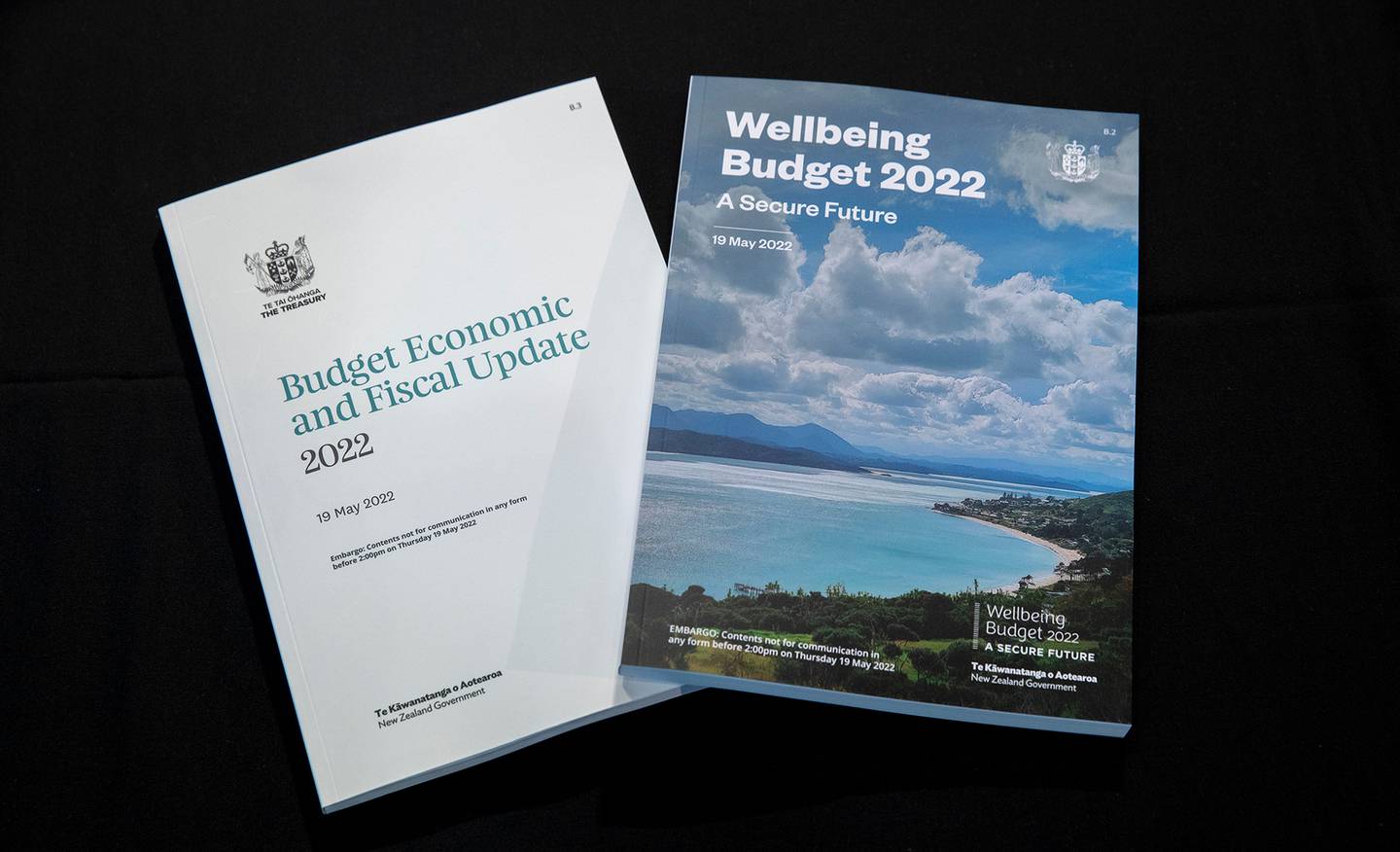 Housing Minister Megan Woods said the funding "reflects our Government's commitment to meeting the ongoing costs of providing public housing, as we rebuild the state's role in this sector".

"Bringing on the largest boost to public housing since the 1970s does not stop at the capital cost of additional homes; ongoing operational funding for Income Related Rent Subsidies is a key part of sustaining those tenancies," Woods said.

First-home buyers will find it easier to access first-home grants in major cities with price caps in Auckland lifted to $875,000 for existing and new properties (up from $625,000 and $700,000 respectively).

"For decades, beneficiary sole parents have been denied money that is rightfully theirs by an outdated rule that has seen the Crown retain their Child Support payments," Ardern said.

The rules will give child support to sole-parent beneficiaries as income. 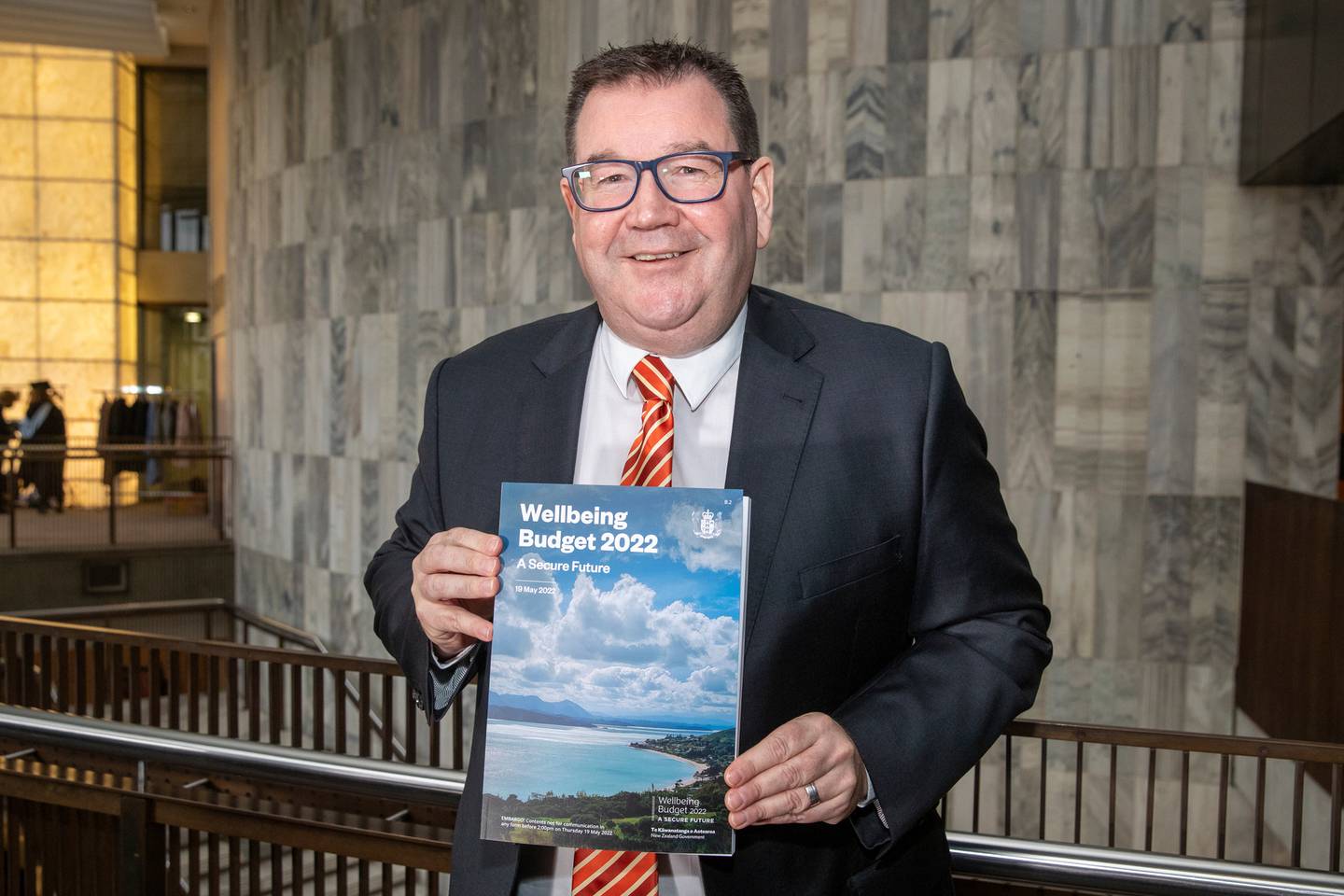 Finance Minister Grant Robertson with a copy of Budget 2022, ahead of today's unveiling. Photo / Mark Mitchell

"It is also estimated it will encourage more parents to pay Child Support as they know it will go directly to their children," Ardern said.

Sepuloni said the Government estimated around 41,550 sole-parent families will be better off, with a median gain of $24 a week.

The Government's redundancy protection scheme was also a winner, despite final decisions on the scheme not being announced yet. It got $60m for establishment costs.

The justice sector was also given almost $190m for two legal aid initiatives, $41m of which goes to help fund increased demand for legal aid. The rest was allocated to a programme to "make repayments more equitable, by reducing requirements for low-income and vulnerable New Zealanders".

Broadcasting gets a big boost with $327m over three years for the new public media entity that will replace both RNZ and TVNZ.

The funding will come as a significant boost to RNZ, which currently operates on less than $50m a year (the new funding works out at more than $100m a year). It is not clear if this funding is in addition to RNZ's existing funding, in which case it would effectively treble RNZ's budget to about $150m a year.

What is unknown, however, is the extent to which merging TVNZ's television production costs into the entity will draw down on this new resource.

TVNZ operates on considerably more funding than RNZ, which it earns from advertising.

The new public media entity will merge these two revenue streams, taking in both public funding and advertising, however Broadcasting Minister Kris Faafoi has said "non-commercial" programming will be protected suggesting it may have to survive on somewhat less funding than TVNZ once earned.

Faafoi said the new entity would be switched on in 2023.

The Government is forging ahead with feasibility studies for the long-awaited shift of Auckland's port.

Defence got more than $600m, mainly to improve existing infrastructure and meet cost pressures. Vietnam veterans were given $37.5m for ex-gratia payments for people suffering hypertension or monoclonal gammopathy.

Both the GCSB and NZSIS were given funding boosts. The GCSB got $18.9m to maintain and improve "information security services" from the threat of cyberattacks.