The Government has chosen its preferred option for a new mass transit service from the city centre to Māngere.

It's a light rail line that will run in tunnels all the way from Wynyard Quarter to Mt Roskill, roughly following the route of Sandringham Rd, not Dominion Rd.

It will then proceed on surface track along the route of State Highway 20, deviating to stop at Onehunga and Māngere townships before continuing to the airport.

The Government says this light rail option will see transport available every five minutes from about 18 stops - cutting travel times from the CBD to the airport in half for many commuters.

In another announcement today the Government has brought forward the timetable for a second harbour crossing and intends to make the key decisions next year. Artist's impression of the main Sandringham Rd shops near the proposed site of a light rail station. Image / supplied

Announcing the decision today, Infrastructure Minister Grant Robertson said the line would help in "preparing for and safeguarding our country's economic future today".

Transport Minister Michael Wood said the Government was "proceeding with the option recommended by the Auckland Light Rail Establishment Unit".

"Our largest city needs a linked-up rapid transit transport network that will serve Aucklanders into the future, making it faster to move through the city, connecting communities, providing greater access to businesses, all while reducing congestion," Wood said.

A "support package" for affected businesses will be created.

"Addressing future disruption is front of mind for the Government, and designing a support package alongside business will be a major part of this engagement in 2022," said Wood.

"We are making a commitment to businesses in the area that significant disruption will be addressed through a comprehensive package, including direct financial support." 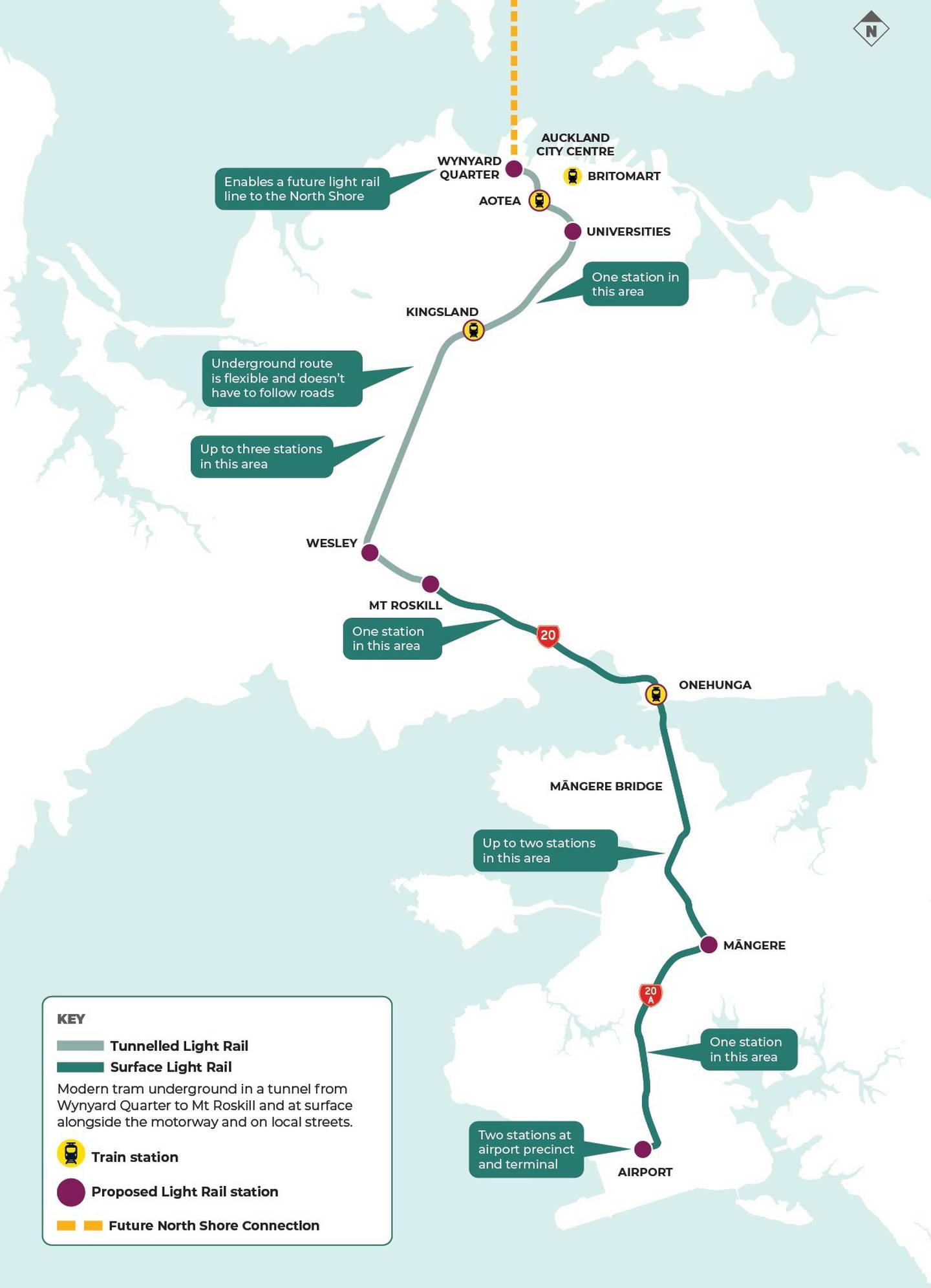 The route of the new light rail line. Image / supplied

The new line, known as City Centre to Māngere (CC2M) will have 18 stations or stops, with trains able to run every five minutes.

It will be capable of carrying 12,000 people per hour, which the Government says is four times more passengers than can be carried on a dedicated busway or "trackless trams".

At about 11km, the tunnel will be the longest in New Zealand.

A detailed business case will now be prepared. It is not clear yet when digging will start, or how long the project will take. The ALR Establishment Unit put the cost at close to $15 billion.

In choosing this option, the Government has rejected an even more expensive "light metro" underground option, which would have been faster and had slightly fewer stations.

It has also rejected a much cheaper surface light rail option, which would have run on Queen St, and then on Dominion Rd or Sandringham Rd.

Robertson and Wood have also revealed the Government has brought forward the timetable for an additional harbour crossing and intends to make the key decisions next year. 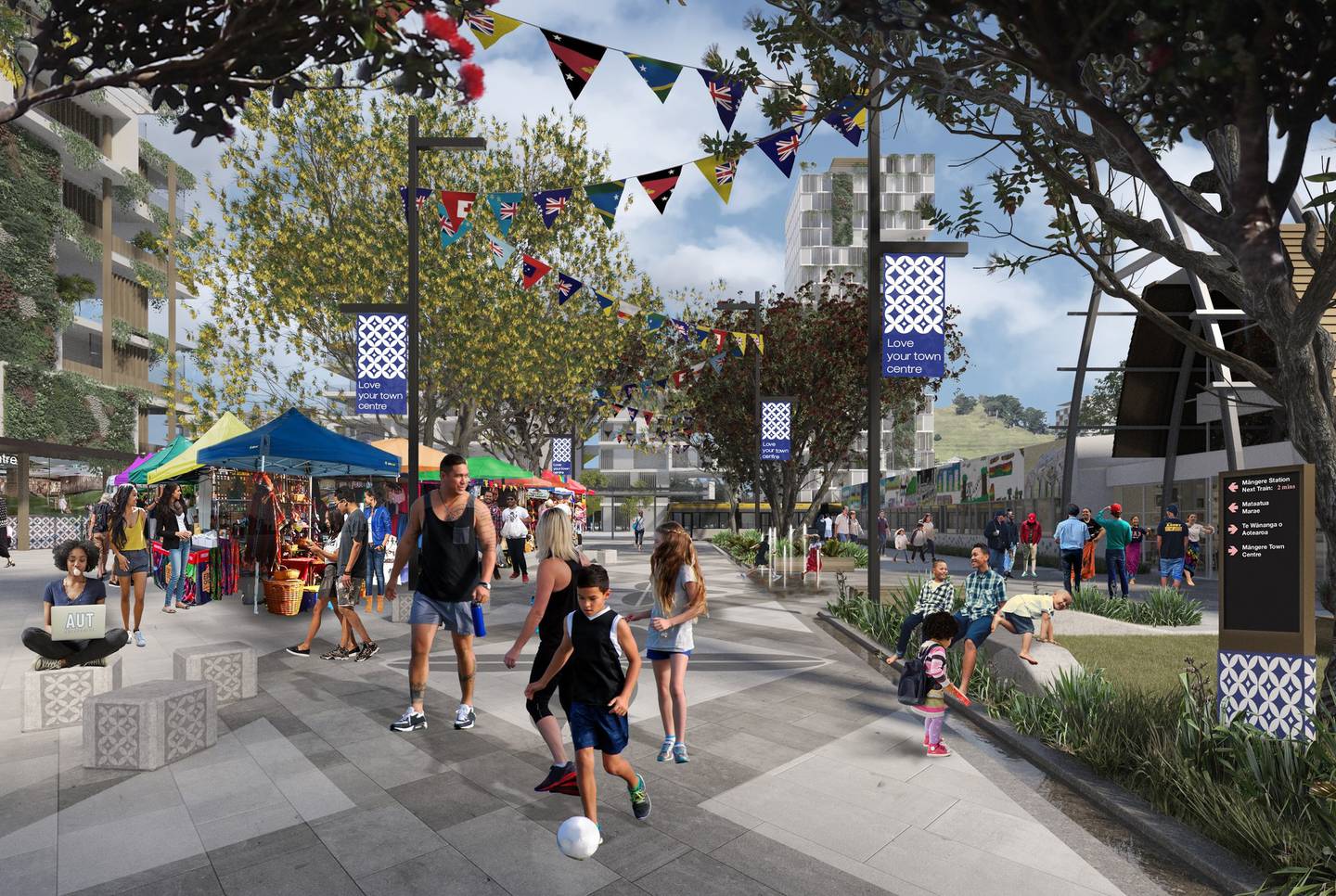 Artist's impression of Māngere town centre near the site of the light rail station. Image / supplied

This will include choosing a route, deciding on tunnels or another bridge, and confirming what transport modes will be able to use the crossing.

Tunnels are currently the favoured option. The crossing will be for mass transit but could also carry cars. The likely option for transit is a light rail service.

Robertson said the CC2M light rail line would "integrate with other major infrastructure projects across Auckland, like the additional Waitematā Harbour crossing".

This will enable a second transit service to be developed on the North Shore, complementing the Northern Busway.

This means the CC2M light rail line is likely, in time, to be extended across the harbour to the Shore.

"The Northern Busway is growing by 20 per cent a year," said Wood, "and will run out of capacity in 10-15 years, so new transport options for the future are needed."

There is no news for commuters in the northwest corridor, although a dedicated bus lane is being constructed now on parts of State Highway 16.

The announcement means Auckland will have three mass transit systems: the existing rail service, the new light rail, and rapid bus lines. Further light rail and bus lines are planned for the future. 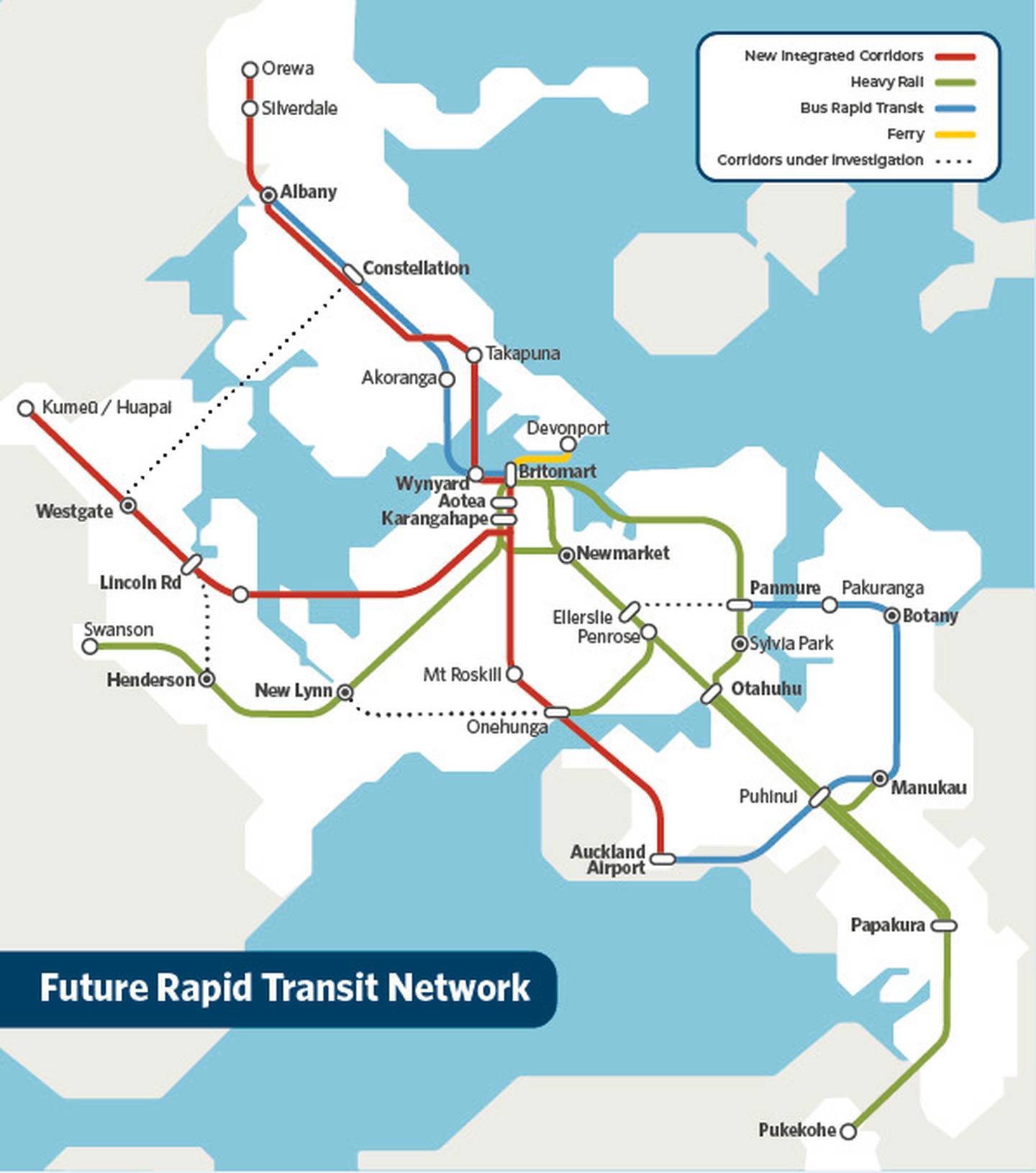 In time, the new light rail line and new harbour crossing will be part of a wide network of mass transit services, including heavy and light rail, and rapid buses. Image / supplied

All of the "new" projects are already contained within the Auckland Transport Alignment Project, but the announcement today signals there will be progress, at last, on CC2M light rail, and faster progress than was planned on the new harbour crossing.

"City Centre to Māngere Light Rail is the critical link needed to develop a rapid transit network around the city to prevent future gridlock.

For more than 50 years Auckland's rapid population growth had not been matched by investment in transport infrastructure.

This resulted in congestion and more than 40 per cent of the city's carbon emissions coming from transport.

"These are two of the biggest challenges facing the city, and can only be addressed by transformational change, which the light rail project is part of.

"The city's other major challenge is for more and intensified housing to stop sprawl. The light rail corridor will enable housing intensification, which will cater for 200,000 additional people within the city, a quarter of the city's projected future growth.

"It will also enable access to a forecast 97,000 extra jobs which will be created in the corridor," Goff said.