Kate Gourdie said she'd stepped aside as Molloy's director of communications due to his decision to take a "new approach".

Molloy has also reportedly parted ways with the digital group working on his mayoral bid called The Digital Company, while last month businesswoman June McCabe stepped aside as his campaign chair.

"As Leo is taking a new approach to media relations and communications, I decided it was a good time for someone else to step in and run it so I can pursue other opportunities," Gourdie said.

"I am proud that, together, the team delivered two very good poll results for Leo, that show this race is his to lose. I wish him all the best with his campaign."

The resignations come as Molloy has courted controversy but also garnered media attention and recognition among voters.

That has included Molloy making an expletive-ridden appearance in a TV interview with comedian Guy Williams and seemingly taking over the website domain name of rival Efeso Collins. He also met with Destiny Church leaders in a video suggesting Covid-19 isn't as dangerous as has been made out and become involved in a spat with the Auckland Ratepayers Alliance after it posted an ad in the Herald claiming Molloy's policies were "unaffordable".

McCabe last month told the Herald she stepped aside as Molloy's campaign chair by mutual agreement but remained his friend and supporter.

She pointed at the time to a Ratepayers' Alliance Curia poll showing Molloy was in second place among preferred mayoral candidates behind Collins.

"I thought he was doing really well, but he needed to find a go-forward position to help him go to the finish line." 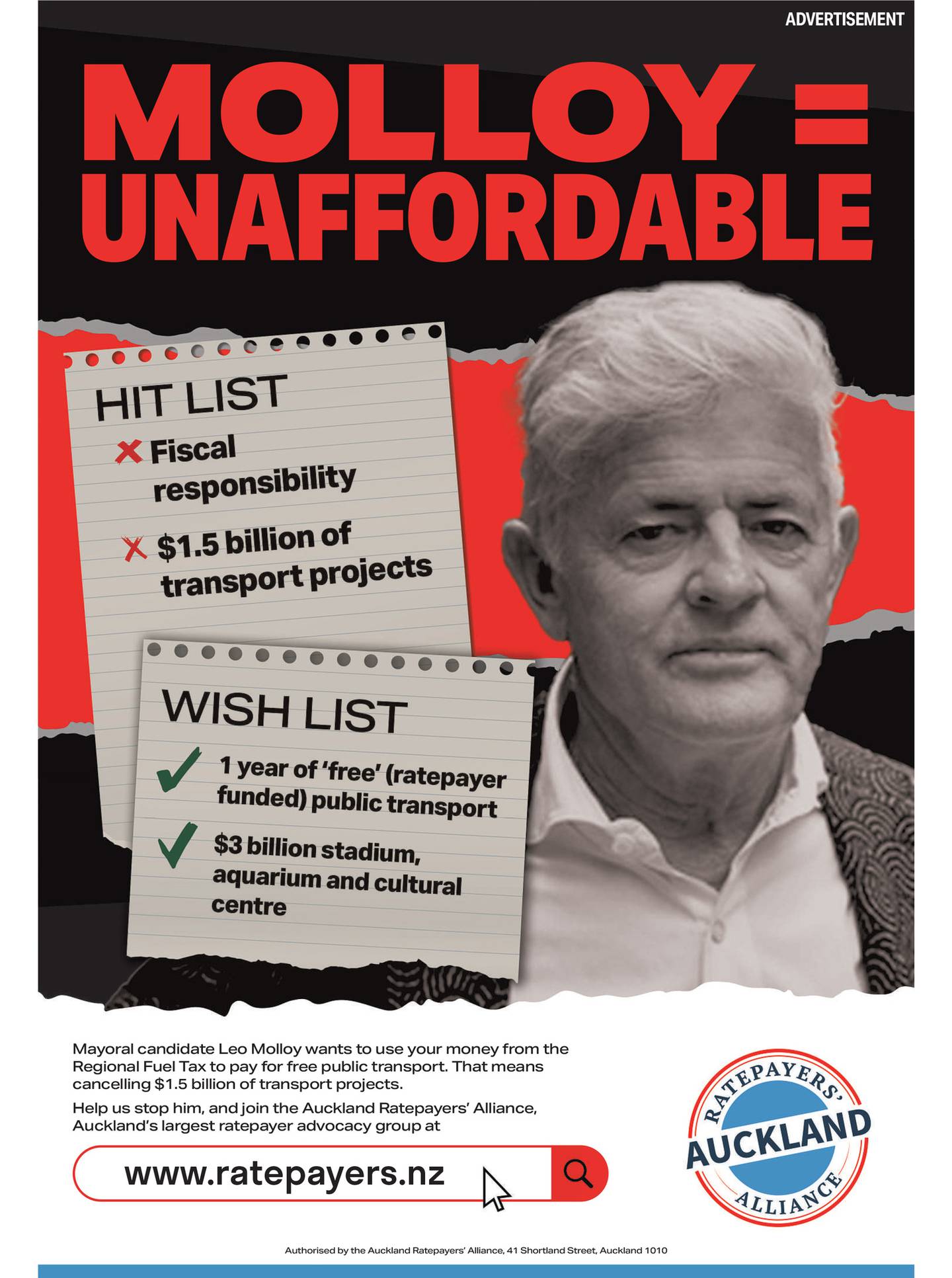 A political advertisement by the Auckland Ratepayers Alliance in July attacking policies put forward by Leo Molloy as part of his run as Auckland Mayor. Photo / Supplied

Media outlet Newsroom also reported that Jordan Williams, the chief executive of The Campaign Company had said his team had also "respectfully parted ways" with Molloy.

The company had earlier been working on Molloy's campaign.

The Herald revealed in mid-July that McCabe had stepped aside.

She said Molloy's appearance in TV3's New Zealand Today comedy show hosted by Williams played no part in her leaving the campaign, saying she only saw it when it screened.

McCabe said she had known Molloy for about six years, saying he would always be a mate - "He is a good guy and wants what is best for Auckland".

In his television appearance Molloy hit out at people he deemed "woke" and claimed Auckland had been hampered by a succession of "soft-****" mayors during the interview with Williams.

It was an appearance which led to opponent Wayne Brown calling for him to quit the race.

Brown told Newstalk ZB's Simon Barnett at the time that Molloy should stand down because his behaviour and language was inappropriate and the city had already had a mayor who had embarrassed the city, referring to Len Brown and his well-publicised affair with junior staffer Bevan Chuang.

"If your judgment is such that you'll go and do that sort of stuff publicly then you've got no judgment," Brown said.

"We've already had one mayor who's embarrassed Auckland with his behaviour, we don't need another one."

Molloy laughed off Brown's call, describing his rival as "a dead man walking" and said it was Brown who should hold up a "white flag" and surrender from the race.

"Does he understand what comedy is?" Molloy asked.