Auckland mayoral candidate John Tamihere has proposed selling Ports of Auckland to a private company but keeping its waterfront land in public hands.

In his latest policy announcement, Tamihere today said the best way to future-proof the 77 hectares of prime waterfront land was to split the council-owned business from the land and go to market with the business.

Under his proposal, the new port owners would lease the land from council at a commercial rate for up to 25 years to develop an agreed exit strategy.

"The Ports must move, but exactly where it moves to will be part of ongoing discussions," he said.

"But I have to give clarity and direction so we can all plan for the next 25 years."

Other advantages would be to de-risk the costly relocation of the port, give council a financial stream from the leased land (council currently gets a dividend of about $50 million a year from the port), open up 77ha of land for ratepayers to decide its future, and establish a "transition fund" to support port workers into new jobs, he said.

A Future Port Study commissioned by Auckland Council in 2016 found moving Ports of Auckland to a new "super port" in the Manukau Harbour or the Firth of Thames would cost $4 billion to $5.5b.

Tamihere said he has met major stakeholders, including port executives, the Maritime Union and transport groups to brief them on the policy. No one opposed it, he said. Tamihere's policy cuts across a ports study set up by the Government to look at how the existing ports at Auckland, Marsden Point and Tauranga – and the road and rail links between them – could be reconfigured to provide the best options for long-term growth.

The first of three progress reports from a working group in April suggested an inland port in west Auckland and a vehicle importing and servicing centre at Northport among a dozen potential transport investments to improve freight handling in the upper North Island.

The working group plans to report back to the Government in June with options and complete more detailed costings and recommendations in September.

The study was set up under the coalition agreement between Labour and New Zealand First, whose leader Winston Peters gave a "cast-iron commitment" at the 2017 general election to move container operations from the Ports of Auckland to Northport by 2027 if his party was in a position of influence after the election.

"The days of the Ports of Auckland as a container port and as a car yard are numbered," the Northland MP said. 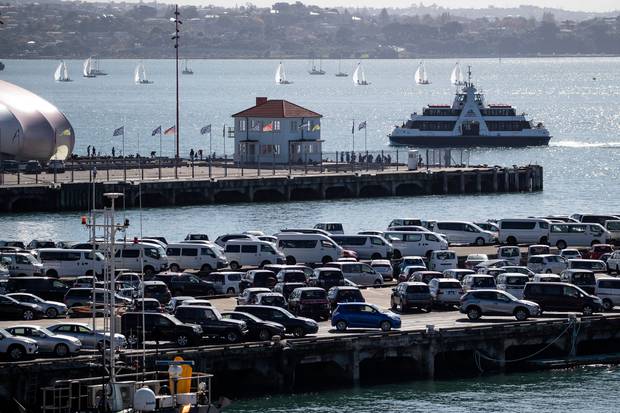 Imported cars lined up at the Ports of Auckland on the Captain Cook Wharf in front of Queens Wharf. (Photo / Jason Oxenham)

Tamihere also outlined congestion around the Ports as a major issue within Auckland and finding a way to decrease traffic in the area was important.

"We are a city that never sleeps and like the Ports operations, we must be to the forefront of this conversation," Tamihere said.

"Auckland Transport forums and the major Ports carriers agree congestion is a major problem and are identifying ways to work through a self-regulatory system."

Tamihere, who is mounting a serious challenge to Mayor Phil Goff's bid for a second term, has already announced he will "shake-up" the way council runs, turn Eden Park into the city's main venue for sports and major events and sack the board of Auckland Transport.

Other mayoral candidates include businessman John Palino, who is standing for a third time, Joshua Love, John Lehmann and Craig Lord.

Lord has announced a policy to keep speedway at Western Springs and scrap plans to move cricket there. He also wants to make it easier for Eden Park to hold concerts.