Act Leader David Seymour is considering going directly to the police over whether donations given to the New Zealand First Foundation were lawful.

"One way or another, someone has to get at what those people [donors] were being told because they could have been misled when they made their donations."

He told the Herald it was important to know what the donations were being used for.

A police complaint could mean the authorities would be forced to look into the issue and make a decision to investigate further, regardless of what the Electoral Commission says after it has looked into the matter.

This comes after Stuff reported that the NZ First Foundation appeared to have hidden political donations worth almost half a million dollars between April 2017 and March this year.

Many of these apparent donations to the foundation do not appear on the party's electoral returns. Act Party leader David Seymour said it was important to know what the donations were being used for. Photo / Mark Mitchell

Stuff also revealed that money from the foundation had been spent on office furniture, staff overtime and legal bills.

But New Zealand First Leader, and Deputy Prime Minister, Winston Peters remains steadfast in his defence, telling media at Parliament any notion of wrongdoing by NZ First was "fake news".

He said the Electoral Commission would exonerate the party and New Zealand First will be working with the commission "soon".

It's unclear when a meeting will be, or if Peters will be part of that, given he will be travelling to Japan on Thursday.

But police could still get involved.

He added that the Electoral Commission has a statutory obligation to report suspected offences to the police – "but for anyone else, it's up to them to do so".

This was seen this time last year, when now-Independent MP Jami-Lee Ross took concerns he had with National Party donations directly to the police, who then referred that to the Serious Fraud Office.

Meanwhile, data compiled by the Parliament library reveals the total amount of anonymous donations New Zealand First received in 2017 dwarfs that of all other political parties combined.

New Zealand First received $342,129.27 worth of anonymous donations that year.

That compares to $28,270 for the National Party and $26,400 for Labour, the data compiled for National's Nick Smith shows.

Under New Zealand's Electoral Law, any donation to a political party more than $15,000 must be declared. Anything under that, however, remains anonymous.

Political commentator and public relations consultant and lobbyist Matthew Hooton told Newstalk ZB his company, Exceltium PR, gave $10,000 to "either the New Zealand First Party or the Foundation – I'm not sure who it was".

When contacted by the Herald, Hooton would not comment further on the donation.

Property investor and rich lister Sir Robert Jones told the Herald that major political parties have always hidden the names of major donors as they "want to avoid the impression of being beholden to them".

Jones himself was at the heart of the 2008 NZ First donation scandal. At the time, it was revealed that Jones – along with fellow rich lister Owen Glenn – had donated to the party.

"Conversely, the donors have an image concern, the cynical assumption being they want something in return. Sometimes that's the case but not always, rather the motive is simply supporting the system," he tells the Herald. 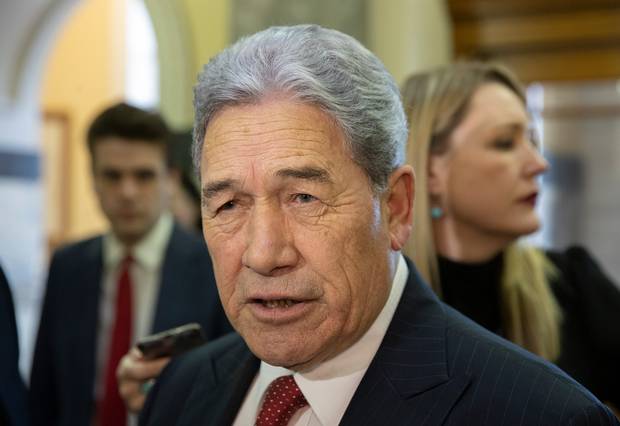 The Prime Minister is now also embroiled in the saga, forced to defend Peters.

National Leader Simon Bridges in the House today repeatedly asked Ardern if she had confidence that her Deputy Prime Minister – Peters – was acting within the law at all times.

Ardern would not directly answer that question.

Instead, she said she was only going to reply to questions that she, as the Prime Minister, had responsibility for.

Ardern replied: "The member [Bridges] has been asking questions more broadly around issues of electoral law – as I say I'm not the arbiter of that."