In the time it took for a Taranaki couple to bath their baby, their world was turned upside down.

Minutes later Toby and Laura Leadbetter are giving their 11-month-old son, Zephyr, a bottle to calm his unusual grumpy mood. A quick check of his nappy, saw it filled with blood and the family racing off to Taranaki Base Hospital earlier this month.

And while Zephyr returned home at the weekend, he was back in hospital last night with an infection and doctors today deciding how bad it is.

Toby Leadbetter told the Herald up until Sunday, April 5 - the first day of daylight saving - their son had been happy, healthy with a personality so infectious he'd charm the pants off anyone.

But while giving him a bath that night, his normally rambunctious boy just became "really flat". Laura Leadbetter and son Zephyr in hospital after his surgery to fix his umbilical cord which had been puncturing his intestines. Photo / Toby Leadbetter

"We thought maybe he was just tired from daylight savings, the extra hour. We bought him out and fed him his bottle before bed like we usually do and then he just started violently vomiting and pooing."

Given the sudden escalation, Leadbetter rang his Dad, who is a doctor.

"And during that time my wife, Laura, just sort of instinctively went to check the nappy and it was filled with blood, and my dad was like 'take him straight to hospital'."

Due to Covid-19 lockdown restrictions, only his wife could go in to Taranaki Base Hospital with Zephyr.

After carrying out some initial tests, Zephyr appeared to come right.

He left but an hour later he got a frantic phone call from his wife, saying their son was now profusely bleeding out of his bottom.

"Laura was like 'I think we're going to lose him' and I rushed in and luckily I was allowed into the hospital.

"It was just heartbreaking looking at him being so scared and terrified and no one really knowing what was wrong with him. They couldn't get anyone to scan or ultra sound him in New Plymouth until the morning but they obviously made the right decision and escalated it to Waikato Hospital."

As Zephyr and his wife were being airlifted, Leadbetter got in his car and drove on the "eerily quiet" roads to Hamilton.

By the time he got there, Zephyr had stabilised. They would soon discover he had meckels - a congenital defect where the leftover umbilical cord punctures the intestine.

"That's what he'd got and got it really, really badly."

However, again, he wasn't allowed into the hospital to be by his son's side, or to assist his wife, "who hates blood".

"There was blood all over the show. Just not being able to be in the hospital was just torturous, you just wanted to be there to hug and support and relieve them."

He said their experience with their son brought home the seriousness of the lockdown and, despite not having access to his family, he knew why it had to be done.

"I guess until it's happening to you or a loved one it can be something that you don't really take as seriously as maybe you should.

"On the first weekend I snuck out for a surf and then I did feel bad and haven't done it since but when I look back on it, it's kind of like 'what are you doing, they're not asking you to do much'.

"At the moment there are a lot of people who are by themselves, people are dying by themselves, giving birth by themselves, just going through these situations where you do need family and support and friends and its at those moments when you need it most and you can't have it when it all sort of sinks in." 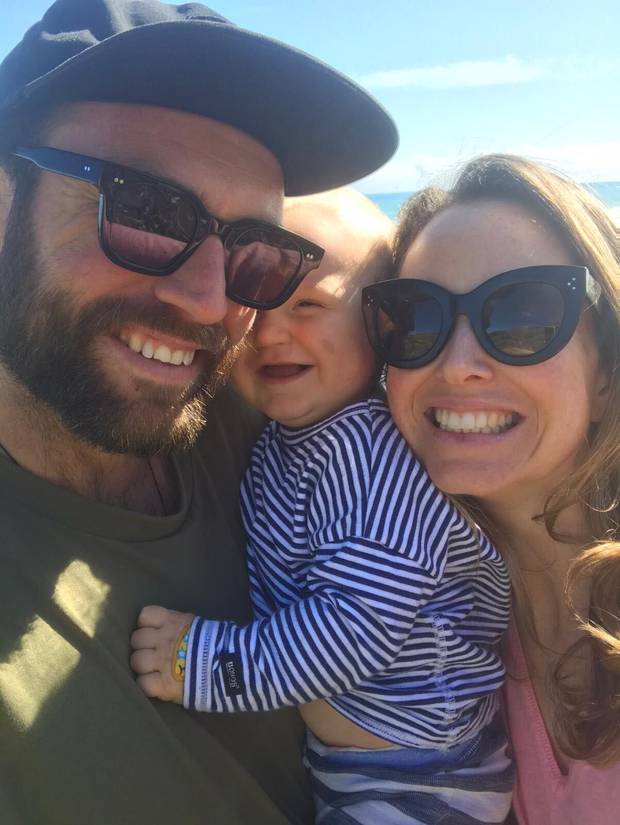 Toby and Laura Leadbetter with their 11-month-old son, Zephyr, who was last night admitted into Taranaki Base Hospital with an infection. Photo / Toby Leadbetter

Leadbetter said he was finally able to pick his wife and son up from Waikato Hospital on Saturday.

However, last night Zephyr was again hospitalised. This time with an infection.

"It's pretty gut-wrenching and terrifying.

"Last night kind of bought it all back, but hopefully he'll be fine. They're going to run some tests and scans this morning."

Leadbetter, who turns 32 tomorrow, now just hoped that he could have the best birthday present of all - his son back home.