On Sunday a group of vegan protesters caused a national debate after storming St Lukes Countdown and blocking shoppers from the meat section.

During a tense standoff, vegan activists held up signs which said "stop eating animals" and "it's not food, it's violence".

The news made international headlines and has since caused a stir across the globe.

Media from around the world including Australia, the UK and the US weighed in on the incident, with many questioning the hostility of the protesters.

Across the ditch, one Today host on Nine News slammed the protesters as "vegan vigilantes" and said he wouldn't have been so patient as the customers in Countdown.

"I'll give those cameramen something to aim their cameras at. If a vegan came between me and a lamb roast I would open him like a tin of beans. It would be on for young and old," he said on Today.

"I choose to eat the beasts. Let me at them. Vegans are very passionate, and I understand why but really they must have eaten so much tofu to get the energy up to protest."

Aussies also weighed in on the debate, with one saying while they sympathise with vegans and the animals that are killed, the protesters' approach is a turn off. 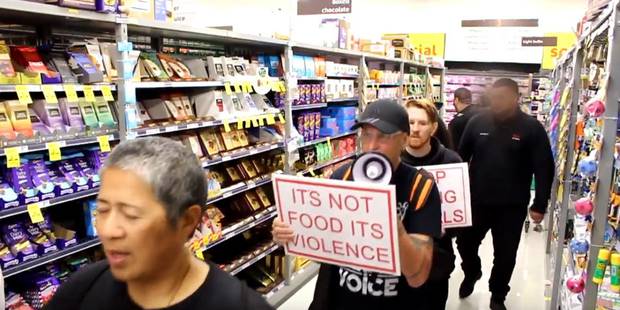 "I'm all for your views, but you cannot force them upon others in this manner. What would they say if we barred them from the fruit and veg section?"

The news reached the US, with a number of Americans having a say.

While someone praised the move as great marketing, others believe the stunt was only going to harm the vegan movement.

"Why can't these people understand they are doing nothing to promote their cause. You don't eat meat, your choice. I will not question your decision, however you do not have the right to question my decision," one Texas resident wrote.

"I understand why they want the world to turn vegan but ramming it down the throats of meat-eaters will only turn them off the discussion."

Another pointed to freedom of choice, saying the vegan protesters did their best to deny meat-eaters the choice to buy what they wanted.

Thousands of punters from the UK joined in on the debate, with a number of people referencing humans' biological make up as an argument for eating meat.

"We as humans have canine teeth, incisors and molars. Our digestive system is capable of digesting meat. We have a brain. The brain can tell us 'we don't want to eat meat' or it can decide 'yes we do want to eat meat'. It's a personal decision. As a meat-eating being, I choose to eat meat. That's my right.Those that don't want to have their right to chose not to. End of discussion!"

Back in New Zealand, the duo behind a fiery vegan protest are not about to stop their activism, and have plans for more action soon.

Anna Rippon, a vegan since January last year, defined their stance as not just being vegan - but animal activist vegans.

"We wanted to go in and pay our respects to the victims in the chiller, while at the same time raising awareness to the general public – because in this day and age there is no reason to exploit animals for food," she said.

"It's too easy for people to ignore so we were creating a disruption to get people talking about it.

"It's planting a seed so people start thinking for themselves. It's a bad habit that needs to be broken."