Drivers using Auckland's Harbour Bridge have been urged to take care as strong winds hammer the structure, while wild winds have brought down trees in Wellington and Hamilton.

And a group of people are trapped in a vehicle that was crushed by a falling tree near Hamilton International Airport about 2.23pm.

The tree has blocked the Airport Rd near where it intersects with Raines Rd, in Rukuhia, and people are being urged to avoid the area.

It's unclear how many people are stuck in the vehicle.

A whopping 400mm of rain has fallen on mountains on the West Coast as a storm batters the country, raising rivers to alarm levels in many areas. The gusts of wind in Wellington are so strong they have apparently cracked a window in Wellington's tallest building, the Majestic Centre. Photo / Facebook

A severe weather warning is in place for the Wellington region, with gales already reaching 137km/h in parts of Wellington, with winds still at dangerous speeds on the Rimutaka Ranges.

In Auckland the NZ Transport Agency tweeted that drivers of high-sided vehicles and motorcyclists should be extra careful due to strong winds on the bridge.

In Wellington, Air New Zealand flights are cancelled until mid-afternoon.

The airline said it would be running additional services for later this evening to accommodate disrupted customers and will continue to explore additional capacity as the day continues.

Jetstar services appear to be running as scheduled.

While the rain is falling at incredulous levels along the West Coast, it's also falling in areas where it's much needed including Blenheim - which has received 16mm in the last 24 hours - and Hawke's Bay. However, it's unlikely to help any of the parched landscape in the area, especially with temperatures in the 30s forecasted for Thursday and Saturday.

Parts of Canterbury were also getting a bit of rain.

Cold front is moving onto the North Island now, bringing a period of rain, possibly heavy in the high country, to go with the strong winds. Did someone say summer?! https://t.co/prKU7O2R01 ^RK pic.twitter.com/KyMXn7XjqO

Ferris said while much of the heaviest bouts of rain has fallen in the South Island, much more rain is expected each day for the rest of the week, with brief reprieves in between.

The North Island could also expect showery weather off and on for the next week as the storm passes by. Northland and Bay of Plenty can expect some rain on Thursday and Friday.

Across the rest of the city, the wind had downed trees in Makara, Strathmore, Island Bay, Thorndon, and Hataitai.

The council also reported a street light down in Aotea Quay and damaged power lines in Tawa and Hataitai.

Strong Wind Warnings and Watches are in place across central New Zealand for today, with gusts recorded well over 100kmh in the Capital. Further Warnings or Watches may be issued For Canterbury, Marlborough and Wellington for tomorrow. https://t.co/qHyE5zhh6X ^RK pic.twitter.com/Y2NwpkXxss

"We recommend the public only ventures outside if they really need to, and to use the FixIt app to report any issues they may see."

On Tuesday morning, MetService meteorologist Tahlia Crabtree said the gusts had been reaching 83km/h at Wellington Airport, which is what people around the city would be feeling.

It's been a 🌧 morning along the West Coast. A number of weather stations in the Alps have each recorded 250 - 400 mm of rain over the last 24 hours! https://t.co/prKU7O2R01 ^Tahlia pic.twitter.com/tdVD4RFdy2

The wind gusts could damage trees, structures that aren't tied down like trampolines and anything that's unsecured."

Crabtree said the winds were expected to ease a little bit this afternoon, with a front moving in. The weather warning is in place until 6pm.

Air New Zealand said it was offering fare flexibility for "the next 72 hours, where customers with cancelled flights will have the option to transfer their booking to another date or hold the fare value in credit for up to 12 months toward future travel". 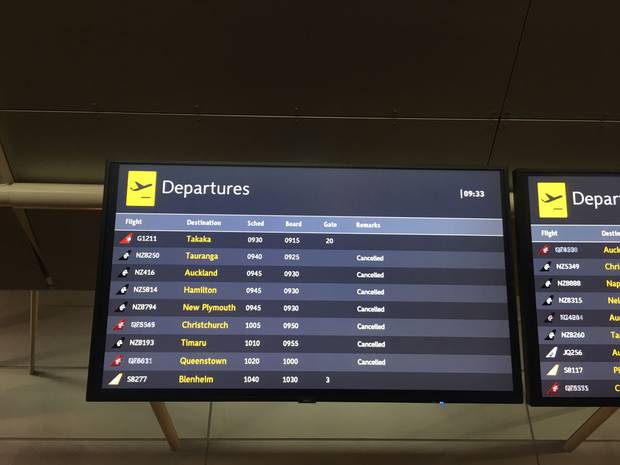 Customers with Wellington flights were strongly recommended to consider deferring non-urgent travel, and those who didn't need to travel, keep an eye on the airline's Arrivals and Departures page for the latest information.

At Wellington Airport, the arrivals and departure lounges were eerily quiet.

One passenger, Felix, said he was heading to San Francisco and then to South America but was left figuring out what to do with his flight cancelled.

"I've been saving up for a year and a half to go travelling all around the world ... so it's a bit stressful."

Brittany Thompson's flight to Auckland was also cancelled, and she had to be at work at 2.30 in the afternoon.

"Now we have to hire a car to drive to Palmerston North and fly from Palmy back to Auckland."