"Freakishly high winds" in Cambridge have been blamed for ripping a healthy oak tree from the ground and crushing an elderly woman – who tragically later died from her injuries.

The woman was initially critically injured after the tree toppled onto a picnic table, where the woman was, in Victoria Square.

Emergency services rushed to the scene shortly after 10am.

Northern Fire and Emergency shift manager Jordan Barnett said a fire appliance and two support vehicles were among the response.

"Police can confirm a woman has died from injuries sustained after being trapped under a tree in Cambridge."

The death comes as bad weather – including strong winds – wrecked havoc in areas of the North Island; including a tornado that hit Levin this morning.

Richard and Trixie Millet had parked their campervan in front of the fallen tree in Cambridge's Victoria Square, possibly just minutes after it hit the ground.

At the time the pair were unaware a person was stuck underneath.

Two trees had fallen but at that stage – around 10am – no emergency services were at the scene and there was no indication someone needed help.

They walked to a nearby cafe, but when Richard returned to the camper, he knew something was wrong by the presence of emergency services staff digging with shovels around the base of the fallen tree, presumably to free the woman.

"It was devastating that I wasn't aware that someone needed help, that we could have called emergency services earlier," he told the Herald.

Richard rushed back to the cafe and informed Trixie and the friends they had been meeting. 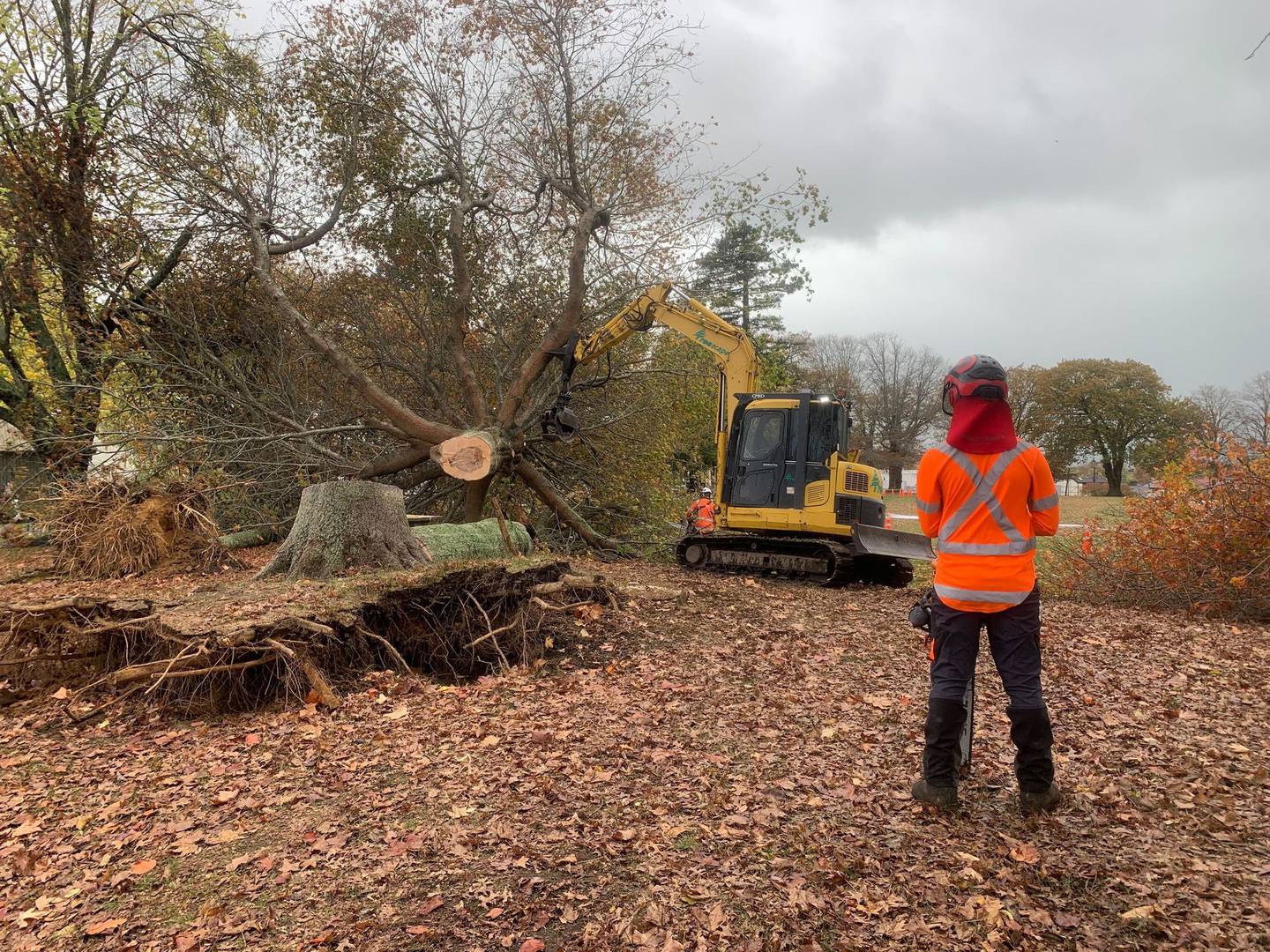 Contractors remove the tree which tragically struck and killed an elderly lady in Cambridge this morning. Photo / Adam Pearse

Seeing their camper parked near the site, Trixie overheard people's assumptions it had been those in the camper who were in strife.

Following that, Trixie quickly sent a text to the family, informing them that they were okay.

The pair said they "felt deeply" for the woman and her family, hoping she would be okay.

Arriving at the scene, the pair – from Rissington, Hawke's Bay – had been unaware a small tornado had torn through the small town.

However, they described very strong gusts and squally conditions.

Tree was healthy and had been pruned

The tree was a healthy pin oak that was about 80 years old.

It had been pruned at the start of April and there had been no previous concerns about it, council group manager customer and community services Sally Sheedy said.

"It has been described to me as a mini-tornado which look to have lifted a perfectly healthy tree out of the ground. Our concern and thoughts now are with the person who was trapped and we sincerely thank those who acted so quickly to help."

Sheedy confirmed there were also reports of at least four more trees down in Hall St.

Council contractors were at the site and waiting for lines company Waipa Networks to isolate power before the clean up could begin.

"Those with queries about power supply should contact Waipa Networks directly. In the meantime, we are asking people to avoid the Hall St and Victoria Square areas so we can help deal with the damage," Sheedy said.

"In the meantime, council staff are now out checking on all other trees and parks in the area. We are urging people to be cautious and safe and to report any concerns to us immediately."